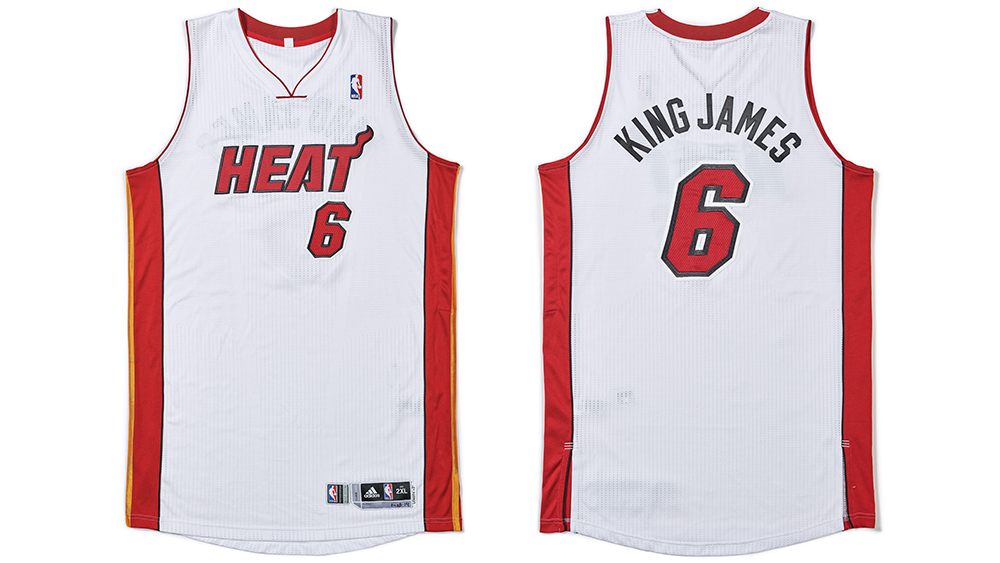 Calling all basketball fans: One of the most iconic jerseys LeBron James has ever rocked is about to hit the auction block, with a royally high estimate of $200,000.

The rare “King James” jersey comes from the legendary “Nickname Game” that took place between the Miami Heat and Brooklyn Nets on January 10, 2014. During the match, players donned jerseys emblazoned with their best-known monikers. This was the first time James wore his princely nickname on the court and represents a key moment in basketball history.

While wearing the jersey, James scored 36 points and had five assists against the Nets, alongside teammates “Big Ticket” (Kevin Garnett), “J. Shuttlesworth” (Ray Allen) and “Truth” (Paul Peirce). This game is one of a handful of instances in which James has played under his sporty sobriquet.

With bidding starting at just $1, the rarity is expected to collect between $150,000 and $200,000. It will be sold in Sotheby’s From the Archive series, which will see five pieces of rare memorabilia auctioned in single-lot sales from July 20 to July 24.

“We have an incredible week of drops lined up, with each item speaking to a different area of contemporary culture, ranging from sports to film and music,” Brahm Wachter, Sotheby’s director of eCommerce development, said in a press release. “The rarity of the pieces is spectacular, kicking off with the famous ‘King James’ jersey that perfectly captures LeBron’s unquestionable legacy as one of the greatest athletes in the history of the sports.”

Game-worn garb has been flooding the auction houses of late and attracting a very pretty penny indeed. Back in May, Sotheby’s sold a pair of Michael Jordon’s sneakers from 1985 for a staggering $560,000, eclipsing the original high estimate of $150,000 by more than three times. Christie’s is also offering a landmark sale of Jordan’s game-worn trainers in the Original Air auction that will take place in late July.

Check out more images of the items below: