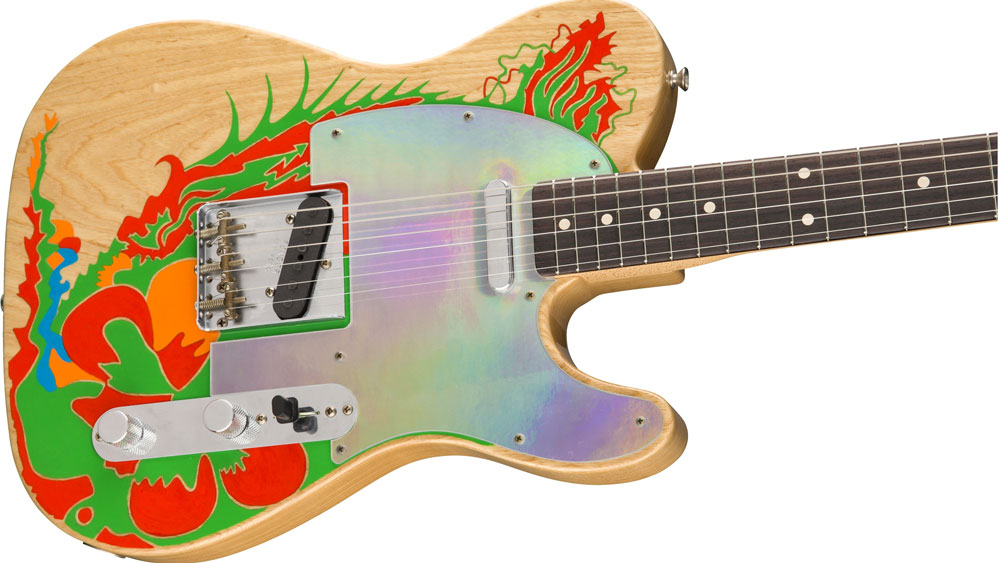 Want to own a piece of rock n’ roll history? Led Zeppelin’s Jimmy Page teamed up with Fender to recreate his original 1959 Dragon Telecaster guitar that he played throughout the band’s first album released 50 years ago. It’s the guitar that brought to life legendary songs like “Communication Breakdown,” “Dazed and Confused,” and “Babe I’m Gonna Leave You.” It’s the instrument that Page played from his early days in the Yardbirds to the career-defining first album, Led Zeppelin I, that would solidify him as one of Rock n’ Roll’s most iconic guitar players of all time.

The 75-year-old guitar player hasn’t played in public since he performed “Whole Lotta Love” at the 2008 Olympics, according to Business Insider. One of his current hobbies? Painting. One of the key elements of the new Dragon Telecaster features that other artistic inclination with the remake of the psychedelic red, orange, green, and blue painting (meant to evoke a dragon) that Page painted onto his Telecaster in mid-1967. He topped it off with a clear-plastic pickguard-protecting shimmery foil. Before that, Page had decked out his guitar in circular mirrors before stripping it to make way for “The Dragon.”

Two models—the early mirrored version and the hand-painted Dragon—will be produced in the Fender Custom Shop and will be sold as the “Limited-Edition Jimmy Page Telecaster Set.” A set of 50 of each version priced at $25,000 a piece will be available to collectors. Created by master builder Paul Waller, the mirrored guitars will have a Fender tweed case while the Dragon will come with a special display case, a violin bow (one of Page’s favorite tools), and a white seat belt strap and an extra-long leather strap. Both come with Hecro picks, a coiled lead, and signed certificates of authenticity.

Additionally, two production line models will be made available in spring/summer of 2019 for fans and collectors. A pearly white version of the early original, which the company has dubbed “White Blonde” ($2,500), and another version of the dragon ($1,400).

If you’re hoping to one day get your hands on the original Dragon, we have bad news. When Page went on tour with Led Zeppelin in 1969, leaving the Telecaster behind that year, he found that a friend had stripped the body and painted over the dragon. It compromised the wiring and the only working part left was the neck pick up. Page salvaged the neck and put it on his brown string bender Telecaster, which he has since re-stripped and restored. So you are bent on riding the Dragon, you may have to opt for a Page-approved remake of the original.