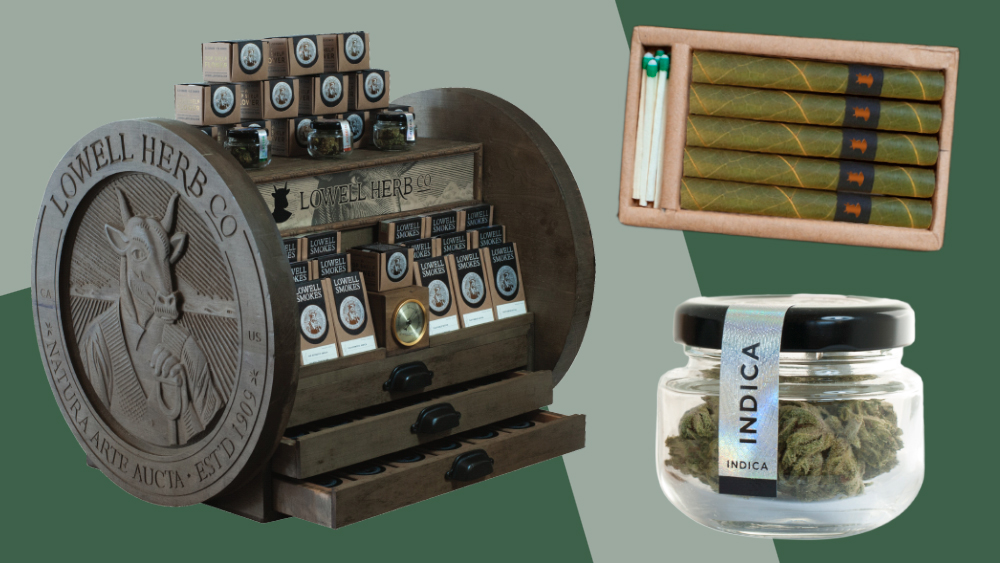 The stunt secured a blitz of national media attention: Buzzfeed boasted that it took the flower crown “to a whoooole new level,” while Vice dubbed it “a festival accessory that is actually cool.” The brand even courted the stylish set with slightly sardonic praise from New York‘s The Cut” (“Coachella outfits reach logical endpoint with weed flower crowns”), and Harper’s Bazaar (“Weed flower crowns are a thing now: genius or stupid?”). That query was a valid one, when you consider the attention—both warranted and not—that the pot-adorned headpiece might garner. Adding insult to injury, Lowell received a cease-and-desist letter from festival promoter AEG, forcing it to change its signature product’s name.

Despite those hiccups, Lowell is rolling.

While Coachella may have been the general public’s first glimpse at the artisanal weed brand, the celebrity circuit has been smitten since its inception. Lowell’s flagship product—the luxe Lowell Smokes prerolled packs—instantly connected with Hollywood’s posh stoner set after its launch in 2017, earning co-signs Chelsea Handler, Usher, Diplo, Miley Cyrus, Calvin Harris, Ty Dolla $ign, and Waka Flocka. Now the No. 1 preroll brand in California, the trendy product—modeled after a cigarette pack and offering seven joints with six grams of flower total—is currently sold at more than 300 dispensaries statewide.

The company has cleverly bolstered the online buzz to corner the A-list event market in Los Angeles. Its hip “canna-bars” have toasted fetes like Lil Wayne’s “Wayne’s World”–themed 36th birthday soirée and pop-rock sister trio Haim’s December Planned Parenthood charity event “Haim for the Holidays,” hosted by actress Emma Stone. The brand has also infiltrated celebrity weddings, popping up at singer Miguel’s November nuptials to actress/model Nazanin Mandi. “When you have a wedding in California you gotta have a weed bar,” the singer penned on Twitter, careful to praise the custom strain—the “N/M blend”—that Lowell crafted for the newlyweds.

when you have a wedding in California you gotta have a weedbar. This is the last of our wedding prerolls of my favorite blend. Gonna try my best to save them… What an Incredibly thoughtful gift thank you @lowellfarms pic.twitter.com/dWQozl2bUP

In keeping with its viral origins, the booming brand put further energy into opulent statement pieces around cultural events, creating a $300, 1/8 oz. “tasting flight” to toast the eight nights of Hanukkah, and a 1 oz. “cannabis bouquet” for Valentine’s Day, which is now available year-round. Featuring a blend of wildflower, eucalyptus, and on-the-stem bud, the latter romantic offering earned praise from rapper The Game—a fan of the Strawberry Banana strain. “It’s the most beautiful thing I’ve ever seen,” he shared on Instagram.

There’s more to Lowell’s appeal than online praise and, well, the fact that it’s weed. The company’s retro bucolic design aesthetic has also driven its success. Packaging for Lowell’s core products, designed in-house, turns the once-illicit into the refined. Each of its Lowell Smokes packs is printed in the U.S. on vintage Saroglia equipment using recycled craft paper. “We looked at the chocolate, whiskey, coffee, and wine brands we loved and wondered why the product we cared about the most came in a plastic bag,” says Lowell cofounder David Elias. The rustic farm-to-table allure is further showcased via a broad range of vintage-inspired merch items, from ceramic match holders and wooden rolling kits to a $4,500 humidor and a $15,000 retro vending machine.

The apothecary-leaning branding balances elegance with a folksy, homegrown charm—an ode to the “agrarian Californian pioneer,” Elias says. In 2017, the 45-year-old entrepreneur founded the Hacienda, Lowell Herb Co.’s parent company, alongside partner-in-green Sean Black—a year after California’s Proposition 64, the “Adult Use of Marijuana Act,” first passed. “We saw an opportunity to finally legitimize and normalize the cannabis experience,” Elias explains.

To create Lowell, Elias and Black shepherded the rebirth of William “Bull” Lowell’s San Louis Obispo, Calif.–based farm as a sort of displaced vengeance for a century-old beef. Lowell founded the farm in 1909, but a local official didn’t take kindly to it. That person pushed the passage of the 1913 Poison Act: the legislation that outlawed the growth of marijuana. The law shuttered the farm and landed Lowell in jail.

Today, the company honors Lowell’s mission by continuing to grow cannabis naturally, using only organic fertilizer and ensuring a living wage for all of its farmers. The company began testing for pesticides in January 2017—a full year before it was legally required—and opted to pack their single joints in glass tubes instead of plastic, an aptly green move that increased costs. “It was essential right from the start that we made every effort possible to earn the trust of our customers,” Elias explains of the recyclable, food-grade-certified and BPA-free glass material. “We care more, which has become a mantra for our business.”

The company has also courted consumers with a commitment to social justice. In a bid to combat the War on Drugs’ era of lengthy jail stays for pot infractions, the company launched its “Jobs Initiative” last May with a billboard outside L.A.’s Men’s Central Jail that read: “Recently Pardoned? We’re Hiring.” “If cannabis was discovered today, it would be treated very different, but because of its 20th-century history there is still a stigma, and there are people whose lives are still ruined,” Elias laments. Last June, the company hired its first employee via the program—a former nursing student named Sabrina, who endured a marijuana arrest during college, after her purse was stolen, then recovered (with pot and pipe inside) by her college’s campus safety officers. The fumble cost her a full-ride scholarship. “We talked about the transformation of the cannabis business from black market to regulated industry and Lowell Herb Co.’s part in that,” Elias says of the now-employee, who joined the company’s communications department.

For actress Bella Thorne, the company’s ethics is a main selling point: “I fuck with Lowell Farms for all the obvious reasons—how their company is treated from the inside-out. They aren’t just a ‘weed’ company, they’re helping make a change in people’s lives and their families. That is something I will always respect and support.”

Lowell is poised to continue its rapid boom via new products like Chiefs—their version of a 1-gram tobacco-free blunt, rolled in palm leaves—and a variety pack featuring seven individual prerolls from all-different strains. They’re also expanding their real-estate footprint with the purchase of a 63-acre farm in the Santa Ynez Valley, which will begin to grow this summer. And they just secured a license for an onsite consumption lounge in West Hollywood, set to open in 2020. “We plan to create one of the first high-end destination locations to enjoy cannabis, infused drinks, and food,” Elias adds, with plans to enter new markets across North America later this year.

Beyond lofty reasons like refined aesthetics and wokeness, some of Lowell’s avid consumers just want a good night’s sleep. “I’ve had sleep issues, and the bedtime indica has been a healthy alternative to prescribed ‘sleep aids,’” says photographer and director David LaChapelle, who has helmed music videos for Britney Spears, Jennifer Lopez, and more. “It leaves me feeling great in the morning and I feel a lot happier.”