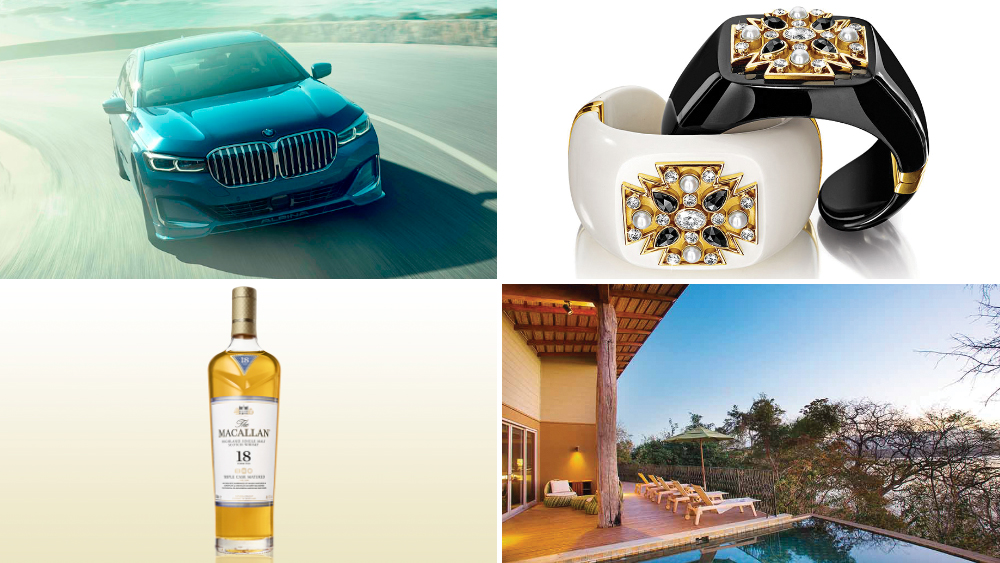 This is a story about inflation. But, we promise, we’re going to make it fun. And it isn’t all bad news. There are plenty of silver linings—platinum ones, even.

Here goes: You’re about to be treated to the first-ever Robb Report Luxury Consumer Price Index, henceforth known as the RRLCPI.

Treated to the what, you say? The national Consumer Price Index is the tool that the number-crunching economists at the U.S. Bureau of Labor Statistics use to determine whether inflation is going up, down or staying the same from month to month and year to year.

These highly trained statisticians tediously pore over the costs of scores and scores of items in a so-called “basket of goods and services,” as reported by tens of thousands of Average Joe and Joanne informants across the country. Most of the items in this basket are as ho-hum as you’d imagine: blocks of cheddar cheese, household cleansers, shaving cream, motor oil, gift wrap, pet food. Selected to reflect the buying habits of a rather general population, these goods and services showed an overall price increase of 1.9 percent over the past year—a relatively modest rate that signals the economy is more or less where it’s supposed to be.

We wondered, though, what current inflation would look like for a more specific—and much more affluent—group of consumers. So we decided to put together the RRLCPI, filling our virtual basket with a carefully curated selection of some of the most coveted goods and services available to those of means and in the know.

As with the national CPI’s basket, we’ve divided ours into a number of categories and then picked a representative item for each. So, for cars, you’ll find a classic BMW 7 series; for jewelry, a Verdura cuff; for restaurants, the top-end tasting menu at Chicago’s three-Michelin-star Alinea.

We compared the current price for the good or service to its price at this time last year, and then calculated a change up or down before averaging it all together to come up with the final RRLCPI number for the last 18 months. So what did we learn?

As it turns out, based on our careful calculations—but, admittedly, not quite scientific method—luxury goods have gone up by 4.58 percent between January 2018 and now. That’s almost two and a half times as much as that year-over-year national CPI of 1.9 percent. We’re sorry to be the bearers of this bad news. But, most of that increase is due to just a couple of outliers, whose prices, for one reason or another, jumped by about 25 percent each. All our other favorites had increases of 6.25 percent or less, and most saw no change at all. You’re welcome.

The tantalizing details are below.

The MSRP of an entry-level 7 sedan increased by $550, just about half the increase from the year before. (The price of a fully loaded version went from $138,800 to $139,350, up by .4 percent.) Even though these increments are small, they’re more than the national CPI for new cars, which actually went down by .3 percent between December 2017 and December 2018. For this vehicle, though, the upped cost seems a small price—especially since it includes the perks of active driving assistance and Apple CarPlay, both previously à la carte add-ons priced at $900 and $300, respectively.

The year-over-year price increase for this plane—one of Robb Report’s picks for the best business jets currently on the market—matches overall U.S. inflation for the last 12 months—great. But it crashes and burns when compared to airline fares, which the national CPI shows as down by 2.6 percent.

Made from a recipe of sea kelp and vitamins developed by an aerospace physicist, this beloved skin salve—produced by a French company now owned by Estee Lauder—has seen a price increase of just $10 since this time last year. But that translates to more than three percent of its 2018 cost. In contrast, the national CPI for personal care items was down by .4 percent. Still, $10 seems pretty damn good.

University trustees approve tuition increases in mid-February every year, with this most recent bump coming [is] in inline with the national CPI’s education increase of 2.6%. Its also smaller than Stamford’s previous jump, which had first-year tuition going up by 3.5%.The tuition numbers don’t include personal and living expenses, however, which the university estimates as $45,207 this school year for a single student in on-campus housing, living what GSB refers to as a “moderate lifestyle.” Guess that doesn’t include career-enhancing networking opportunities like winter-break ski trips to Gstaad, long weekends at the Post Ranch Inn or late-night blue-sky meetings at Nobu Palo Alto.

The price of this minimalist, Bauhaus-chic watch — another Robb Report best-in-show item, this one with design origins dating back to 1932 — hasn’t changed since this particular model’s launch four years ago. That means it’s doing better than the national CPI, which has the cost of timepieces up .5 percent year on year. More good news! And, depending on how you think about it, that almost makes this one a steal. Plus, since Pateks appreciate in value, it’s actually a good investment.

The price of the iconic black jade, diamond, peridot and amethyst version of this bracelet has remained constant since 2015, when it went up $1,000, or about 3 percent. The locked-in price is nice, but the national CPI for jewelry is down nearly 4 percent in the last year. Buying this, though, is like owning a piece of history: Italian Duke Fulco di Verdura designed the Maltese Cross cuff for none other than Coco Chanel herself in the 1930s. And, again, it’s not a bad investment: Similar pieces, even those made within in the last two decades, sell for much more on 1stdibs.

The most sought-after sneakers a guy can wear frequently get flipped for big margins on the secondary market, but classic shoes are a little more stable. While the price of Gucci’s Jordaan leather loafer hasn’t shifted in the past year, it has changed since it was first introduced; you could find a pair on MrPorter.com for $695 back in 2016. That’s when house’s current creative director Alessandro Michele unveiled them as a sleeker alternative to the instantly recognizable 1953 version of the shoe. (You can still get a pair of those classics for $690.)

The Swedish brand attributes this nightmare-inducing price bump to high demand, the quality of the mattresses’ all-natural materials—horsehair and cotton among them—and the additional hours required to make the latest version of the bed. Four different artisans spend a total of 320 hours crafting each bed by hand; when the Vividus launched 11 years ago, it was only 160. Rest assured: You’ll be able to easily drift off to sleep simply by counting all those hours (or dollars) instead of sheep.

According to Mary Louise Starkey—who claims to have coined the phrase “household manager” and whose Denver-based company, Starkey International, has been training and placing domestic staff for nearly 40 years—there’s been no recent change in this salary range. Similarly, there’s been no change in her fees: She charges $15,000 to create a fully customized household management plan and $2,500 a day for onsite training of staff, all based on her patented Service Management System, which was beta tested by the house staffs of high-ranking officers in the U.S. military.

After a year-and-a-half reboot and renovation, this Chicago gourmet hot spot—currently the Windy City’s only Michelin three star—reopened in 2016 featuring this new top-end tasting menu. The restaurant serves it exclusively to private parties of six, seating them in a glass-enclosed room within the working kitchen. The menu debuted at $385 and has gone up only $5 to $10 (that’s 1.3 percent to 2.6 percent) since then. “Food away from home,” the (vaguely) comparable category in the national CPI, in contrast, has gone up by 2.8 percent in the last 12 months alone.

The Penthouse Suite at the Four Seasons George V

There’s been no change to the nightly room rate in the Eiffel Tower–view top suite of this storied Paris stay, which is more than can be said for the national CPI category that includes hotels, which has gone up by .5 percent in the last year. And, more good news: Because the hotel pegs its rate to the Euro, there’s actually been a price drop for those of us paying in U.S. dollars. This time last year, a night would have cost you about $27,500. Now, it’s a cool $25,500.

The major increase here, Debragga says, comes directly from the company’s exclusive supplier of Japanese Wagyu, which hails from a tiny region in the Japanese prefecture of Miyazaki. Debragga—a Robb Report-approved butcher that supplies meat to top restaurants in New York City and elsewhere—increased rates accordingly on its Wagyu cuts, which are some of its best sellers. The stuff is certainly not for the faint of heart—and not just because of the fat-marbled meat’s potential effect on one’s coronary circulation.

Recently deemed one of Robb Report’s 20 best whiskey’s you can buy right now, this Macallan bottling has remained impressively consistent in price for the last several years—though you may find fluctuations at your local dram shop. Nationally, the price of whiskey overall has dropped by .3 percent in the last year, making the flat cost on the Macallan seem like a particularly small price to pay to drink the good stuff.

Among the cultiest of cult California cabs, this Napa red has gone up $50 a year for the last several year for folks lucky enough to be on Harlan’s mailing list and buy directly from the winery. The mailing with release pricing for the 2016 vintage — available in 2020 —went out this past August, while the 2015 vintage—available later this year—went out in August the year before. (Average retail pricing for these bottles on liquor store shelves, when they make it to liquor store shelves, is more like $1,300.) The 6.25% uptick compares with an increase of just 1.1% in the national CPI’s “wine at home” category

The initiation fees stayed the same for this vacation-villa, members-only club co-founded by former AOL chief Steve Case: $125,00 for 10 years, $250,000 for 30. The annual costs, however—which members pay towards days used at the club’s homes and estates around the world—did see a jump. At 2.7 percent, thought, it’s right in line with the national CPI’s 2.8 percent increase for hotels, motels and other lodging away from home. Still, it’s not really a tough call between the Dayton Motel 6 and a five-bedroom St. Barth’s villa with a private infinity pool.