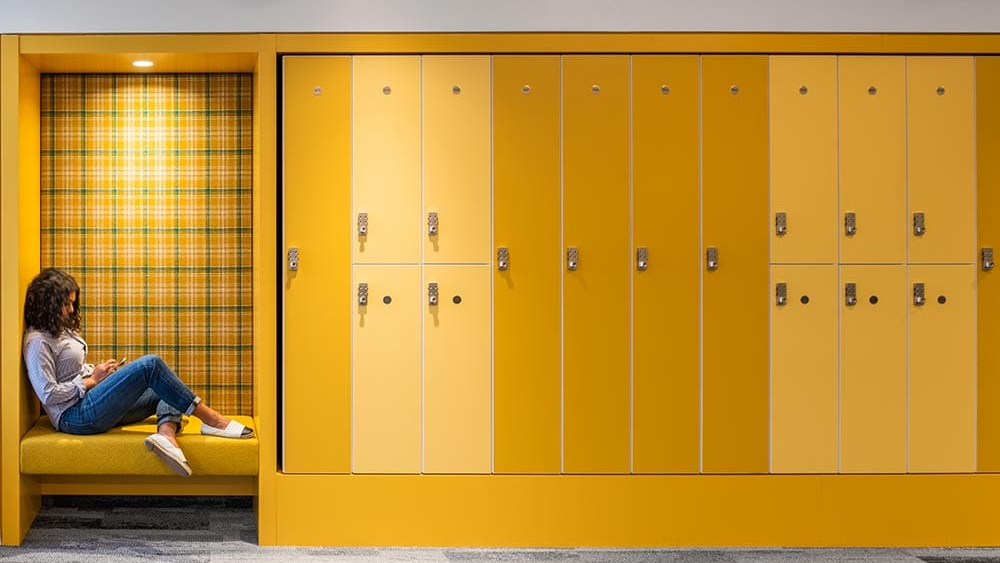 Who says storage isn’t sexy? Not Apple or Google, apparently.

To lure top talent, some of the world’s most high-profile companies—the two tech behemoths included—are turning to a new kind of amenity: luxury lockers. According to Fast Company, Fortune 500 companies are channeling their inner Mary Kondo and investing big dollars so that employees can have a really nice place to put their stuff.

Of course, these are not the rusty metal lockers from your from high school—or even the blonde wood ones from your Equinox. It’s no longer enough for lockers to just be functional. Instead, these spaces promise spa-like ambiance, sleek design and an array of high-tech touches. In addition to high-quality cabinetry, they come packed with modern features like video monitors, device charging stations (of course) and motorized shelves.

So, where do these luxury lockers come from?

Leading the way in high-end locker making is a company named Hollman Inc., which controls a massive 70 percent of the “non-metal” sector of a $1 billion locker market.  Over the last two decades, the Texas-based company has lured Apple, Nike, Google, Goldman Sachs and a number of elite athletic organizations, like the Chicago Cubs, with chic solutions to their varied storage needs. While the company offers some mix-and-match pre-fab options, it views itself as more of an interior design firm specializing in bespoke locker facilities that fit the personality of its clients.

Hollman likes to think of itself as the Apple of the industry. If that sounds over-ambitious for a company that makes small storage units, it isn’t all that far-fetched: Before his death in 2011, Steve Jobs made clear that he wanted Hollman to design storage for the tech giant’s “spaceship” headquarters in Cupertino. In true Jobsian fashion, Apple was a wee bit exacting about the lockers it commissioned. “They wanted to have a meeting about the lockers every week,” company CEO Tim Hollman told Fast Company. “That went on for two and a half years.”

The iPhone-maker eventually settled on a series of minimalist, custom “Apple white” lockers, with text and numbers in the same typeface used on the iPhone, no visible screws or holes and, perhaps most surprising of all considering the client, no device charging capabilities.

While the CEO credits the boom in luxury lockers to Tiger Woods’s impact on golf in the 1990s—suddenly every single country club was forced to up its game—he said a move by companies to use space more efficiently is what drives the business now. With companies trying to maximize how many employees it can fit on a floor, the space dedicated to something like storage has to be special—for the company and its employees. The CEO cited JP Morgan’s Delaware offices as an example: “There is no space for your personal belongings. There’s nothing there for you. It’s just this desk. So how we look at it is, a locker is the only space you have now in most of these places that’s your own—so we need to give you something that is extraordinary.”

As for the future of luxury lockers, Hollman believes that, as with everything else, their biggest benefit might come down to data. As companies gather information about how employees actually use their lockers, they will know more about to improve the employee experience.

“I think in the future, [our business] might not have anything to do with the lockers,” he told the publication. “It’s going to have to do with the data you can get out of them.”