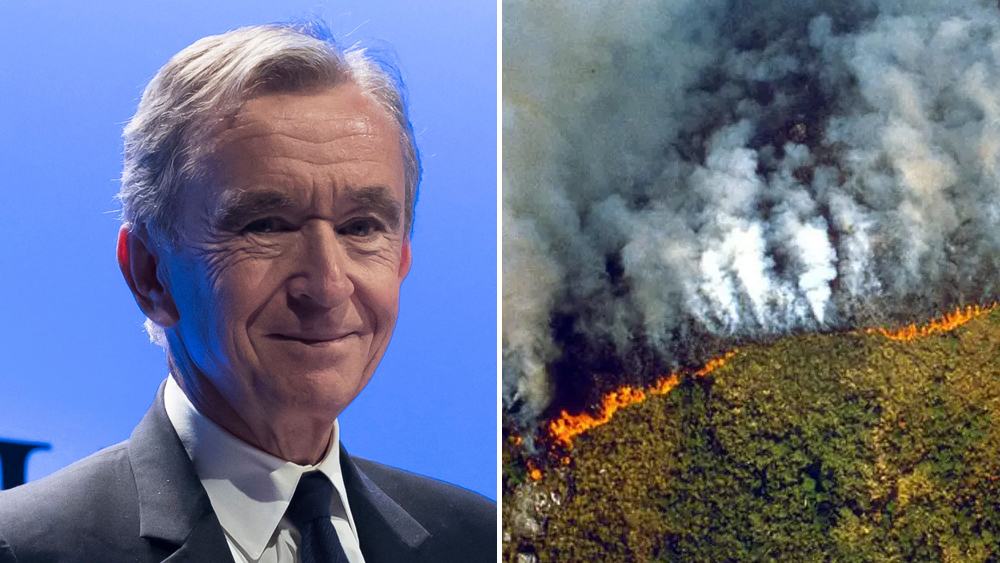 The lungs of our planet are on fire. Blazes in Brazil’s Amazon rainforest have hit a record number this year, with nearly 73,000 fires recorded between January and August. Fortunately, donations are flowing in from across the globe, the latest of which has come from LVMH chairman and CEO Bernard Arnault.

The French businessman, who became the second-richest person in the world last month and boasts a net worth of $108 billion, announced on Monday the luxury group would join the G7’s initiative to protect the Amazon and pledge a whopping €10 million (roughly $11 million) to help fight the fires currently ravaging the precious rainforest. Earlier this year, LVMH also committed €200 million (approximately $226 million) to the reconstruction of Notre Dame.

According to Forbes, the LVMH group cited France’s “honor” of sharing responsibility for this immense rainforest, which is being destroyed at a rate of one soccer pitch every minute.

LVMH provides aid to help fight the wildfires in the Amazon. Bernard Arnault, Chairman and Chief Executive Officer of LVMH, and Yann Arthus-Bertrand, Member of the LVMH Board of Directors, have announced that LVMH will join President Macron and the G7 initiative contributing 10 million euros to help fight the wildfires that are ravaging the Amazon. They call on all those who share their belief that the Amazon, a world heritage treasure, must be protected, to join this initiative that must become a collective effort. 📷Yann Arthus-Bertrand _ #LVMH #Amazon #YannArthusBertrand

Yann Arthus-Bertrand, a board member at LVMH, said: “Protecting the environment is not just about words and speeches or signing declarations of principle, it also requires taking concrete collective actions when dangers arise in order to provide resources for local specialists and work together to save our planet.”

Arnault follows in the footsteps of actor and eco-warrior Leonardo DiCaprio, who committed $5 million toward the preservation of the Amazon via his non-profit Earth Alliance. “The fund was set up to help local partners and the indigenous communities on the front lines protecting the Amazon,” DiCaprio said.

Yesterday, we launched the Amazon Forest Fund, the first initiative from the newly formed @EarthAlliance. The fund was set up to help local partners and the indigenous communities on the front lines protecting the Amazon. Please follow @EarthAlliance to stay up to date with the action taking place and for further ways that you can help support. You can get involved and donate right now at ealliance.org/amazonfund (#linkinbio) Photo: @chamiltonjames, 2017

However, on Tuesday, Brazilian President Jair Bolsonaro said he would not accept the aid package pledged by the G7—which totals more than $22 million—until he receives an apology from French President Emmanuel Macron. The feud began after the French leader said the fires are a world environmental crisis that Bolsonaro has allowed to worsen, adding that the Brazilian leader had also lied about his commitment to fighting climate change. According to the New York Times, Bolsonaro then issued his possible terms for the acceptance of the aid package when he spoke to reporters in the capital, Brasília. He said that if Macron withdrew “insults made to my person,” and what Mr. Bolsonaro interpreted as insinuations that Brazil does not have sovereignty over the Amazon, he would reconsider.

If you’d like to donate, Charity Navigator has a list of highly-rated charities working on recovery in the rainforest.