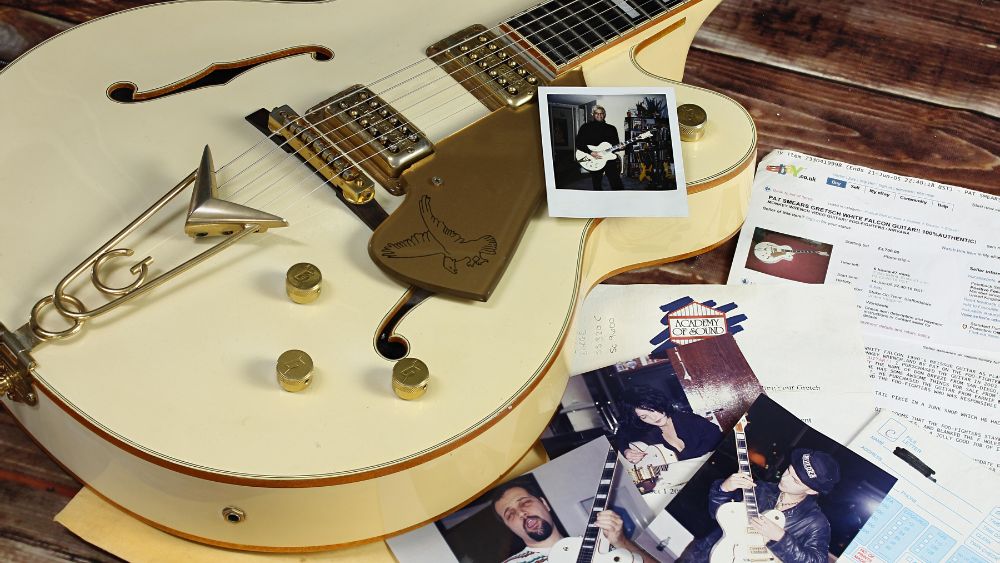 The guitar that Dave Grohl played while shooting Monkey Wrench will soon be up for grabs.

Next month, Gardiner Houlgate will be selling the Foo Fighters’ 1990 Gretsch White Falcon during a UK-based specialist guitar auction, reported NME. The instrument was formerly owned by bandmate Pat Smear and used during the recording of their second studio album, The Colour and the Shape. Included in the sale are a number of ‘90s polaroids, including a photo of actress Drew Barrymore strumming the ax. Altogether, it’s expected to fetch over £30,000 ($35,301).

According to Smear’s guitar tech, Earnie Bailey, he made several modifications to the original guitar throughout the years. “The Gretsch White Falcon was purchased in 1996 by Pat somewhere in Los Angeles. Soon after, I replaced the Bigsby tremolo system with a gold Gretsch Cadillac style tailpiece at Pat’s request as it provided better tuning stability,” Bailey tells the auction house.

“On tour, we stuffed the guitar with pillow material to keep it from feeding back onstage. From there I further modified the guitar by removing the switch on the instrument’s upper bout, which we may have at one time added a large red plastic jewel to plug the hole where the switch was previously.” It also comes with its original hard case that has white tape inscribed with the words “stays on the bus” and “Falcon.”

The White Falcon made its debut in 1997 when the video for the rock band’s lead single off their biggest-selling album was released. In the video, which Grohl directed himself, the frontman can be seen behind the mic with the Falcon in hand. This was also the first time that late drummer, Taylor Hawkins, made an appearance. The sticksman passed away at the age of 50 while on tour back in March.

The Gretsch White Falcon will be auctioned off on September 7 at Gardiner Houlgat in Corsham, Wiltshire.