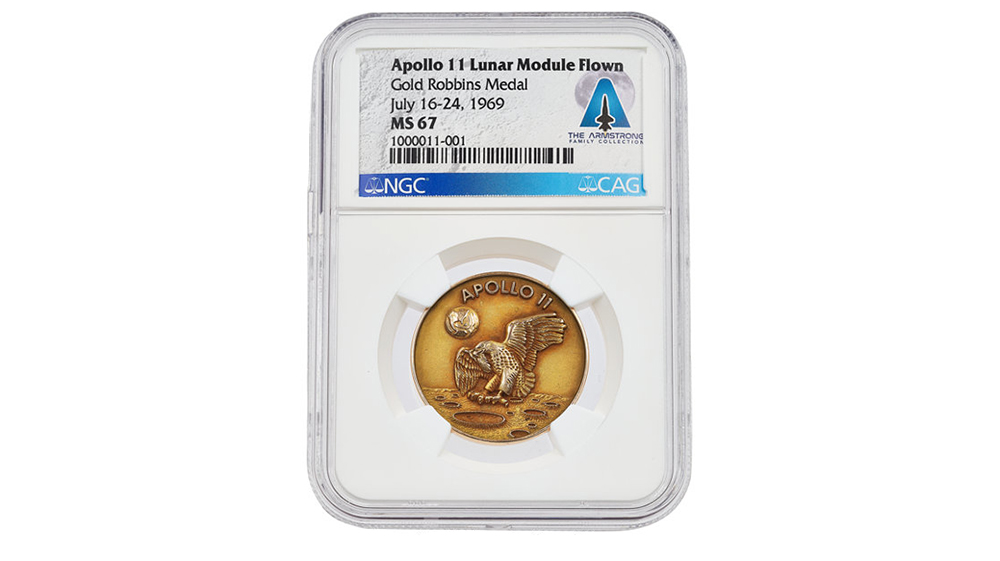 The art world travelled to infinity and beyond this week as Heritage Auctions continued its three-day sale of the Armstrong Family collection Space Exploration Signature Auction, which dovetails with the 50th anniversary of Neil Armstrong’s Apollo 11 moon landing on July 20.

The sale began Tuesday in Dallas and has netted over $2.4 million so far, largely through the sale of Neil Armstrong’s gold medal, which flew with him to the moon. The 14-carat gold piece sold for $2.05 million.

Aside from that giant leap, other smaller steps from the auction have included an American flag that flew aboard Apollo 11, which sold for $137,500, Armstrong’s personal copy of NASA’s “Preliminary Apollo 11 Flight Plan,” which went for $112,500, and his own NASA flight suit in the agency’s trademark dusty blue, which sold for $81,250.

Additionally, Armstrong’s 2004 National Award for Space Achievement trophy sold today for $5,500, and his personal copy of the July 25, 1969 issue of Life magazine, which sees him exiting the craft after returning back to Earth, sold for $21,250.

Other space-adjacent pieces from Armstrong’s collection of travel ephemera included a propellor from the Wright Brothers’ first powered flying machine from 1903, which netted $150,000, and a piece of muslin clothe from its left wing, which went for $143,700.

Though this is the last day of action at Heritage, its not too late to get in on the space race. Saturday, Sotheby’s will auction off 11 items from the personal collection of Buzz Aldrin, alongside other Space Exploration–themed wares. The top lot from Aldrin’s collection includes the “Mission Rules Summary” from the Flown Apollo 11 Data File, which is estimated to sell between $30,000 to $50,000, and the pièce de résistance is three reels of tape from NASA, containing two-and-a-half hours worth of footage which offer the “earliest, sharpest, and most accurate” images of man’s first steps on the moon, estimated to sell for between $1 million and $2 million.

For the budget-minded space fan, several exhibitions have popped up around the country to commemorate the anniversary. In New York, the American Museum of Natural History is opening To the Moon, a VR collaboration between Laurie Anderson and Hsin-Chien Huang that blends sci-fi films with Greek mythology to create an abstract version of landing on the moon. Also, the Metropolitan Museum of Art is hosting Apollo’s Muse: The Moon In The Age of Photography, which exhibits a selection of drawings, prints, photography, and painting of the moon and space exploration.

Outside the U.S., the Louisiana Museum of Modern Art in Humlebæk, Denmark hosted a large-scale exhibition The Moon: From Inner Worlds to Outer Space earlier this year that featured 200 works of art exploring the mysterious power of the moon, ranging from Galileo’s moon map to Hiroshi Sugimoto’s photography.

In addition to the sales, openings, and celebrations of the anniversary of the landmark event, check out this clip from The Art and Times of Frosty Myers, on the making of the Moon Museum, which brought pin-sized pieces by Andy Warhol, Claes Oldenburg, Forrest “Frosty ” Myers, John Chamberlain, Robert Rauschenberg, and Dave Navros to the moon, becoming the first art object to visit the lunar surface.