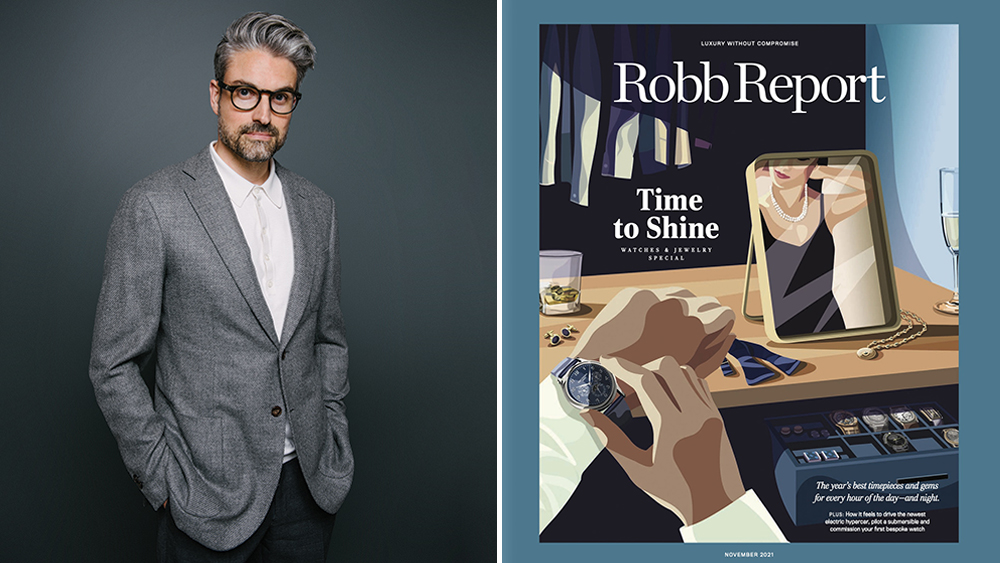 Collecting is an integral part of Robb Report’s DNA—and that of its readers. I’m often struck by your knowledge of, and admiration for, the craft inherent in the remarkable objects that so beguile you.

That might explain why, for many of you, there’s quite often a grail (or two) you’re in the process of hunting down at any particular time. So for our annual watch and jewelry issue, it seemed only fitting to feature one of the most respected collectors in the world—and since collectors are nothing without dealers, we included some of the best in that field, too.

If you have a passion for watches, the only reason the name Auro Montanari might be unfamiliar to you is because you know him better as his alias, John Goldberger. He was the owner of “The Unicorn” Rolex, Ref. 6265, that sold for $5.9 million three years ago and is a prodigious collector of not just exceptional watches but also books, china and photography. He’s the subject of The Answers and shares some of his back story, as well as what’s currently distracting him.

In our portfolio of several of the watch world’s most influential dealers, we meet the men who, among them, could soothe whatever horological ache you might be nursing. If Rolex is your poison, Eric Ku or Tariq Malik can be called upon to ease your fever. Prefer to patronize one of the independents or crave something unusual from a lesser-known brand? Silas Walton, Sean Song and Eric Wind are the guys to consult. All posed for Robb Report wherever they happened to be in the world but are united by an ability to understand what watch nerds like us want and need… because they’re watch nerds, too, of course.

Bespoke watchmaking is an art, and I’m excited to publish entrepreneur and collector Mark Cho’s account of his first foray into commissioning a timepiece. No stranger to the finest artisans around the globe—Cho is the cofounder of men’s clothier the Armoury as well as co-owner of Drake’s haberdashery—he embarked upon his adventure after encountering a stunning Christian Klings timepiece in an auction preview back in 2018. Klings is a one-man b(r)and, making everything by himself by hand, so the process was a long one: Cho took possession of his exceptional one-of-one just two weeks before this issue went to press.

Time was when you’d wear a dress watch with a suit and perhaps a sports watch on a bracelet at the weekend. That way of thinking seems as antique to me now as a yellow-gold 1950s Calatrava (though nowhere near as cool), but recently a friend said he’d only ever think of pairing his Cartier Tank with a tuxedo. Seriously?

I shall be directing him to our watch shoot in this issue, which illustrates how different timepieces can fit into the Robb reader’s average week. The new Tank Louis Cartier with its Art Deco styling would be a fine match for the full black-tie rig, but it looks as good worn with sportswear on the way to the gym. Likewise the skeletonized rose-gold Breguet with guilloche dial might seem a natural to pair with a suit, but we prove it works just as elegantly juxtaposed with a punchy cashmere knit in your downtime.

Continuing the collecting theme, Tanya Dukes clues us in to the rising popularity of ’70s jewelry. The decade spawned some truly fantastic pieces, and there are plenty of statement items to be sourced—if you know where to look and whom to speak to. Meanwhile we showcase stand-out jewelry of a contemporary stripe in our striking shoot, plus don’t miss the extraordinary micromosaics of Maurizio Fioravanti in Genius at Work. And there are cars, jets, submersibles, sakes, hotels and, if you can find it, one famous plastic crown that should amuse you, too.