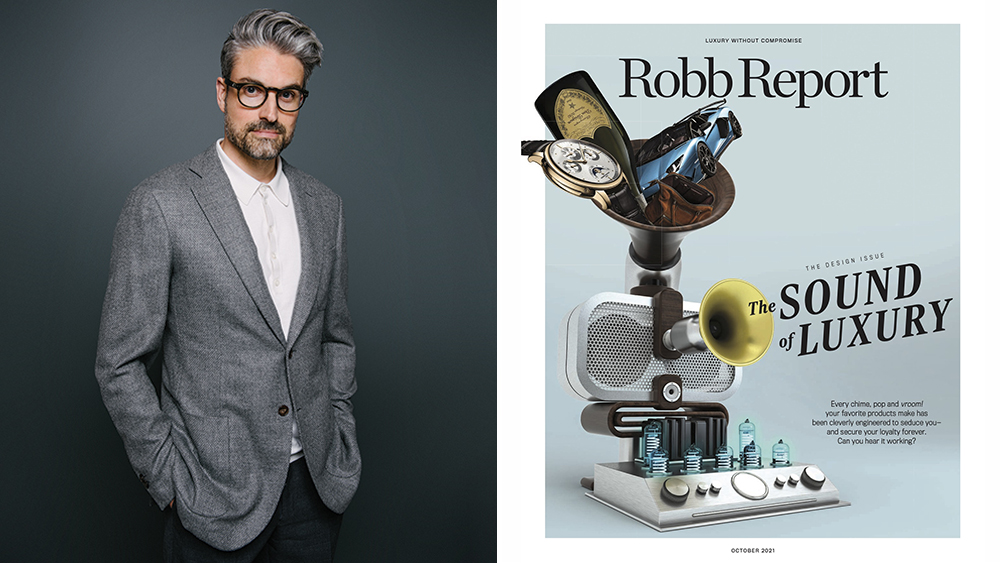 Here’s a question I bet you’ve never been asked before: What does your favorite shirt sound like? Yes, “sound,” rather than “look” or “feel.” I suspect it barely registers, but I wonder if that will be the case for long—because sound is the latest battlefield upon which the fight for you, the seasoned luxury consumer, is taking place.

Of all the senses we use to fully absorb the products and brands we consume, sound is probably the last you’d recognize as having an impact on how you’re evaluating an experience (with the exception of the soundtrack that accompanies your day via those fancy speakers and headphones of yours). But these subconscious auditory links are still being made whether you know it or not, and for retailers and manufacturers alike they’re vital because “emotional connections are deeper and harder to break than logical ones,” as Lucy Alexander, Robb Report’s senior staff writer, explains in her fascinating exploration into the sound of luxury.

As well as audio equipment, you may have rightly identified the auto industry as another sector where sound is paramount to the experience—so much so that it plays a significant role in everything from purchase decisions to your visceral sensation of enjoyment out on the road. But even the roar of that V-12 engine isn’t immune to the guys in the white coats, who have been tweaking and fine-tuning all aspects of the symphony played by the internal-combustion engine and, latterly, its electric successor, for years.

“When you are in a super-sports car, the sound becomes part of your emotions,” says Maurizio Reggiani, Lamborghini’s chief technical officer. At the other end of the acoustic spectrum, the sense of serenity felt when inside a Rolls-Royce or Bentley is equally manufactured, silence being as much, if not more, a signifier of luxury as any other. It’s further evidence of how nothing is left to chance by those who steer the design of the world’s finest brands.

Speaking of design, which this issue focuses on, we eschewed the more common tropes of that genre in favor of some that I hope you find intriguing, perhaps even a little surprising. Take, for instance, the stealth rise of Côteaux Champenois. These are the still wines produced in the Champagne region that, despite having been in production long before their bubbly brethren emerged in the mid-1600s, remain practically unknown outside France. Devilishly difficult to procure in the US, they are increasingly worth tasting. To paraphrase one of the experts we consulted about these bottles, if the Champagne region is a diamond for oenophiles, these wines are like a whole new cut.

Elsewhere we explore an unusual former bachelor pad in Texas that gives similar prominence to the owner’s car collection as to the living areas, and we ask some of our favorite designers of color to highlight those within the BIPOC design community they feel have been overlooked. And then there’s Mate Rimac. The 33-year-old Croatian has achieved more during this year than many fit into an entire career. He recently became the CEO of Bugatti, taking the reins of arguably the world’s most prestigious marque in a joint venture between Porsche, which had control of Bugatti from within the vast Volkswagen Group, and his own eponymous electric hypercar maker, Rimac. While the latter launched 12 years ago, before the start of 2021 it had yet to release a vehicle. That was because it had instead built a multibillion-dollar business as the designer, manufacturer and supplier of the high-performance electric-propulsion technology you’ll find in Ferraris, Aston Martins, Mercedeses and Koenigseggs. Oh, and in August his first set of wheels, the Rimac Nevera, smashed the world production-car acceleration record previously held by… a Bugatti Chiron.

Right now he’s one of the most exciting entrepreneurs, business brains and designers on the planet. Writer Ben Oliver spent several months speaking to Rimac as all this unfolded in an exclusive profile.

Plus, discover Vacheron Constantin’s new sports watch; why preppy style is coming back around (again!); and the iconic furniture that three top designers can’t do without. Enjoy the issue.