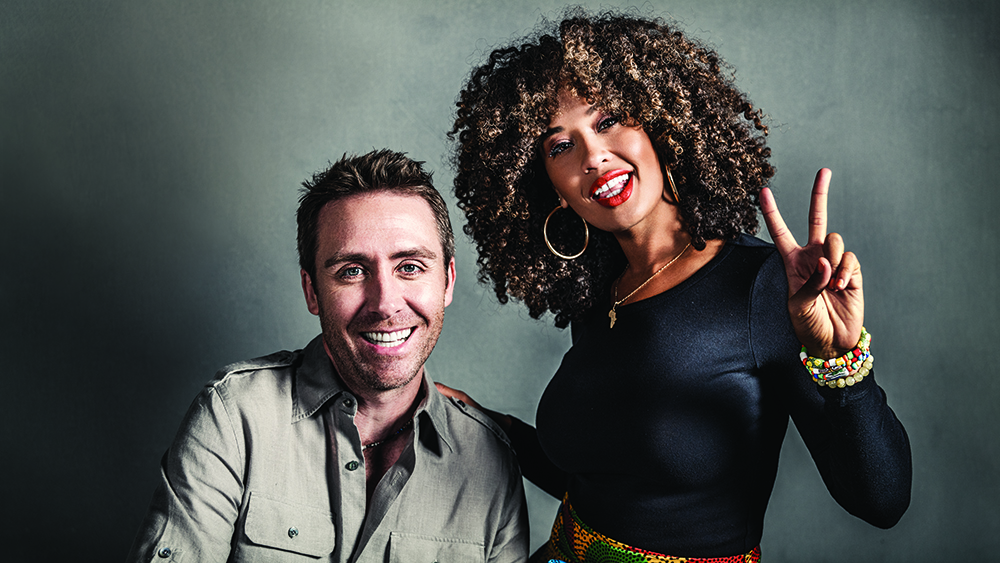 Philippe Cousteau is an explorer and conservationist and the grandson of pioneering diver Jacques. He juggles running EarthEcho International, a nonprofit geared toward spurring young people to work on sustainability, with a thriving TV career, hosting shows such as Caribbean Pirate Treasure on the Travel Channel. ¶ Miami native Danni Washington cofounded her first nonprofit at the age of 21, aiming to inspire other young people in marine conservation. Since then, she has gone on to host educational videos and TV shows on STEM topics as well as campaign extensively for cleaner, plastic-free oceans. ¶ They first met in 2009 at an event at the Museum of Discovery & Science in Fort Lauderdale, Fla.

“Her skills as a storyteller and how deeply passionate she is about the ocean are things we share, alongside a desire to inspire young people. That’s how we connected. Working with kids is where she got her start, and that was my first work as well, with my charity, EarthEcho, which focuses on young people and education.

“These days, especially in the media, things can feel contrived, with people doing something just to be famous or be on TV. Danni’s motivation is just like mine. She sees it as a means to an end rather than an end in and of itself. Being social, appearing on TV—they’re all just tools.

“The environmental movement has done a poor job of speaking to a broad audience of people. It tends to speak to the converted, and one of the big challenges is: How do we broaden that audience of people who care about, and relate to, those issues? One of the earliest times I met Danni, she was with all these different elementary-school kids who had come to the [Marjorie Stoneman Douglas Biscayne Nature] center to experience the ocean for the first time. A lot of these kids lived, maybe, a mile from the ocean but had never visited it. Seeing her take them out and wade into the water to see the seagrass or pull up animals was wonderful. She has a passion for storytelling, and she’s so genuine about that. It’s reflected in all the work she does.

“Just look at her Instagram and you’ll see. She’s willing to let it out a bit more. I always struggle with the challenge of trying to balance being earnest with being fun. She strikes a better balance than I do.

“Actually, she’s less ‘the next me’ than a peer, someone I respect incredibly. More than anything, we learn from each other.”