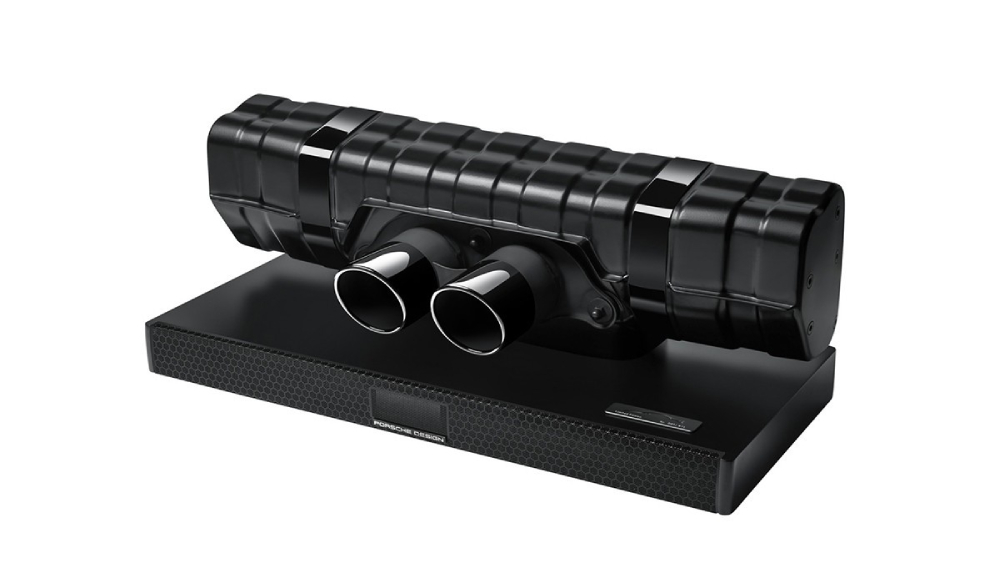 What if your new audio system offered the same kind of performance as one of the auto industry’s most legendary sports cars? Thanks to Porsche Design’s latest tech release, we finally have the answer.

Inspired by the 911 GT3, the company took the rear silencer and tailpipe cover––both finished by hand––and used them as a subwoofer Helmholtz resonator extension to create a soundbar like no other. Though a silver-toned stainless-steel version was released prior, this new limited-edition iteration is rendered entirely in shades of black.

Just like Porsche cars, the soundbar is produced in the marque’s workshops in Germany. It emits 2.1 virtual surround sound through a 200-watt power system. In a nod to the model it’s based on, only 911 of this noir version will ever be produced, and each one will come fixed with a plaque featuring a unique, sequential serial number to identify it as such.

A close look at the honeycomb output design and sleek remote.

As far as the sound itself and extra capabilities, the specs are just as impressive as its visual aesthetics. Built with wireless, loss-free audio via aptX® technology, its Bluetooth® interface makes for easy pairing with a range of devices. The volume, bass and treble controls can be operated from the slender remote to adjust your listening experience even when not in especially close proximity to the device. But if you happen to be, all of the levels can be easily read via the built-in LCD screen across the front. Through engineering finesse, the matte and glossy elements of the body and tailpipe components are welded together before having every trace of seaming polished away.

Retailing for $4,250, the price tag for the Porsche soundbar is about $750 more than the standard version, but we have a feeling that won’t stop audiophiles and car enthusiasts alike from snapping it up.