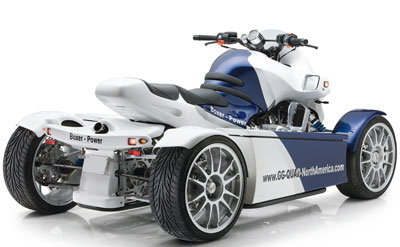 Renaissance artists frequently were called upon to conjure up images of creatures that they had never observed. Albrecht Dürer’s imaginative Rhinoceros and other animalistic interpretations from the era invariably are amalgams of anatomical bits ranging from fish to fowl, friendly to ferocious. They never, however, fail to entertain.

As mechanical creations go, the GG Quad—a four-wheeled motorcycle that should become available in the United States in late 2007 and have a starting price of about $50,000—is just such a fusion of disparate but complementary components. GG Motorradtechnik, a manufacturer with two decades of experience designing specialty motorcycles and other vehicles, most employing BMW drivetrains, engineers and builds the four-wheeler at its facility outside of Lucerne, Switzerland. The company’s unique interpretation introduces a level of performance and sophistication previously unknown in the down-market world of off-road quads.

The powerplant of the GG Quad immediately distinguishes the vehicle from other four-wheelers. The 1,150 cc, 95 hp flat-twin BMW unit uses Motronic engine control, and the accompanying transmission has six forward gears and one reverse. With a power-to-weight ratio close to that of a Corvette, the 880-pound Quad scoots to 60 mph in less than five seconds and reaches a top speed of 115 mph.

The Quad’s control layout—brakes, throttle, and clutch—is fundamentally that of a motorcycle, and the driver sits comfortably upright while leaning slightly into the bars. Feet are flat on foot pegs, and the seat is ample but sporting. Passenger comfort is of paramount concern, although one cannot help but fantasize about a solo ride on a Sunday morning. On such a ride, the Quad’s formula-car stability and motorcycle agility help ensure that all four wheels remain on the road, even when cornering at high speeds. The Quad also brakes with alacrity, thanks to four-piston calipers and full-floating rotors at each corner.

In typical Swiss fashion, the Quad’s fit and finish is more akin to that of a fine mechanical watch than to a standard motorcycle’s. Components—primarily CNC-machined aircraft-aluminum pieces made in-house—promise to impress the most fastidious race bike fabricator. The billet aluminum chassis, suspension arms, shocks, brakes, hubs, and wheels (16-inch front, 17-inch rear) are works of art.

The hand-laid fiberglass bodywork is available in any color, with optional paint and logo treatments. Several other options—including a Quaife limited-slip differential, 80-liter storage panniers, and a navigation system—are available to individualize this already unique creation.