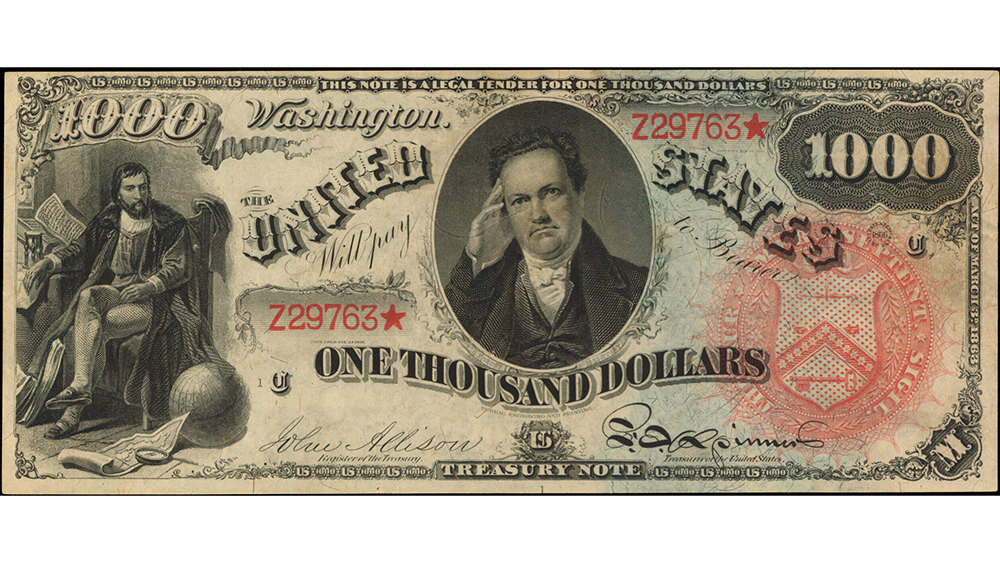 Call it a case of old money, new values. A $1000 Marcy Silver Certificate dating back to 1891 is currently being auction off by Stacks Bowers in Baltimore, Maryland with a current top bid of $1.2 million. That’s one hell of an ROI—who knew you could make a mint off an old bank bill? The note is part of an extensive collection of rare American collector, Joel R. Anderson, an Alabama native and a former chairman and director of the Anderson Companies publishing conglomerate, which operates Books-A-Million, Whitman Publishing and Anderson Press. The company also owns TNT Fireworks, the country’s largest importer and distributor of pyrotechnics.

Anderson’s collection is creating some sparks of its own. Auctioned off in a series of four sales, the first three lot collections raked in $26,184,240. By the time the fourth collection sells tonight, it has been up for bidding online until tonight at 6 P.M. when a final live auction will secure the top bids, it will be the most valuable collection of large size paper money ever sold at auction. The 54 lots being sold today have an original face value of $16,931, but just three bills alone from those lots have already received bids that total a whopping $3 million.

In addition to the Marcy Silver Certificate bill mentioned above, the other top two lots are an 1869 $500 “Rainbow” legal tender note with a portrait of John Quincy Adams that has a current bid of $900,000 and an 1869 $1000 “Rainbow” legal tender note that also has a top bid of $900,000. The latter has an unusual portrait of DeWitt Clinton, an American politician and naturalist who serves as a United States senator, Mayor of New York City, and the sixth governor of New York. The trippy looking bill presents Clinton with his head in his hand and to the left is a portrait of Christopher Columbus seated at his desk with a globe at his feet. This particular series of bills was issued only from October 19, 1869 through July 25, 1874—74,400 examples of the $1000 note were printed. Incredibly, this bill was last sold publicly at a 1946 Barney Bluestone auction, where it sold for $1,200. Since then it was sold privately over the years to various collectors, ultimately landing in the hands of Anderson in 2011.

But the collection isn’t only about big bills—a $1 bill, an 1869 “Rainbow” Ace, has a current bid of $9,500 and a $2 note from 1869 is currently going for $16,000. Who knows how much these will be worth in decades to come, but if you want to try your fortune on one you better get in on the live bidding today. You’ve got to spend money to make money as they said, and in this case, you’ve got to buy money to make money.