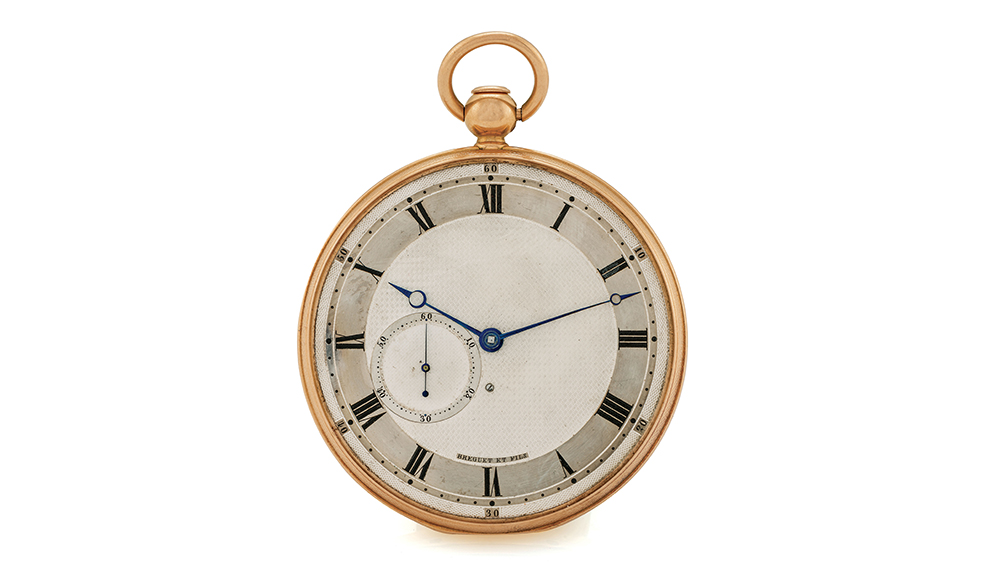 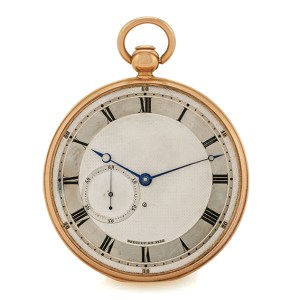 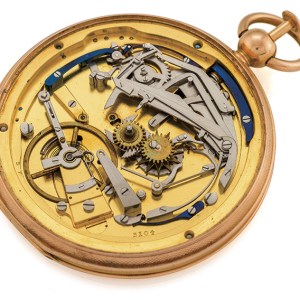 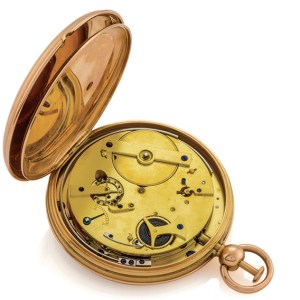 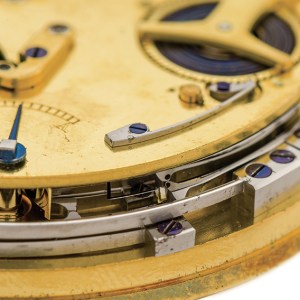 The Breguet Museum and its President and CEO, Marc A. Hayek, acquired two exceptional antique watches and some letters of great historical value at three auctions held in November and December in Geneva and Paris. One of these objects, the recently discovered Breguet N°3104, is testament to the genius of A.-L. Breguet, to whom we owe the invention of the gong-spring for repeater watches in 1783.

The Breguet N°3104 pocket watch, bought from Antiquorum in November, recently resurfaced after over 140 years in the possession of an illustrious European family. Initially sold in 1818 to His Royal Highness the Infante Francisco de Paula of Spain, Count of Moratalla, this piece is one of the rare and highly prestigious minute repeaters made by A.-L. Breguet, whose chiming watches generally sounded the quarter or half-quarter hours. Besides the minute repeater function, this 62.5 mm wide pocket watch in 18-carat gold features a jumping hours hand. Its case is adorned with ‘barley grain’ guillochage by Pierre-Benjamin Tavernier. The guilloché silver dial, also by Tavernier, has a distinctive two-part composition, with the small seconds ring at 8 o’clock integrated into the dial and fixed with two tiny blued-steel screws. The markers indicating the fractions of 10 minutes surrounding the hour circle are another unusual characteristic. Adorned with the Breguet secret signature on both sides of the number 12, the dial is enhanced by ‘open-tipped’ hands in blued steel, commonly known as Breguet hands, invented by the watchmaker in the same year that he introduced the gong-spring. As for the movement, this exceptional piece houses a 22’’ calibre with visible inverted cylinder escapement. The repeater spring operates on two gongs struck by two hammers activated by a piston situated in the pendant of the watch.

The Bourbon family of Spain were among the clients of the House of Breguet from the earliest years of the 19th century – King Charles IV and Queen Marie-Christine purchased many Breguet timepieces, as did their children after them. The future Ferdinand VII and his brother the Infante Francisco de Paula owned some prestigious Breguet pieces. Other members of the family purchased Breguet watches and clocks during their period of exile in France between 1808 and 1814. The Infante Francisco de Paula, owner of the Breguet N°3104, left a long line of descendants: he is in fact the direct ancestor of the current King of Spain.

The second piece acquired by Breguet is the N°4720, recently ceded to the House by the auctioneers Fraysse. It is a very fine tact watch with a regulating dial, sold to Casimir Périer in 1841. This timepiece is adorned with a yellow gold, hand-guilloché hunter case, along with a double chain and key. Its satin-brushed silver dial features two counters – for the hours and 30 seconds – as well as a central minute hand. The watch is adjusted around the edge of the 30-second counter. The external hand, characteristic of tact watches, here takes on a serpentine form.

First marketed in 1799, tact watches were invented by Breguet to enable the time to be read by touch. An arrow on the outside of the case reproduces the position of the hours hand, while twelve protruding studs around the case represent the hour markers. Sometimes referred to as ‘watches for the blind’, tact watches allow the wearer to tell the time by touch alone. The traditional dial also enables the time to be read in a more conventional manner.

The third Breguet acquisition is a collection of ten historic letters regarding the House’s business in Russia from 1808 to 1810. Beyond his gift for watchmaking, A.-L. Breguet was also an extraordinary entrepreneur, who very quickly developed a large-scale commercial network for his timepieces. From his very beginnings in business, he cultivated a long and fruitful relationship with the Russian Empire as part of his export policy. While he was already acquainted with certain Russian personalities before 1790, it was from 1801 onwards that his first major sales were concluded. In the spring of 1808, after careful reflection and following the very positive reactions he received from his Russian clients, Breguet decided to conduct an original experiment in Saint Petersburg – the opening of a branch managed by a man salaried by and working exclusively for the House. A.-L. Breguet found a fitting candidate in Lazare Moreau, nicknamed Zarenne, a bold young salesman whose talents he had come to appreciate during a difficult business trip to Prussia.

The letters now enhancing the collection in the Breguet Museum, bought on 2nd December at the auctioneers Aguttes, were sent to Moreau by Breguet senior and junior. Brought to auction by Moreau’s descendants, they provide fascinating insights into the business activities of Breguet during its founder’s lifetime.

The House is delighted to include these new objects in its large collection of antique watches and manuscripts. It invites all enthusiasts of history, culture and prestige watchmaking to discover its fabulous heritage, now on display at its museums in Paris, Zurich and Shanghai.