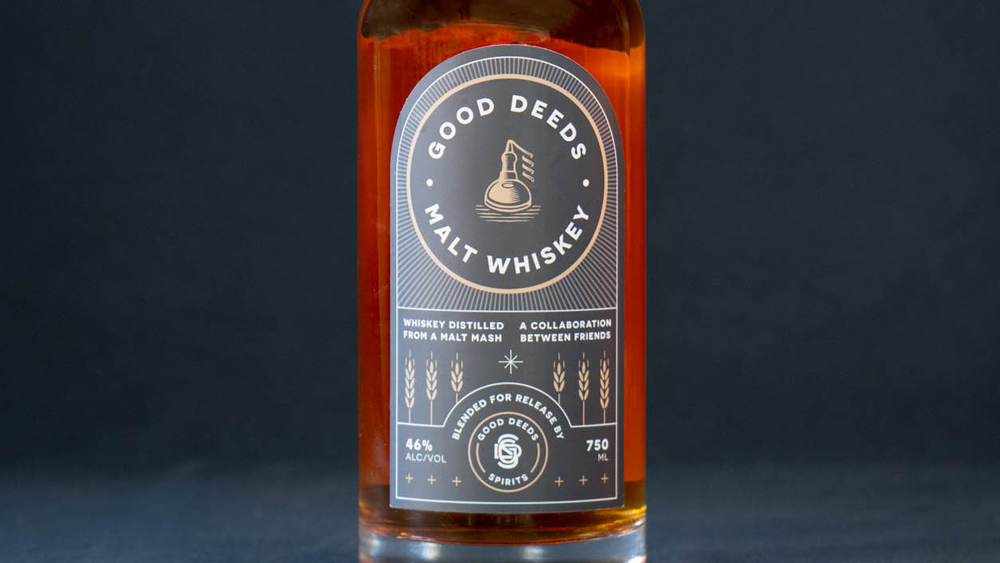 American single malts have gained traction in recent years, with a majority of them made in the US coming from the craft distillery community. While production methods vary slightly the whiskey is always made from 100 percent malted barley and aged in oak barrels, both new and used. In addition to promoting their own products, some distilleries have stepped up their altruism as well, seemingly in response to current events over the past few years as much as their innate moral compass. Good Deeds Malt Whiskey is the most recent example of this movement.

Good Deeds is a collaboration between 10 craft distilleries, each of which has donated some whiskey to the blend—hence, the “malt whiskey” designation instead of “single malt.” What started out as a Facebook group called Good Guys Distillers in 2017 morphed into Good Deeds Spirits this year with a stated mission of collaborating on unique whiskey releases that will benefit different causes in the spirits industry. Or as the press release puts it, “to be a force for good.”

This inaugural release is a blend of whiskey from the following distilleries, some of which are donating the first they’ve ever released: Balcones Distilling (Waco, TX), Bently Heritage Estate Distillery (Minden, NV), FEW Spirits (Evanston, IL), Headframe Spirits (Butte, MT), Rogue Spirits Distillery (Newport, OR), Santa Fe Spirits (Santa Fe, NM), Sonoma Distilling Company (Rohnert Park, CA), State Line Distillery (Madison, WI), Triple Eight Distillery (Nantucket, MA) and Thornton Distilling Company (Thornton, IL). Descriptions of each whiskey’s specs, including age and mash bill, can be found here if you are interested in the nitty gritty details. The blenders in charge of the project were Johnny Jeffery from Bently Heritage Estate Distillery, Randy Hudson from Triple Eight Distillery, and John McKee and Reade Huddleston from Headframe Spirits. After blending, the whiskey was put into ex-bourbon barrels to marry for five months at Headframe in Butte before being bottled at 46 percent ABV.

On the nose of this blend, you first encounter brown sugar, honey, dried fruit and some caramel notes. A sip reveals a complex melange of flavors, including notes of candied apple, cinnamon, leather, vanilla, and raisin. Finally, a bit of orange and cherry lingers on the relatively mild finish. Overall, this is an interesting American whiskey, and one that those who have yet to venture beyond the world of bourbon and rye would likely enjoy.

There are just 1,000 bottles available to purchase online, and 100 percent of the profits will be donated to STEPUP, an initiative founded by the American Craft Spirits Association that is focused on diversity and inclusion in an industry that has not always been known for such things. STEPUP stands for Spirits Training Entrepreneurship Program for Underrepresented Professionals and supports internships and training for underrepresented people in craft spirits. So check out this bottle, and know that you are supporting a good cause while also enjoying a thoughtful and uncommon blend of American malt whiskeys.