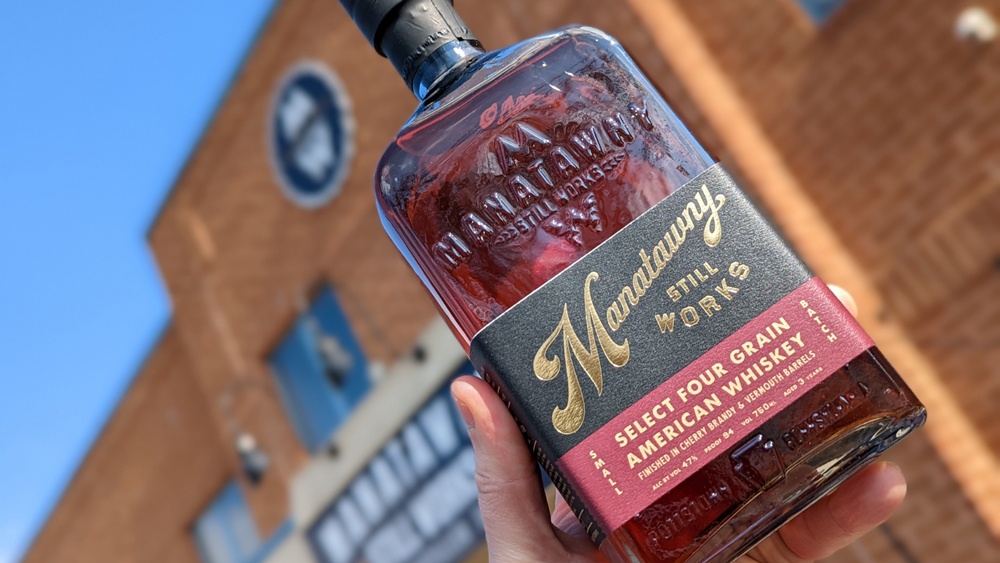 Let’s consider the Manhattan for a moment, one of the most elegant and simple whiskey cocktails. Just four basic ingredients are required—vermouth, bitters, whiskey (traditionally rye) and a maraschino cherry for garnish (preferably Luxardo instead of those bright-red, artificial ones). This drink is a classic for a reason. It offers equal parts sweet and spice, and a booze-forward character that makes it a good start or end to any evening. Over the past few years, there have been many attempts to translate this cocktail to the expanding ready-to-drink market, and the results have been, well, mixed. While this new whiskey from Pennsylvania craft distillery Manatawny Still Works isn’t actually an RTD, it is one of the best Manhattans in a bottle that I’ve tried in recent memory and certainly the most interesting.

The distillery was founded in 2013 in Pottstown, PA, just northwest of Philadelphia. Master distiller Max Pfeffer focuses on producing four-grain whiskeys that don’t meet the qualifications of bourbon, rye or American single malt (official definition TBD) due to their unique mash bills. Case in point is this new release, a four-grain whiskey finished in cherry brandy and vermouth barrels. The mash bill is as follows: 80 percent malted barley (2 percent of this is roasted), 9 percent wheat, 9 percent oat and 2 percent rye. Given the fact that it’s initially aged in #3 char new oak barrels, this would technically make it a malt whiskey that is finished in other types of casks, but the distillery just goes with “four grain American whiskey.” “While TTB definitions are meant to protect the consumer, they have also inhibited whiskey diversification, as we saw with beer during its craft movement,” said Pfeffer when I asked about this in an email. “If you taste and drink our Four Grain Whiskey, you would not associate it with the common idea of what malt whiskey is… Whiskey is more than just bourbon, rye or country-specific whiskies. Our purpose in making this whiskey is to expand the idea of what whiskey can be.”

In that, he has succeeded. After two years of initial maturation, two single barrels were put into an ex-vermouth and ex-cherry brandy cask for another year before being blended back together. Pfeffer said they used all of the vermouth barrel, but only 20 percent of the brandy barrel because of how intense the flavor became—not unlike the proportions in a Manhattan when you think about it. And while actual Manhattan ingredients aren’t utilized here, the flavors certainly are, and the results are impressive. There are notes of cherry and orange on the nose, with sweet vermouth, spice, and a dollop of citrus on the palate. It’s not overly sweet, and to be frank it’s better than some Manhattans I’ve had at a few bars and restaurants.

The high percentage of malted barley in the mash bill delivers some of the chocolate and maltiness you’d expect, with the roasted portion playing an important part (“A little roast goes a long way,” said Pfeffer, pointing to the subtle coffee and cocoa notes it imparts). But the other grains really balance out the palate with some sweet grain and spice. But it’s the barrel finish that is obviously the key to this cocktail in whiskey form, with a pronounced influence that is somehow not overbearing. Unfortunately, this bottle is only available to order in Pennsylvania, at least until the Keystone State updates its antiquated liquor laws. But if you reside there, or know someone who does, definitely check it out. And if you don’t have the time, or enough booze on hand, to whip up a bunch of Manhattans, this will serve you much better than any RTD currently on the market.