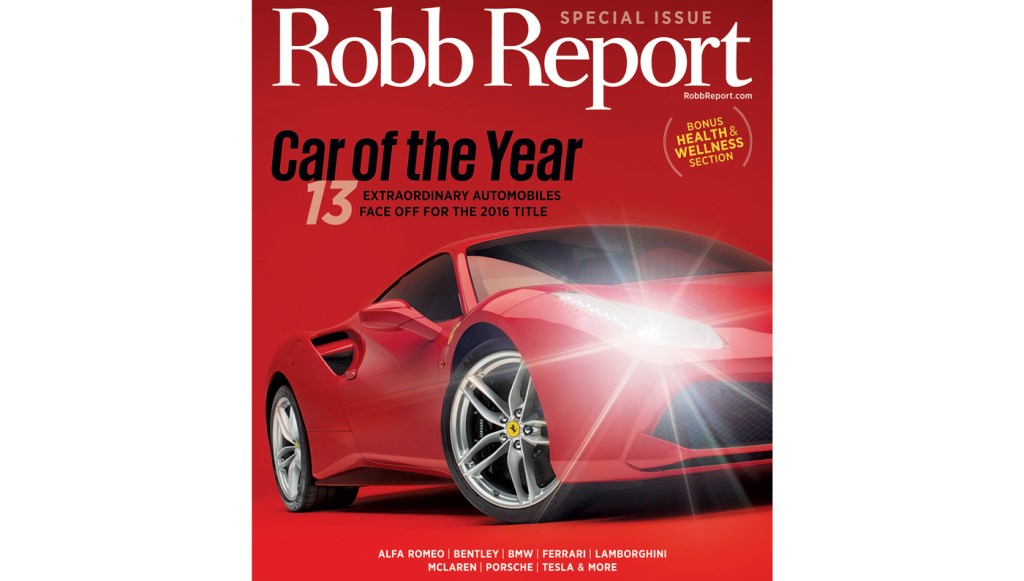 NEW YORK, NY (March 23, 2016) — Robb Report, the leading voice in luxury, has revealed the winner of its highly anticipated Car of the Year competition. Unveiled in the April issue of the magazine, now on newsstands, Robb Report’s annual extravaganza pitted 13 cutting-edge creations—from Ferrari, Tesla, Alfa Romeo, McLaren, and more—against one another in a real-world contest for the coveted title.

Now in its 23rd year, the annual invitation-only multi-vehicle test-drive brought a dedicated group of Robb Report readers and editors together to the streets of California to try out and discuss the automotive industry’s most spectacular new sports and luxury models, and decide which is most deserving of the title Robb Report Car of the Year. For the first time in a decade, Robb Report moved the competition from Napa Valley to San Diego, at the Fairmont Grand Del Mar Resort, which served as a home base for eight rigorous driving sessions over the course of about two weeks.

“The annual unveiling of Robb Report’s Car of the Year is one of the most anticipated events in the automotive community,” says Brett Anderson, editor in chief. “Unlike most other honors in that industry, this award is bestowed on behalf of a select group of readers—all of them qualified purchasers of these vehicles who already own examples from many of the competing marques. These individuals each spend a full day driving the contenders, putting them through their paces and carefully scoring each model. Their exacting standards, ownership experience, and insightful feedback—combined with the expert feedback of the Robb Report editors—make the Car of the Year title a coveted and respected prize.”

In addition to showcasing behind-the-scenes photos and exclusive videos from Robb Report’s Car of the Year competition, RobbReport.com offered up the opportunity for readers to cast their own votes and choose their personal favorite. See which car topped the online poll in 2016 at RobbReport.com/COTY.

Rounding out the April issue is Robb Report’s bonus Health & Wellness section, in which Robb Report’s team of wellness experts explore everything from a Lamborghini-inspired exercise machine to the latest science on managing stress. Interested in discovering and experiencing the latest in health and wellness with the experts and pioneering brands that started the conversation? Take part in Robb Report’s second annual Health & Wellness Summit, July 14–17, 2016, at the Montage Deer Valley in Park City, Utah.

Robb Report iPad and iPhone subscribers will enjoy a digital bonus feature in April that looks at some of the most distinguished driving accessories from Porsche Design, Parmigiani Fleurier, and more, enabling you to look every bit as stylish as your ride. Robb Report is available as a digital edition for the iPad and iPhone via the iTunes App Store and through Zinio.

Uncover the best brands and designs and access real-time news on the latest luxury products and services with Robb Report’s daily newsletter, Robb Report Insider. Sign up today for your daily dose of luxury.