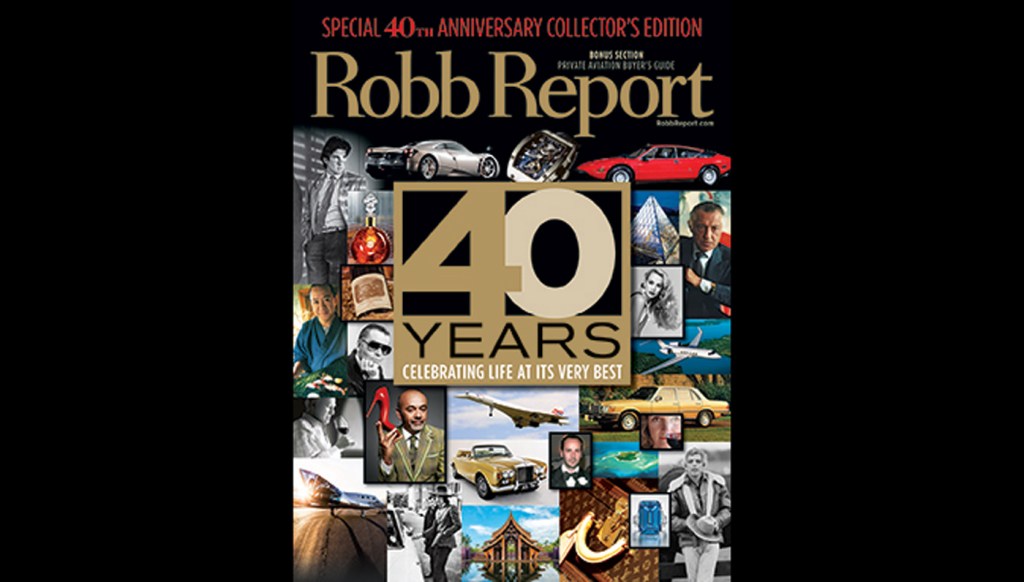 NEW YORK, NY (September 29, 2016) — Robb Report is celebrating 40 years as the leading voice in global luxury with its largest October issue in nearly a decade. The special collector’s edition of the magazine—now on newsstands—remembers past moments, products, and pioneers whose status as luxury icons has been cemented throughout history, and celebrates the future innovations and mavericks that promise to change the luxury game in the decades to come.

“Volume 1, issue 1, of Robb Report first hit newsstands in 1976,” said editor in chief Brett Anderson. “Devoted to advertisements for new and vintage Rolls-Royces, the brand evolved over the course of four decades to eventually become the nation’s first widely circulated luxury lifestyle publication, which currently serves as the luxury industry’s global source for the best of the best, with a footprint that now encompasses 17 international editions worldwide. For all of the changes that have taken place in the years since Robb Report first hit newsstands, the standards of exceptional quality, beauty, and precision have remained as constant in the hearts and minds of true connoisseurs as they have in the pages of the magazine. In this special collectible issue—the largest October edition in nearly a decade—we take readers on a fact- and insight-filled journey through the past and future of luxury, while celebrating 40 years of this iconic brand.”

The October edition of Robb Report retraces historical steps through these four decades of luxury with a rundown of the breakthroughs, bold ideas, and successes that have shaped the world of luxury. The issue spotlights instances of inspiration and invention that have resulted in creations—automobiles, airplanes, watercraft, watches, jewelry, wines, spirits, apparel, destinations, and more—that remain influential classics today. Compiled in collaboration with a group of industry leaders, sports luminaries, and film and television stars—including golf great Greg Norman, actress Brooklyn Decker, and master chef Curtis Stone—Robb Report presents the most iconic luxury items and ideas of the 20th and 21st centuries.

For the full slate of 40th anniversary coverage, including Robb Report’s picks for some of the best examples of luxury from decades past, visit RobbReport.com/40.

From a Lamborghini’s Roar to a Moët’s Pop: How Sound Became One of Luxury’s Most Powerful Tools

The Sound of Luxury: Inside Robb Report’s October Design Issue