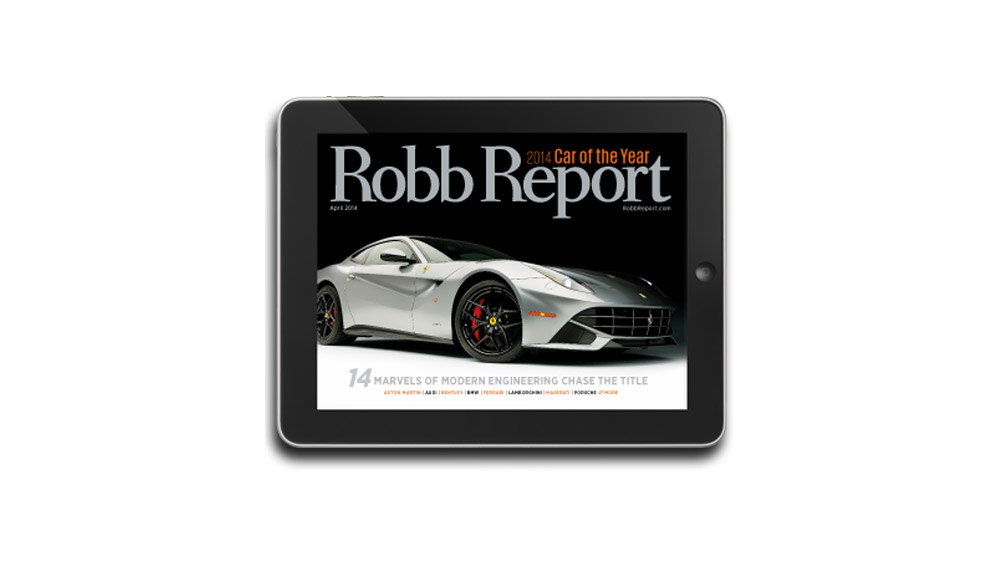 MALIBU, CA– In an “unprecedented landslide decision” by Robb Report editors and a panel of guest judges made up of members of the exclusive Robb Report Club, the Ferrari F12berlinetta has been selected as the luxury lifestyle authority’s 2014 Car of the Year.

Now in its 21st year, the award goes to an automobile whose technical excellence, styling, and performance captivate Robb Report’s judging panel. This year’s Car of the Year competition involved 100 judges and was held at the beautiful Meadowood resort in Napa Valley.

The full results from the competition will be revealed in Robb Report’s April issue, which is scheduled to hit print and digital newsstands on March 25. More comprehensive information is accessible at http://robbreport.com/paid-issue/car-year-2014-sweeping-success.

Robb Report will also offer extensive Car of the Year digital enhancements in its tablet edition and on its website, RobbReport.com. These include slideshows and exclusive video of the Ferrari F12 Berlinetta, the Audi R8 V10 Plus, and the Lamborghini Aventador LP700-4 Roadster shot during test-drives in California’s stunning Napa Valley.

“Never before have our judges displayed such unanimity in choosing a Car of the Year winner,” said Mr. Ross. “Most agreed that the F12 has it all: power, luxury, surgical response, and a shape that is seductive yet subtle for the brand. However, the exhaust, from one of the company’s most potent V-12s, clearly and loudly identifies the F12 as a Ferrari.

Echoing those sentiments, Mr. Dean recalled how the judging panel “experienced the performance of Ferrari’s quickest road car (excepting the new LaFerrari hybrid), which is powered by a 731 hp V-12 that enables a zero-to-60-mph time of under 3.1 seconds and a top speed of 211 mph. And they felt how smoothly the car handled, whether it was engaged in second-gear dawdling or high-performance brawling. Together, these elements advance the F12 to endless purpose and automotive perfection.”

“We are pleased the F12 hit all its marks in terms of performance, handling and design with the distinguished Robb Report jury,” said Marco Mattiacci, President & CEO of Ferrari North America.  “The Robb Report Club naturally mirrors our clients’ reactions and expectations and their affinity for the F12berlinetta underlines not only its impressive performance, but also the unparalleled driving emotion that Ferrari continues to deliver.”