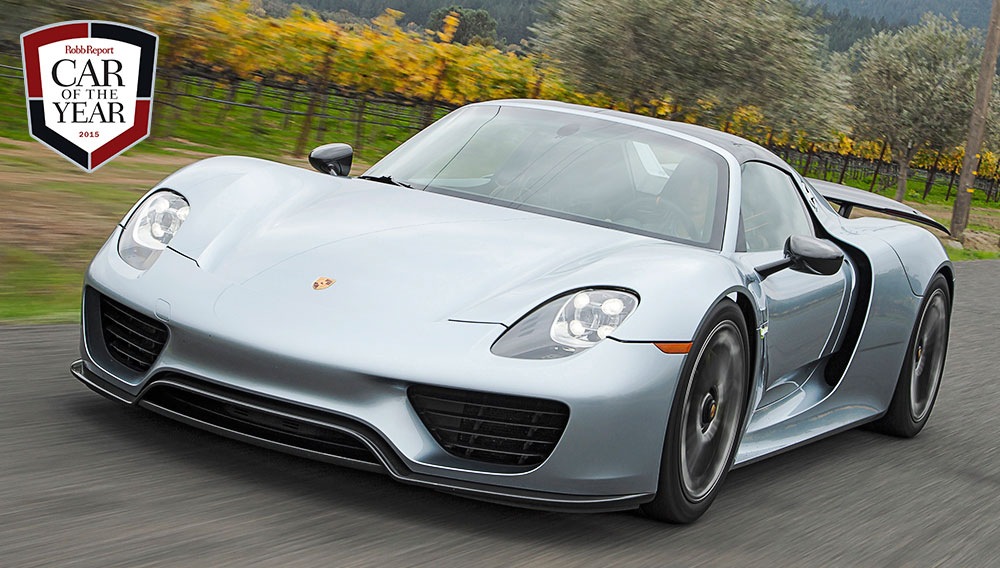 DETROIT (January 12, 2015) – Citing its prowess as “a plug-in hybrid that has more in common with a Formula 1 racecar than a daily driver,” the Porsche 918 Spyder has been selected as the 2015 Car of the Year by international luxury lifestyle authority Robb Report.

Presented at the 2015 North American International Auto Show in Detroit to Detlev von Platen, president and CEO of Porsche Cars North America, the award signifies the second time that a Porsche model has earned Robb Report Car of the Year honors in the past three years. Most recently, the seventh-generation Porsche 911 Carrera S earned the distinction in 2013.

“Given Detroit’s status as a global leader in the automobile industry, we felt it was imperative this announcement be made in the city synonymous with automotive innovation, technology, and design,” said Robb Report senior vice president and group publisher David Arnold, who made the presentation.

Now in its 22nd year, the award recognizes an automobile whose technical excellence, styling, and performance captivate Robb Report’s judging panel. This year’s Car of the Year competition involved about 140 judges, and was held at Napa Valley’s Meadowood resort.

“This is the rarest, fastest, quickest, and most groundbreaking production Porsche ever,” raved Robb Report’s automotive consultant, Robert Ross. “The hybrid supercar develops nearly 900 hp from a 4.6-liter V-8 gasoline engine and two electric motors. They catapult the machine—initially in silence, until the V-8 kicks in—to speeds wholly inappropriate for public roads. But extreme performance is not the car’s only attribute. In fact, the 918 Spyder is docile at dawdling speeds, and it is as comfortable as any sports car.”

Selections resulted from extensive test-driving by a panel of experts that included Ross; Robb Report’s editor in chief, Brett Anderson; senior editor Shaun Tolson; and senior correspondent Paul Dean. These journalists were joined by about 140 members of the private Robb Report Club, which includes top executives and Robb Report readers.

More information on the 918 Spyder is available at RobbReport.com/coty. In addition, full results from the competition will be revealed in Robb Report’s March issue, which is scheduled to hit print and digital newsstands in late February.

Robb Report will also offer extensive Car of the Year digital enhancements in its tablet edition and on its website, RobbReport.com. These include slideshows and exclusive video of the Porsche 918 Spyder shot during test-drives in California’s stunning Napa Valley.