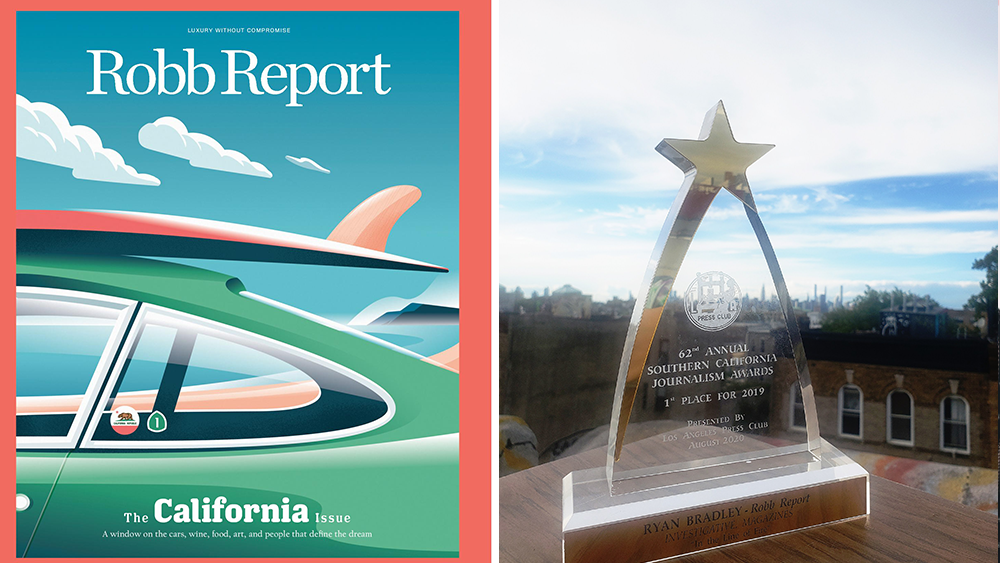 Robb Report has taken top honors for investigative journalism at the Los Angeles Press Club’s 62nd Southern California Journalism Awards, which were announced on Saturday via a virtual ceremony.

The winning story was Ryan Bradley’s “In the Line of Fire,” which was written in response to the 2018 wildfires that devastated parts of California. When the dust finally settled on this catastrophe, people wanted answers—why were some homes saved from destruction while others were not? Bradley’s piece investigates whether an anti-wealth bias played a role in how the fires were quelled, or if private firefighting firms employed by insurance companies or some wealthy individuals actually hindered the overall effort. The story was originally published in the April 2019 issue of Robb Report, and its reporting remains just as relevant today, as deadly fires once again sweep through parts of the Golden State.

In commenting about the piece, the judges said, “Reading about any type of devastation is at times difficult, but Bradley’s well-told personal story in exploring the impact of fire is moving.”

This year, the LA Press Club received 1,670 submissions to the SoCal Journalism Awards across all categories, according to the organization. Local television reporters, KTLA’s Cher Calvin and ABC7’s George Pennacchio, hosted the presentation and announced all of the winners.

Lisa Richwine, president of the LA Press Club, delivered opening remarks: “These competitions recognize serious journalism and encourage reporters at competing outlets to up their game, dig deeper and communicate the facts as clearly as possible,” she said. “First and foremost the free press is a public service that is vital to our nation, and that’s what we’re here to celebrate.”

The LA Press Club’s mission is to both support and promote quality journalism in Southern California. This is Robb Report‘s first win at the SoCal Journalism Awards.