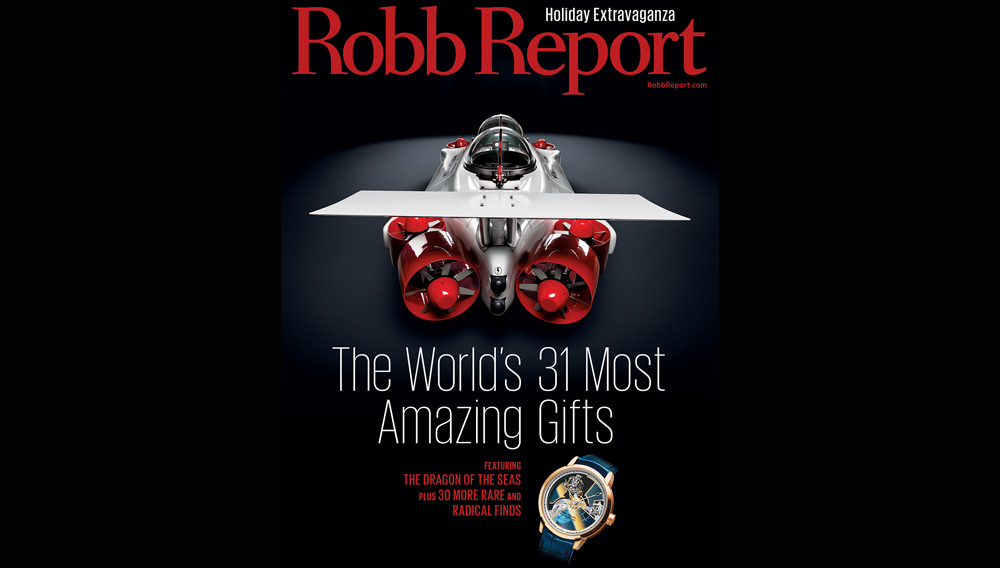 NEW YORK, NY (December 1, 2015) — The international luxury lifestyle authority Robb Report gets in the holiday spirit with its December issue, on newsstands now. The highly anticipated issue includes the annual Robb Report Ultimate Gift Guide, which this year spotlights 31 of the most extravagant gifts available anywhere, ranging from an amphibious aircraft and a soaring submersible to a one-of-a-kind grand-touring car and an incomparable cruise. The spirited selections in Robb Report’s 2015 guide are sure to inspire a festive and fabulous holiday season.

The Ultimate Gift Guide, now in its 32nd year, offers up the most items and experiences to be included within the pages of Robb Report in decades. With three dozen pages of inspiring gift-giving content, the 2015 collection brims with engaging ideas for connoisseurs of all categories. Robb Report’s editorial team secured a number of items created exclusively for the 2015 guide, including ‘a golden opportunity’ with Jewelmer Joaillerie which has extended the invitation for one reader and a guest to visit its pearl farm in Palawan, the Philippines. The ultimate gift includes a one-of-a-kind strand of rare golden South Sea pearls and a private tour of the Jewelmer pearl farm in Taytay. If rare golden pearls don’t strike your fancy, go ‘above andbeyond’ this holiday season with a donation to Rhinos Without Borders and fund the organization’s capture, transport, and release of two rhinoceroses. For this gift, andBeyond and Great Plains Conservation have created a special 10-day safari on which guests will visit lodges in South Africa and Botswana and have the opportunity to participate in either the capture or release of two rhinos.

“The editorial staff of Robb Report have more than a half century’s worth of combined experience in tracking down the rarest, most unusual, and finest objects and experiences on the planet,” said Robb Report editor in chief Brett Anderson. “Each year, we push ourselves to come up with even more imaginative and irresistible gifts. With this year’s holiday package—certainly our best—we’ve raised the bar for next year’s Ultimate Gift Guide, which will be a celebration in its own right as we’ll be marking our 40th anniversary year.”

Robb Report’s focus on the festive continues online with a carefully curated collection for holiday shoppers who appreciate that some ultimate gifts are small enough to fit under a tree. From top-shelf spirits, including the limited-edition Patrón en Lalique: Serie 1, to handmade treasures, RobbReport.com has compiled more than 80 options to ensure that your family and friends receive the best of the best this holiday season.

Just in time to ring in the New Year, Robb Report offers up its annual review of the most enticing cigars. From rare limited editions and revivals of formerly forgotten shapes to cigars made with tobaccos from previously untapped regions, Robb Report unwraps the quintessential cigars to warm up the winter months.

The digital edition of Robb Report serves up an exclusive bonus feature with 10 craft cocktails perfect for holiday hosting. Readers can also vote for their personal favorite in Robb Report’s 2016 Car of the Year. The results will be announced in the April 2016 issue of Robb Report, but readers can review the contenders—and vote for a winner—now. Robb Report is available as an interactive edition for the iPad and iPhone at the iTunes App Store and through Zinio.

Uncover the best brands and designs, and access real-time news on the latest luxury products and services, with Robb Report’s daily newsletter, Robb Report Insider. Sign up today for your daily dose of luxury.