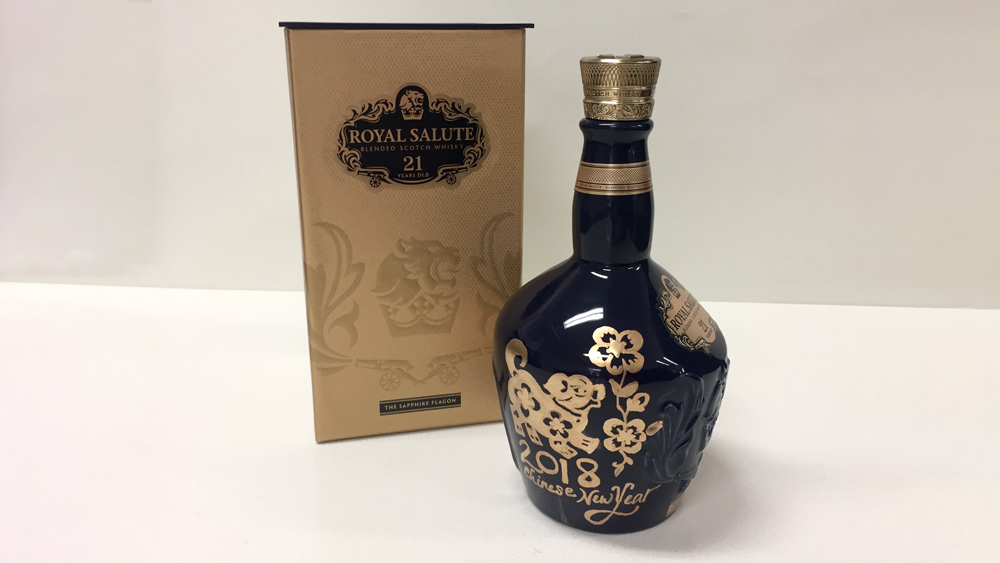 This year, the cannon fire of a 21-gun salute from the United Kingdom is aimed at paying tribute to the Year of the Dog, the 11th in the Chinese zodiac’s 12-year cycle.

In British naval parlance, a 21-gun salute stems from a tradition of acknowledging a royal event, such as a monarch’s birthday or anniversary. But in spite of the voluminous clouds of smoke and the roar of exploding gunpowder, it is a friendly overture. In fact, it’s a sign of honor and respect; originally, British warships would fire 21 of their cannons harmlessly across the ocean to symbolize that they were now unloaded and could no longer cause damage to the vessel alongside them.

It was this “royal salute” on June 2, 1953, that lent its name to a celebratory blend of rare single-malt whiskies—all of which were at least 21 years old—created by Chivas Brothers to commemorate the coronation of Queen Elizabeth II. Since then, Royal Salute 21 Year Old has become a very limited annual release, made distinct not only by its rich, faintly honeyed smoke and thick fruit flavors but also by its handcrafted Wade Ceramics porcelain flagons, which are fired in either a ruby, sapphire, or emerald glaze to symbolize the precious gems of the Imperial State Crown. However, only the sapphire-colored flagons are exported to the United States.

In keeping with this tradition, Ceci Johnson, creative director of the luxury art-design house Ceci of New York, has selected and hand-painted 10 limited-edition, specially molded, sapphire-hued flagons with an exclusive gold design symbolizing her interpretation of the Year of the Earth Dog. Priced at $300 each, they’re available only at Reserve Bar in New York, and once the 10 are sold, they will not be produced again.