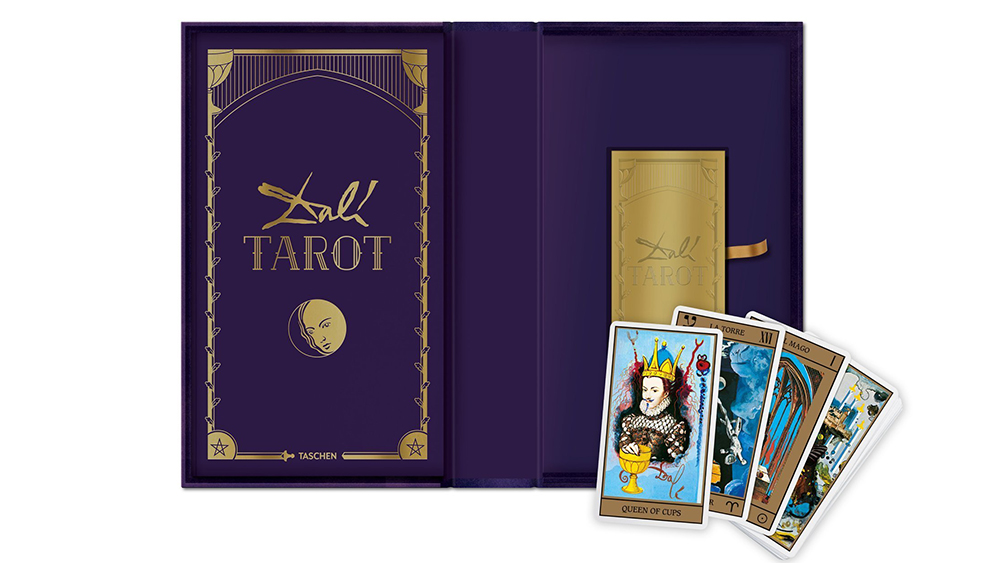 His art may be taken seriously, but, thankfully, Salvador Dalí never assumed the same attitude when it came to himself. The prolific 20th-century artist is perhaps best known for his mind-bending paintings––think 1931’s The Persistence Of Memory, arguably his most famous work––yet Dalí was unafraid to explore other mediums. Taschen’s forthcoming release of Dalí-designed tarot cards further proves just how versatile the Surrealist master was.

Originally commissioned by Albert R. Broccoli, the American movie producer who famously made many films in the James Bond franchise, the artwork for this unique deck was intended to be part of the 1973 Roger Moore-led Live And Let Die. The deal fell through, but Dalí was so invested he completed the project on his own.

Totaling 78 cards, each one draws inspiration from Western art’s iconic canon as reimagined through Dalí’s singular lens, like his 10 of swords card depicting the assassination of Julius Caesar or the Magician reconfigured with his self-portrait, On one card his wife, Gala, stars as the Empress. It is said that Gala long nurtured Dalí’s interest in spirituality and encouraged him to partake in this unusual assignment.

But this isn’t the first time the set has seen the light of day. Taschen originally released it in a limited edition in 1984, though that set has long been out of print. It has been brought back in its entirety with highly detailed, full-color artwork that functions just as well for coffee table dressing as it does for occult purposes. If anyone should like to use the cards with the latter intention, Tachen has them covered with an extensive companion book with instructions on how to perform readings. It also documents the set’s fascinating making-of process. All of it comes housed in a handsome royal purple box embossed with rich gold detailing to enhance its mystical aesthetic.

Purchase your own copy on Taschen’s website when it drops on November 15th for $60 or reserve one via pre-order now.