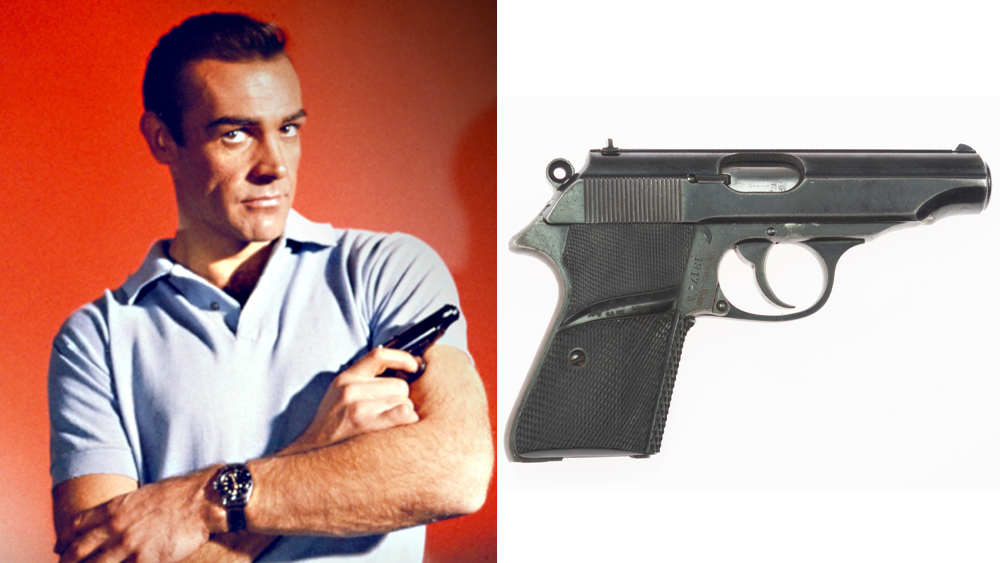 Julien’s is aiming to really blow collectors away with it’s latest sale. Figuratively, that is. The auction house is offering a trove of bangin’ Hollywood memorabilia, including the iconic gun Sean Connery wielded in the very first James Bond film Dr. No.

The Walther PP handgun is as intrinsic to 007 as his shaken Martini and has been featured as a hero weapon throughout the films and books for nearly 60 years. The late great Connery, who died in the Bahamas on October 31 at the age of 90, appeared in seven of the franchise’s thrillers with the Walther PP handgun in tow and left behind an incredible legacy. Indeed, the silhouette of Bond holding this pistol has been immortalized in pop-culture history.

The deactivated pistol was originally identified by the armorer that worked on the ‘62 classic, Bapty in the UK, who held it until 2006. Come December 3, the gun will go under the gavel at Julien’s Icons & Idols Trilogy: Hollywood auction and is expected to fetch between $150,000 and $200,000.

“We were deeply saddened to hear the news of Sir Sean Connery’s passing as we were preparing to unveil our upcoming auction,” Martin Nolan, executive director of Julien’s Auctions, said in a press release. “We are honored to include his Walther PP Pistol as our auction’s headlining item along with hundreds of other historical memorabilia.”

Rolling with the gun theme, Julien’s is also auctioning the fighter helmet donned by Tom Cruise aka Pete “Maverick” Mitchell in the ever-popular ‘80s film Top Gun. The rare on-set artifact was customized by the production and features eagle insignia, striped detailing, and, of course, “MAVERICK” emblazoned across the front. Should you feel the need to purchase, the helmet is estimated to sell for between $30,000 and $50,000.

Other highlights include the black leather motorcycle jacket donned by Arnold Schwarzenegger in James Cameron’s ’80s sci-fi classic The Terminator (estimate: $30,000—$50,000), a black eye patch worn by “the Duke” John Wayne in his Academy Award-winning role as Rooster Cogburn in ‘69 classic True Grit (estimate: $2,000—$4,000), along with a spate of props and costumes from Pulp Fiction, Terminator 2: Judgement Day, Back to the Future and more.