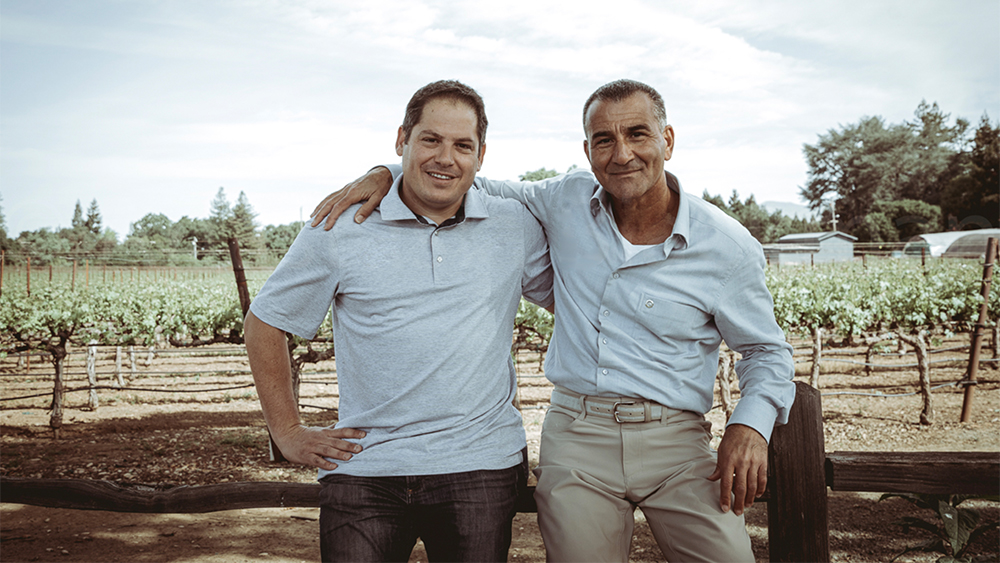 Dinner at the Koschitzkys’ Napa Valley home—when Sam and Nada Simon have flown in from Michigan to join—might involve baba ghanoush, tabbouleh or fattoush, lamb marinated in Baharat (a spice blend that is to Middle Eastern cooking what garam masala is to Indian cuisine) and baklava, always baklava—Dana Koschitzky is a pastry chef, after all. The families hail from two disparate parts of the Middle east, but they join together over the shared flavors of their tables. And over the last four or five years, they’ve come together over personal experience too, their tragic family histories a springboard for launching one of Napa’s newest exciting wine brands: Simon Family Estate.

It’s an alliance of two immigrant families. The Simons are from Iraq, the Koschitzkys from Israel. Over a lineup of new Simon Family wines recently, Sam Simon and Maayan Koschitzky—who lovers of great Napa bottles know as the director of winemaking for Philippe Melka’s acclaimed winemaking group Atelier Melka—spin their very separate family stories. What my iPhone records, against the backdrop of new tragedy looming in Eastern Europe as we speak, is eerily similar displacement and loss, but also the synergy of parallel life paths.

Sam Simon’s story begins in the Armenian genocide of the early 1900s, in which his grandfather lost his entire family, surviving only by escaping across the border from Turkey into northern Iraq. There, Simon’s father grew up and built a thriving shoe-manufacturing business, even supplying boots to the military. But a successful Armenian Catholic was less than welcome in Iraq, and under threat the family was forced to decamp to Lebanon, empty-handed. Two hundred dollars, a gift from the church, brought Simon’s parents and his four siblings to Michigan, where they had friends. “The rest,” he says, “was the American dream.” But as that dream is wont to be fulfilled, he describes long hours of menial work (cleaning tools and pumping gas in the small group of stations his father came to own), and the intrepid purchase, when he was only 19, of a single big rig to dive into diesel at a time when Shell would have none of it. (His official uniform spoke of a battalion of employees, when there was only the one truck and one very young man.) Values born of family bootstrapping—that work ethic, self-reliance, family, finding the right people (including Nada, who he hired away from Ford Motor Co. before he could even afford the salary and car she demanded)—grew the single truck into the Atlas Oil company of today.

Two of the Cabs offered and the winery’s Rosé.  Simon Family Estate

Koschitzky’s tale loops even closer to the news of the day. His mother’s family, from Hungary, was loaded en masse onto trains bound for Auschwitz. Only his grandparents—18 years old at the time—escaped the fences, fled into the forest, made their way to Italy and from there boarded a boat to Israel. The camp numbers branded on their arms seared Koschitzky’s young memory. On his father’s side, in Poland, his grandparents were among the lucky few not herded into the Warsaw ghetto; released by the Soviet Union, they opted to finally settle in Israel to help establish a Jewish homeland. For his part, Koschitzky threw down in support of the country as well, as a paratrooper in the Israeli military, where, he tells me, “you always see combat. I brought friends home in boxes.” It was a focus on wine equipment as a mechanical engineering student at the University of Tel Aviv that captured and redirected him. “I applied for an internship at a winery,” he says, “and never looked back.”

As the stories continue to spool, we begin tasting and the beauty in our glasses is, on one hand, a disconnect with the struggles my phone is still recording. On the other, it’s both product and promise of cross-cultural collaboration, or as Nada Simon says, “making the most of all of our cultures together—Iraqi, Israeli and American.” First up, the Simon Family Estate 2021 Tigress Rosé of Grenache indulges Nada’s taste—“summer water,” she calls it. From a tiny block of Grenache persevering in Rutherford and priced at $35, it can’t be a good business model, but it’s delicious—dry and aromatic, bursting with rose petals, strawberry and peach laced with grapefruit and lime zest. Up next, a reference point–defying 2019 Golden Ore Sauvignon Blanc, from old, dry-farmed vines, is complex, expressive and mouth-fulling. Wet-stone minerality and a touch of flint balance high-soaring white blossom and citrus aromas over an interplay of stone fruit and grapefruit.

On the red side, the Simon Family Estate 2019 Cabernet Sauvignon over-delivers on its $125 price tag with beautiful dark fruit. Complex aromas of blackberry, plum, spice and earth give way to a fine-textured palate with appealing acidity. A pair of 2019 Cabs named “Double Blessings,” for the Simons’ (clearly dissimilar) twins, Michael and Peter, offer a fascinating contrast in styles possible across the valley—Michael, symbolized by a sword, leans on the structure and power of Coombsville fruit, exotic spice and savory herbs; Peter, represented by a key, expresses the more relaxed generosity of warmer, up-valley fruit, with mocha and florals punching up the wow factor. But the jewel in lineup is the Simon Family Estate 2019 Reserve Cabernet, more than flagship-worthy with impeccable balance and compelling complexity, brimming with beautiful fruit—plum and berry—laced with crushed herbs, impressive structure giving way to a lush midpalate, and depth and texture unfolding in an endless finish. This one won’t be released until early next year, making the winery’s Founder’s Circle—which you can join now—an awfully good place to be when it is. (Simon Family also has an Allocation tier, which gives you an opportunity to purchase within limits.)

So how does a self-described Hennessey man from Michigan morph into a California vintner passionate enough to put his family name—something his father always said was all they had—on a new wine brand? (That at a time when many prominent family wineries are selling to big outside players: Araujo and its Eisele Vineyard, Colgin and the latest, Shafer.) In large part, credit Bill Harlan and the Napa Valley Reserve, where would-be winemakers can dip their toe in or take a deep dive. Simon describes buying in during the early aughts. “We were so proud of that Simon sign on our five rows,” he says. “We made our own label. We got into the whole process—picking, crushing, destemming, bottling, labeling. It created an itch.” He asked himself, “How do I figure this out?” The answer: “Find the right people.”

As it turns out, Koschitzky has built his winemaking businesses on the right people too—long-term relationships with growers who see eye to eye, meeting of minds on style and integrity. They met just a few years back, as Sam had known Maayan by reputation and asked him over for dinner while he was staying at Meadowood. The They hit it off even before they got around to the subject of wine and continued to meet after. Then, about a year and a half in, they decided in 2019 to start making wine together. And as the Koschitzkys and Simons—Jewish Israelis and Armenian Christians (by way of Baghdad), respectively—explored all of the above in laying the groundwork for Simon Family Estate, their shared history and love of common foods (and, well, maybe a little bit of Screaming Eagle along the way, where Maayan once worked) expanded beyond business. “We connect on a lot of levels,” says Koschitzky, “but mostly, this is personal.”