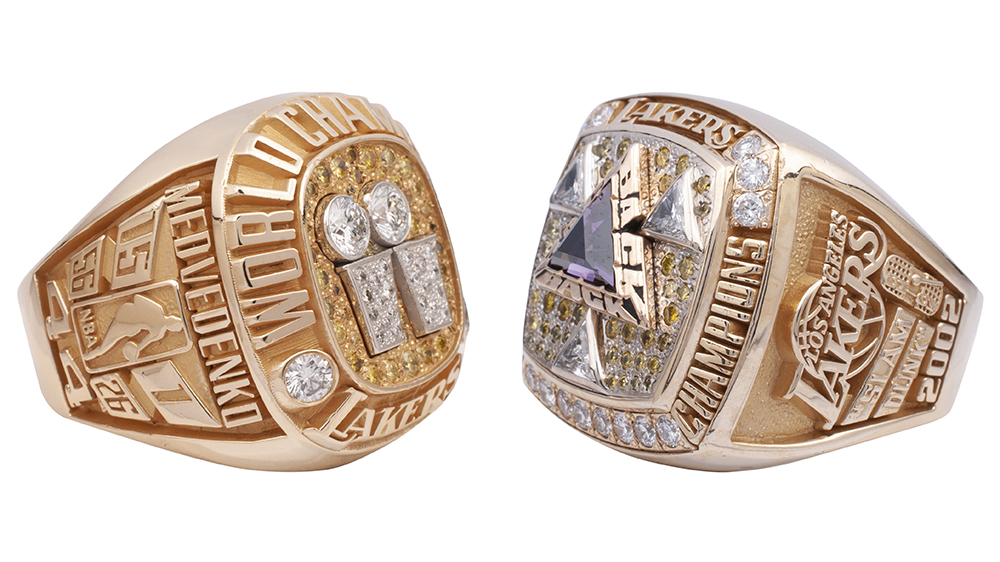 A former NBA player is selling two of his most prized possessions in an attempt to help Ukraine during its time of need.

Slava Medvedenko, who played for the Los Angeles Lakers for six of his seven seasons in the league, is going to auction off two of his NBA championship rings to raise money for his native country, according to the Associated Press. The diamond-encrusted baubles could bring in over $100,000 for the war-torn nation.

The rings are from Medvedenko’s first two seasons in the NBA. He didn’t get much game time during the 2000-01 season, but the Ukrainian power forward was a regular contributor the next season, during which the Lakers won the third of their three titles while led by Shaquille O’Neal and Kobe Bryant. The rings aren’t as over the top as some of those commissioned by recent title winners, but they still feature all the gold and diamonds fans expect from a championship bauble.

Medvedenko’s jewelry will be auctioned off by SCP Auctions, a Southern California-based company that specializes in sports memorabilia. The auction house expects the rings, which will be sold separately, to bring in more than $100,000 combined. Whatever they sell for, the total gavel price will be donated to Medvedenko’s charity, Fly High Foundation. The organization seeks to rebuild the sports infrastructure of the nation’s schools and launch a network of social sports clubs.

“We want to restore gyms because the Russian army bombed more than a hundred schools,” Medvedenko told the wire service. “Our country, they need a lot of money to fix the schools. Sports gyms are going to be last in the line to fix it. In Ukraine, we have winter and kids need to play inside.”

Bidding for the rings is open now and will run through Friday, August 5. The auction is far from the only thing the former NBA player is doing to help his home country. Medvedenko, who lives in Kyiv, has served in the country’s territorial defense forces during the war, which started in February when Russia invaded Ukraine. He has also already sold and auctioned off t-shirts, jerseys and sneakers from his playing days to raise money for the country.