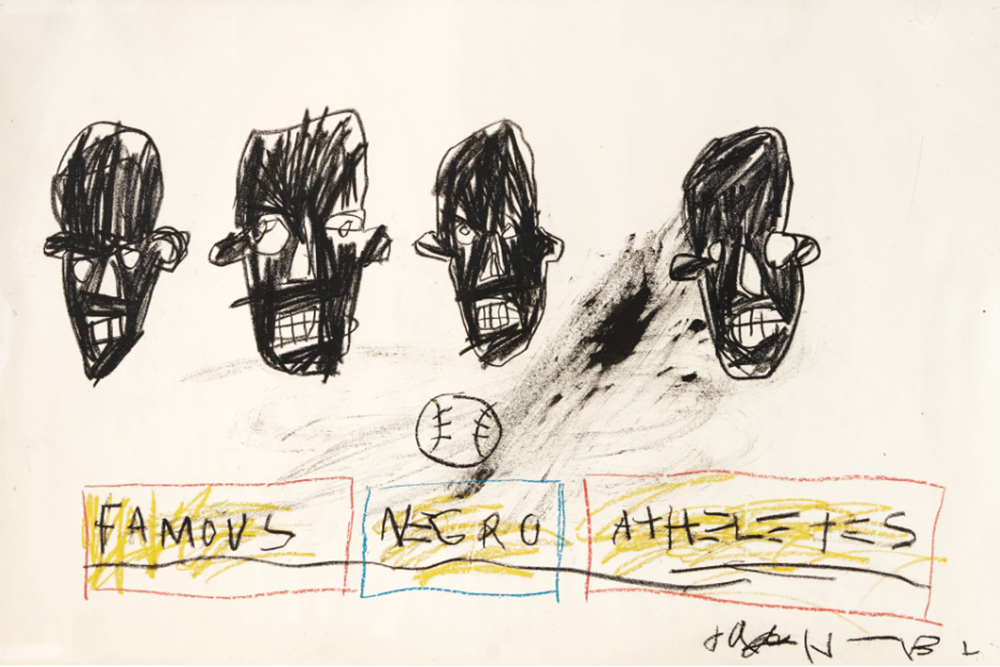 The work of the iconic late painter Jean-Michel Basquiat has seen its influence and value increase exponentially since he died in 1988 at just 27 years old. A new auction hosted by Sotheby’s is set to further cement his legacy with the sale of one of Basquiat’s most exhibited creations.

Part of the personal collection belonging to the late editor, writer and man about town Glenn O’Brien, Famous Negro Athletes was originally made as a graffiti mural. Basquiat recreated the piece using oilstick on paper in 1981 as a gift for O’Brien whom he befriended after the writer covered his graffiti work for High Times in early 1979. “One day, I walked by the tire store near my apartment and there was a huge mural with three angry Black faces and the legend ‘FAMOUS NEGRO ATHLETES,’” recalled O’Brien. “When I saw him later, I said: ‘That’s the best thing I’ve ever seen.’ The next day he brought me one on paper.”

Composed of four roughly scribbled, dark faces hovering above a baseball and the work’s title, Famous Negro Athletes is a commentary on the interplay between race and sports in the United States at the time. It figuratively proclaims that professional sports were one of the only fields in which Black Americans were permitted to excel, often at the expense of their individuality. While the work likely won’t be one of Basquiat’s most expensive sales, it does represent one of his most-exhibited pieces. It’s traveled all over the world to shows in Brooklyn, Milan, Paris and beyond.

“The piece was political in the sense that it presented so simply how society expected Black people to be athletes and not painters,” O’Brien said. It’s a theme that Basquiat explored throughout his career and emphasized when he said, “I think there’s a lot of people that are neglected in art.”

Sotheby’s Contemporary Art Evening Auction is set for November 14th. ‘Famous Negro Athletes’ is expected to sell for between $2.5 million and $3.5 million.