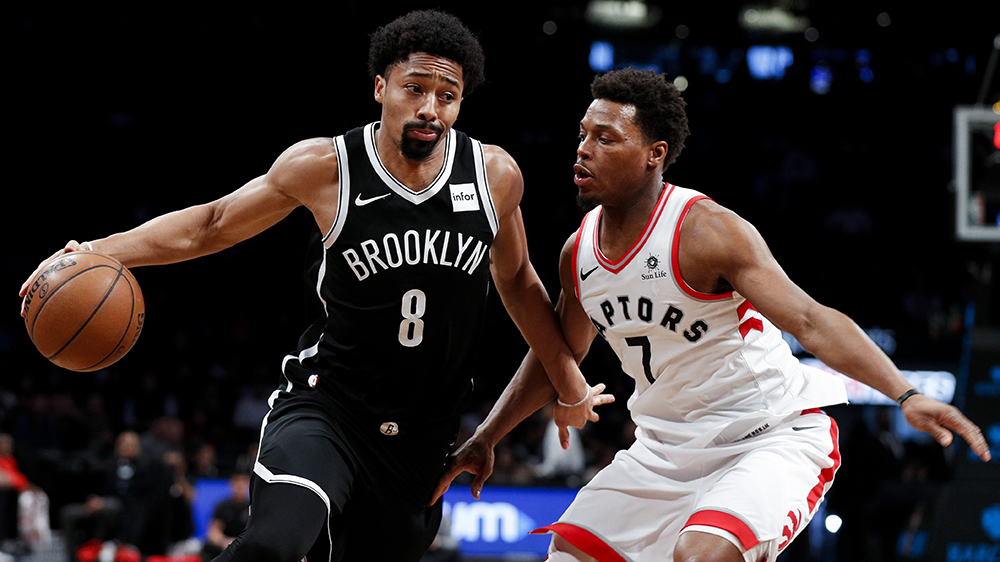 NBA players have been investing their money in businesses for decades, but this year one player is aiming to flip that model. Brooklyn Nets point guard Spencer Dinwiddie wants you to invest in him, and he plans to use blockchain technology to make it happen.

Last summer, the 26-year-old point guard informed the NBA that he would attempt to turn his contract into a vehicle for digital investment—that is, he would sell off digital shares of the contract. The league promptly denied his request, calling it a breach of the collective bargaining agreement. Undeterred, Dinwiddie went back to the drawing board and rejiggered the proposal. Four months later, he says he has figured out a way to make it work.

Earlier this month, Dinwiddie posted a video on Twitter in which he claims that after months of negotiations between his advisors and the league, he would begin selling shares in his contract—which is for three years and $34.36 million—starting January 13. His company DREAM Fan Shares, a blockchain investment platform, would sell 90 shares in his contract for $150,000 each to verified accredited investors under SEC Regulation D, Rule 506(c). The league is now reviewing the new proposal.

So, why would an NBA player who already makes tens of millions of dollars go to all the trouble of selling off his contract as digital bonds—and how would it work?

The 90 securities-backed tokens, named “$SD8” coins, would allow Dinwiddie to collect $13.5 million of his contract value upfront as a business loan, according to an interview he gave Forbes. Each token will be tradable after a year and pay out 4.95 percent interest on a monthly basis (via the player’s bi-monthly paycheck), and it will fully pay out when it matures in 2023, a year after Dinwiddie’s current contract with Nets ends.

In his announcement video, Dinwiddie shed little light as to why exactly he wants to become the first professional athlete to turn “tokenize” his earnings, saying only that he is looking to “do some fun stuff with his contract.” But a look back at another celebrity may offer a hint. Back in 1997, rock legend David Bowie began selling Bowie Bonds, an asset-backed security that allowed investors to buy a share in 10 years of the singer’s royalties for much of his pre-1990 musical output. The bonds, which liquidated in 2007 without default, allowed Bowie to raise a $55 million lump sum, which he then used to buy songs of his that were owned by a previous manager. Like Bowie, Dinwiddie has said he will use the money raised from the sale of his bond as a business loan.

“It’s a very efficient way to very quickly raise a large amount of cash,” Andrew Hinkes, an attorney specializing in digital currency at Carlton Fields and an adjunct professor at NYU’s School of Law and Stern School of Business, told Robb Report. “It’s a classic story of time, value, money. Would you rather wait to have your money or would you rather have your money now and see if you can invest it in a way that ultimately benefits you?”

Less clear is why investors would want to invest in “$SD8” coins. Dinwiddie has said his tokens will be insulated from typical investment risk factors like market volatility and economic recession, and his representatives provided Forbes with charts showing that if all 90 of the coins are purchased, investors stand to earn $2 million over the next three years. Other analysts are less high on the bond. On last week’s episode of the Ringer’s “NBA Desktop” web series, CNBC’s Joshua Brown said, “Here’s who this is a great investment for: If you have huge capital gains and you owe taxes and you need a capital loss to offset that, this would be perfect for that.”

It is also unclear whether or not the bond has actually launched. Dinwiddie promised that investors would be able to buy shares starting last week, but as of press time, the DREAM Fan Shares website has no information on buying tokens aside from the initial announcement. And although Dinwiddie is active on social media, he has not posted about the venture since early last week. The company did not respond to Robb Report’s request for comment.

There might be a good reason for this relative silence, though. This time around, the league did not dismiss the proposal outright. “Spencer Dinwiddie’s advisors provided us with new information regarding a modified version of their digital token idea, which we are reviewing to determine whether the updated idea is permissible under league rules,” NBA spokesman Mike Bass told Robb Report in a statement.

The fact that the league is even reviewing the proposal may be a good sign for the Brooklyn guard. The NBA’s biggest concern about the original proposal appears to have been related to the third year of the player’s contract, which allows him to opt out and pursue a higher paying contract with the Nets or another team. Dinwiddie promised investors “significant dividends” if this happened. The league objected to that promise, reportedly viewing it as a form of gambling. That aspect of the plan has since been removed, which is why Dinwiddie believes he’ll be able to move forward.

If the league does ultimately approve the plan, Dinwiddie believes the bonds could be a model for the future. The point guard has made clear he thinks his peers will want to do the same, and the DREAM Fan Shares website says that the company is actively looking to sign up more athletes to try the strategy out.

Hinkes, for one, can can see other athletes following in Dinwiddie’s footsteps if the digital bonds deliver. “If this offering is successful—in that he’s able to raise the money he wants, the asset performs as expected and those who participate generally have a positive experience—I would not be surprised to see other explore this sort of investment and to try to innovate and add additional features to make these sort of investments attractive,” he said.