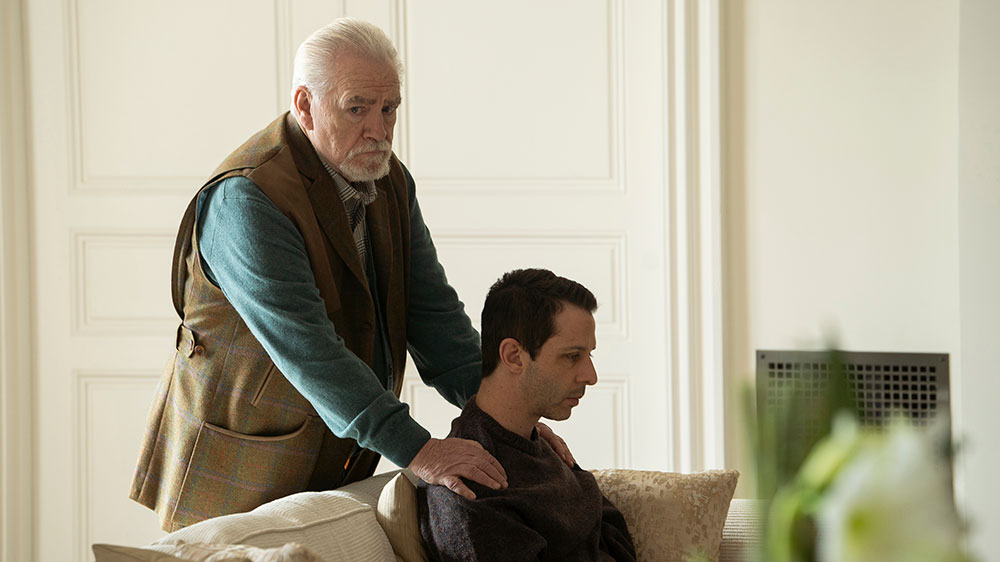 Welcome back Succession-ites! Thank the universe (and HBO) for bringing this show—one that puts the fun in family dysfunction—back for the dog days of August. Remember everything that happened in season one—the family infighting; the rivalries; the backstabbing, the cheating; and, oh yeah, the accidental murdering?

Well, we jump right back into the action at the start of season two.  Kendall—my poor, deeply broken Kendall—is drying out after his disastrous time at Shiv’s wedding. For those who don’t remember: He not only tried and failed to take on his father with a “bear hug” hostile takeover, he got completely blotto on drugs and managed to Chappaquiddick a young caterer. (Honestly, there’s just no better verb I can think of.) We find him in Iceland, soaking in a gorgeous hot spring. Unfortunately, after just 48 hours, Kendall learns he is getting yanked out before he can even get his get his silica mud treatment! He needs to go on television to explain to the world that it was a mistake in joining forces with slippery Stewie and Sandy, and that—as multiple people keep reminding  him—he needs to stay on message: His father’s plan is better.

There’s something about Iceland’s moon-like landscape with the smoke rising from the hot springs and the long Shining-ish winding roads that mirror the weirdness that is clearly at work within Kendall. He says quietly that he’ll do whatever his father wants and says uh-huh a lot as various minions put him through the paces while at the same time side-eye each other over his bodysnatcher-like energy and tell-tale nosebleed.

Kendall is so sad and broken inside he doesn’t even seem to care about flying private.  Photo: Peter Kramer/HBO

He’s groomed and put in an empty room with a fake background behind him. This news piece serves double duty as a nice bit of exposition reminding everyone what’s at stake here for Waystar Royco and family. Kendall has a bit of a rough start but manages to get out the message: “Dad’s plan is better.”

Around the globe, his siblings take note. Shiv, who has managed to get a sweet haircut somehow between her wedding and her honeymoon on a boat, thinks he looks like a sweaty corpse. Tom, of course, goes one farther: “Like an unshaven candle!”

Roman, somewhere in Asia, looks on with more concern. He and Shiv quickly confer on the phone: They thought Kendall was “benched”—why is he the go-to in a crisis? When Kendall is thrown the question of succession (drink!), he deftly jokes about what would happen to the bus that might hypothetically mow down Logan Roy.

“Ladies and Gentleman: the first f–king thing my son’s ever done right in his life,” says Logan Roy, resplendent in a chunky knit, from a conference room table in New York City.

Kendall arrives back in New York and finds that he can’t even arrange his own transportation: His father has assigned someone to motorcycle him around town. He’s taken right to Waystar HQ. Logan greets him as “Mr. Potato Head” and casually insults everyone in “the bunker.” War really makes some men feel alive, huh?

Logan Roy knows a lot about a lot of things but seems to especially know a lot about chunky knit cardigans.  Youtube

Logan debriefs Kendall, trying to figure out what Stewie and Sandy’s game plan is. Kendall manages to get through it. He even confesses that he told them about Logan’s medication, his erratic behavior (hitting his poor grandson; peeing on his office floor, you know, the usual). It takes Kendall all of 30 seconds of walking out his father’s office to ask about a drug hook-up, as his usual guy is unavailable. Kendall!

Logan is getting advice from his top serious-looking banker man that the best course to take would be to quietly concede to the sale. There are phrases thrown around like, “blood in the water” and a generally depressing case of media being dead. The wise thing to do is sell. Hmmm, does going quietly into that good night seem like something Logan might do?

Apparently—yes? Even his children can’t imagine this to be true as they get texts to their various locations.

Greg the Egg goes to see Kendall, who is haunting around in a mostly empty gigantic apartment. Kendall explains that due to Fashion Week all the good penthouses are gone. He’s tasked Greg with getting him drugs and Greg, bless him, brings him—ewwwww, dude—“park coke.” Spoiler alert: Park coke is not good coke. The Roys might not agree on much, but they sure do all love batting Greg around like a cat toy.

The word goes out: The family has been summoned to the Hamptons and the Roy “Summer Palace,” title of tonight’s episode. This is fitting as calling it a summer place would not be doing it justice. Look at those privacy hedges! Look at the perfectly neutral-toned stones that line the driveway! Look at the size of this @$#$#%@% house!

The staff hurriedly tries to make it hospitable—the linens, the lobsters, the good cuts of beef—but Kendall, who arrives first, locates a problem. Something has gone rotten in the House of Roy and this time, this is no metaphor. Or if it is, it’s crossed over to a literal problem: The house stinks.

The family arrives and Shiv and Roman take a walk to escape the smell—he is the only character to take note of her rather drastic haircut—and slip out to the water. They wonder if their father is going to murder Kendall, or if he will make Roman his successor. She congratulates him for his good positioning and he shoots her a look, because if the Roy kids know anything, it’s that every conversation is an opportunity for mind games and maneuvering. Shiv—living up to her weapon-y name—drops a few trigger words to wind Roman up. See how fun family is?!

While hunting out the root of the smell, Logan attempts to have a father-son chat with Kendall, whom—I don’t care what anyone says!—he seems to be legitimately fond of. Marcia, too—she tells him out of difficult times come strong men, which sounds way better in her accent. Logan’s security goon assures Kendall that so far no one has any idea he was in the car during the accident at the wedding. We do learn the grisly detail that the poor, doomed waiter did survive the crash as he unhooked his seat belt but died a watery death.

Kendall walks out and encounters his siblings, who circle him warily. When confronted by why Kendall pulled out of the hostile takeover, he falls back on the PR message: Dad’s plan was better. Shiv isn’t having it—he couldn’t have done this on a different day than her wedding? Though: I think we all know she could give two figs about her wedding. But the girl is a Roy and likes to fight! But Kendall has no fight to give which infuriates his family more.

Even Marcia wants to know if Logan is really going to sell. This is surprising because, up to this point, I’ve always assumed that it’s Marcia who’s in the inner circle, right? What if there is no inner circle? He says he doesn’t know what to do and Marcia spits back that if he’s old and weak maybe he should sell. Yikes.

Great news: The source of the smell has been located—a rotting dead raccoon covered in maggots has been retrieved from a chimney. Take from that what you will. Logan, predictably, loses it and orders the staff to toss the fine food and order pizza and goes stomping off to look for a contractor to blame.

And now it’s time for another totally exhausting Roy family meal! In this one, a game of familial chess is being played out in regards to Logan selling the company. It all boils down to—yes, you guessed it—who might be Logan’s successor. (Drink!)

Gerri’s face speaks for all of us: What is Roman doing?  Photo: Peter Kramer/HBO

Old wounds are discussed—apparently Roman got beaten with a slipper in Gstaad for ordering the lobster (just sit with that one for a bit)—and no one seems to understand why Kendall is being so easily brought back into the inner sanctum. Logan puts it to the family: stick or sell? If they cash out, they could walk away with $10 billion. He takes his kids on—one on one.

Roman goes first—he has a pitch. He says a lot of words I’m not following but the gist is he’d take over and together they could rule the world. Logan looks less than thrilled.

Outside Tom compares the situation to playing Gin Rummy with Zeus. Shiv likens it more to King Solomon and the baby. Tom wonders who might be tapped—surely not Kendall, not Roman…You can see the wheels in his brain start to turn. Could it be him?

But of course, everyone has been missing what has been clear all along: It’s always really been Shiv who is the natural successor to Logan Roy. She’s the most like him, especially when it comes to steely ruthlessness.

She plays it perfectly: She feigns nonchalance and tells him to go ahead and sell it. But when pressed, she has a clear and detailed plan about what to sell and what to burn.

He formally asks her to be the one to take over. You can watch the amazing Sarah Snook’s face struggle with conflict—a little girl’s happiness in finally being taken seriously by her father versus the strong, flinty woman she’s grown into, terrified of somehow being made a fool. Logan continually assures her that unless she comes in, he will sell. She finally says that yes, of course she wants it. Oh, and her face. “Is this real,” she says, in tears. Yes, he says. Remember this moment. Of course, this father-daughter sweetness is indeed just a moment as she gets down to business: They need to tread carefully and consider the choreography of this announcement.

Her husband is just one of the many who underestimate her: When she emerges from the study, Tom just wants to know what Shiv has landed him—and she tosses him Chair of Global News at their Fox-like network, ATN. Tom is very excited and Shiv doesn’t tell him anything else. It’s the Roy way. Embroider that on your family crest!

Logan announces to his family that they are not selling. Instead they’ll be the largest media company in the world! Kendall and Roman will be co-chief officers and Connor asks about succession (drink!), which Logan waves off airily. Shiv’s face registers a briefly passing moment of concern.

Logan takes Kendall to confront Stewie. And honestly, Stewie is pissed—Kendall is acting like a shell of his former self, but also, let’s be honest: Stewie suuuuucks. However, I’ll give him this: He tells Kendall there’s a friend card to play if he wants it. And I think I believe he’s truly concerned about what might have happened to send Kendall back into Logan’s arms?

Kendall sticks to the one phrase he’s been clinging to this whole episode—dad’s plan is better—and Stewie explodes. He takes Kendall to Sandy, and Kendall tells them what we of course knew, deep in our guts: Logan Roy will die before ceding control, he’ll get as biblical and vengeful as he needs to. Sandy is unfazed. Let the war begin.