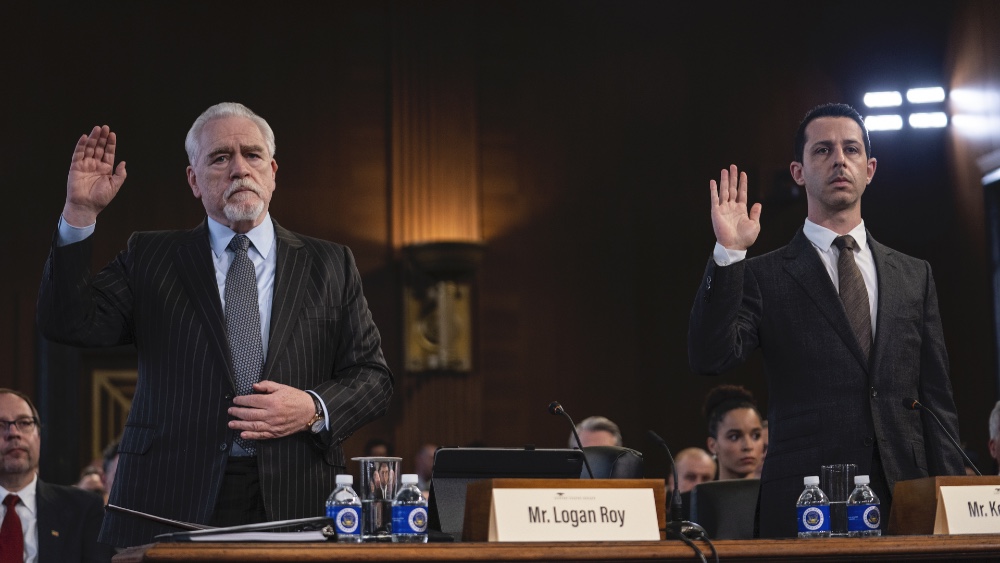 Look at these Roys swearing to tell the truth!

We open with a very pensive Logan taking a gloomy stroll. Why so glum, buddy? We soon learn why: The allegations and investigations of Waystar are all over the news, and the Roy gang has gathered to watch and heckle a 60 Minutes-like program that has an interview with the Waystar whistleblower a.k.a. The Weasel. (Clearly this episode was written before we all had to come to terms with how to stylize the word “whistleblower.”)

Turns out, The Weasel is pretty compelling TV. He lays out how the company has spent millions covering up Uncle Mo’s misdoings, possible death cover-ups, shadow logs and the charming and totally believable acronym NRPI—No Real People Involved. Lovely.

Logan is hopping mad and wildly accusing Sandy of backing the whole thing. Everyone looks a different shade of sickly worried. Everyone agrees that everything is really bad. And, to be clear: really really bad.

Gerri thinks they should say senior management knew nothing and they throw dead Mo and Bill (Tom’s old boss) completely under the bus. And boy oh boy is it chilling to watch a group of people collectively decide to try to ruin someone they all like.

Greg tells Tom and Connor he just turned down a quarter of a billion dollars, since he has decided that Uncle Fun, Logan, is the way to go with his future. Even Connor is like, uh, that seems unwise. Greg is all, it’s cool I’m going to get five million when he dies. And then comes some talk about how you can’t even do anything with five million anyway. (I, for one, am blocking this conversation out immediately.)

There is definitely spin-off potential for a Connor/Gregory presidential race sitcom.

Tom and Shiv jump into the strategy session, and she has news: There are going to be hearings. Well, that gets everyone’s attention. Logan loses it. They all start squabbling about who is going to testify, what they are going to say, etc.

Logan pulls Roman outside and tells him he needs his help. He thinks this could go really badly for Waystar, and the family, between Congress being involved and the shareholders getting spooked. He needs Roman to go track down that sweet foreign investment money, from Eduard, the co-owner of the wrong Scottish football team. Logan thinks the money can give them a time out from the responsibilities of a being a public company. Poor Roman is nervous being the one with this responsibility and Logan pulls out his sweet Daddy card and tells his son he knows that Roman has a gift of getting people to like him. None of his kids can withstand a touch of parental love! Roman is in.

He even goes so far as to ask if Logan has someone to talk to. Like, for example, Marcia? A shrink? You can imagine how that goes over. Roman leaves as Rhea arrives. She’s not thrilled she’s agreed to be the CEO of a dumpster fire pirate death ship.

No one can resist the Dad Hands Of Love.

He tries to downplay everything. She is like, well, I’m screwed now. Right on cue Shiv shows up to smile sweetly and tell Rhea she can’t think of anyone better to see the company through this mess. Haha: That was fun. Rhea addresses the troops and puts on a cheery face and tells them all will be okay. Nobody believes this, including her.

Roman boards yet another private plane to meet up with Eduard who is watching The Hearts (or is The Hibbs?) practice. He tells him straight up: They want him and his father to take them private. Even Roman is surprised by a very fast yes. Eduard suggests that they all go to Turkey the next day to talk to his father directly. Laird offers to give Roman a quick tutorial on a lot of the foreign factors, and he looks as surprised as me when Roman tosses off enough words to let us know he’s been studying.

They make it to Turkey and Roman, bless him, pitches his little heart out. But uh-oh, very quickly a quiet yet very menacing encounter with some armed gentleman. Bottom line, Eduard tells Roman they gotta go with these guys, and no, Dave his security guard can’t come. Neither can their phones. Yikes.

Are they watching the Hearts or the Hibbs?

They’re taken downstairs to where many hotel guests are being held. Eduard tries to assure them this is just administrative action function. Roman points out that this also involves guns and Americans don’t tend to do well in moments like these.

We move locations to DC., where a grim Logan in shades passes all the protestors outside calling it Rapestar S–tco (which is funny, come on). When they’re inside, Tom and everyone else is horrified to see that Bill is there. It’s like naming the lobsters in the tank, you can’t kill ‘em once you’ve seen them! Everyone exchanges pleasantries. Bill says he’s just there as a symbol of support (which I don’t believe, I think Bill knows exactly what he’s doing). “Adios Bill,” says Gerri. And there we have it. Everyone gathers in a sweaty room off the main to watch Tom and Gerri’s testimony. He’s very nervous. And so am I when they walk in! (The committee is called to order.)

Guess who is first up on questioning. It’s Gil! He dryly says he hopes he’s saying Tom’s name right (pretending like he didn’t attend his wedding!) and then it quickly goes bad. Tom can’t even get through why they called Mo “Mo.” And let’s just say they have receipts. Tom unravels even more quickly and in the viewing room, the posture of the assembled group reads: yikes.

Is this your first time realizing that when these two are together they are Tom and Gerri?

And things get worse: Those season one boxes that Tom tried to get rid of are quickly coming to the forefront. And guess what? They know that it was Greg who signed them out. Oh boy. When Gil asks if Greg is someone he knows, hilariously Tom says no. He quickly changes his answer. We also learn that Tom sent the same email to Greg—you can’t make a Tomlet without breaking some Gregs—67 times! He’s also asked about his human footstool practices.

Everyone knows he blew it and big time but when he comes back in they all reassure him. He freaks out and accuses Shiv of using him as a patsy. (Not a bad theory.) Greg comes back to freak out as well. He thinks he turned down a quarter of a billion dollars just to go to jail. Logan barks for him to go outside.

Kendall asks Shiv if she can use her connections to find out what’s coming down the pike. What a sh–tshow, says Logan. True.

Shiv goes to Gil’s office, where he’s with handsome ex-affair partner, Nate. She says she can offer Gil a favor. She tells him the Weasel isn’t so squeaky clean; they’ve done their research. Gil doesn’t care. Shiv is like, go for Bill and we’ll fold. But Gil and Nate are smug: They have someone better than the Weasel.

She runs back to the war room to let them know that the opposition has a victim ready to testify. This is very bad news for Waystar. Rhea arrives and Logan asks if she can go talk to the victim, see if they can figure out what she wants. Rhea’s face makes it clear this is not really the kind of thing that Nan Pierce had her doing. They try to prep Logan, and he is not seemingly in the right frame of mind. Kendall can’t help but smile a little when he sees Naomi Pierce slip into an audience row.

Logan reads a statement blah blah blah he knew nothing. Gil starts to attack Logan and Kendall jumps in with a snappy report. Gil keeps hammering at Logan. Logan, amazingly, throws to Kendall. And Kendall is fantastic! Where has this Kendall been this whole time! He turns it around on Gil and his vendetta of Logan. Things turn towards the positive. Another senator tells them how much they’d like to have a drink with them.

Roman is taking being a hostage pretty calmly, all things considered.  Screengrab

Back in Turkey, Roman is staying calm but is not happy. He tries to play a game of M/F/K with Laird using the members of the executive floor. Roman acts incredulous when Laird says he’d marry Gerri. Carl has a panic attack. Eduard comes over and tries to reassure them all that everything is fine. Roman wants to know if they’re going to get shot. Amazingly, the deal can keep going!

But first, the foreigners have to raise their hands. Roman is called specifically out and told to follow a man.

Shiv and Rhea take a car ride to intimidate a victim. Rhea is unhappy. She isn’t going to go ahead and talk to the witness. She tells Shiv she doesn’t even need to do it. Shiv corrects her: She does have to. This is her family. And then we get to watch Shiv be a real Roy. She manages to ingratiate herself with the victim, despite a lot of the victim’s reasonable protestations. Hell, even I believe her! Man, is Shiv good.

Look at our girl go.  Screengrab

Post testimonials, there’s a celebratory vibe going. A round of applause greets Logan. Logan goes to Shiv and thanks her and tells her she did well, since the star witness has dropped out. But first, Rhea is waiting for him outside. She asks him to tell her the truth. Logan is still doing that blustery thing but admits it goes a long way back and, you know, things were different. She asks if Mo was a friend of his? She’s like, you told me that. She says it’s a superpower to be able to lie to someone’s face. She’s like, I’m out. He can’t believe it! He asks her to stay. He then calls her fungible.

He and Shiv watch their news network spin their story and talk about Rhea being gone. He’s able to level with his daughter: they are in deep trouble, even with the holes being somewhat fixed today. He tells her that Bill isn’t enough to throw to the wolves anymore, they need a blood sacrifice. We end with both Shiv and myself wondering just who it is that Logan is thinking of. And, um, is Roman ok?