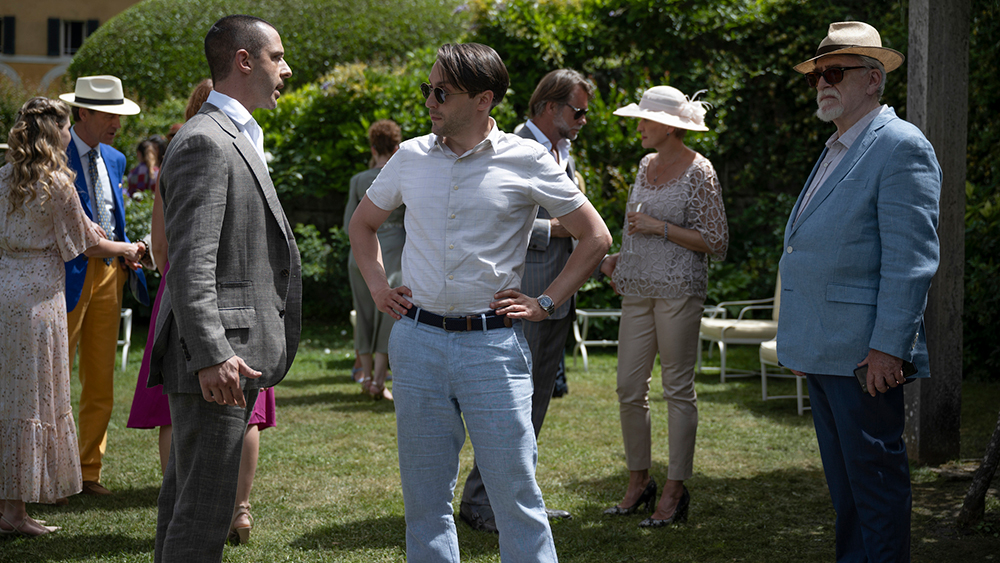 Cliffhangers are a storytelling tradition that date back all the way to medieval folk tales, when the term was sometimes literal, with characters hanging from cliffs at a chapter’s end. But after this penultimate episode of Succession‘s third season, I propose we update the name of the device:

With the season three finish line in sight, we have a nearly complete view of a rather unexpected set of episodes. The end of season two—and the front third of season three—promised existential threats for the Roys. The DOJ is coming! The DOJ is coming! But what we’ve gotten instead—perhaps due to the universal scaling back that Covid forced upon all productions—is a doubling down on the internal tensions.

And that has seemingly split the audience reception of the season. The same focus on the family that drummed up feelings of wheel-spinning on the show’s part also delivered the incredible sibling chamber piece in “Mass in Time of War” and the stunning birthday party setpiece at the heart of last week’s hour.

(I’m still not over Kendall scrapping the Tiny Wu-Tang Clan performance, but that’s another issue.)

As we come to the conclusion of this more intimate season, we’re beginning to see the terminus of character arcs and ultimately what kind of story the writers hoped to tell—and it’s not that of an evil company getting a taste of justice. This show is set in the real world, after all.

The episode begins in the immediate wake of Kendall’s birthday party. Roman and the company are riding high at the impending acquisition of killer streaming app Gojo, while both Shiv and Kendall phone into the board meeting with purported illnesses—though Kendall would very much like to dispute that. The meeting is a fine example of how diminished the perceived threats from season two have become, as Sandi and Stewy express their frustration about not being inside dealmaking but ultimately stand aside because of the acquisition’s upsides.

Sandi doesn’t like being ambushed, but she and Stewy don’t mind the Gojo deal.  Photo: Macall Polay/HBO

But all of this business is a short (and oddly disconnected) prelude to the main course of the episode, the nuptials of Lady Caroline Collingwood and Lord Fucking Seatsniffer of Pantyhoes a.k.a. Peter Munion. The family is off to Tuscany, where it’s all cyprus trees and shallow-buried resentment.

Roman decides to kick off the festivities with a ratfuck of his stepdad-to-be. It turns out that Peter Munion is pretty slimy, with an untold number of children and bankruptcies. “The guy is clearly on the make,” says Roman, who’s trying to convince Shiv to join him in talking their mother out of her impending marriage. She’s not interested, nor does she want to become Roman’s sexy secretary when he takes over the company.

It’s been interesting to watch as Roman’s usually perversion evolve over the course of this season. Gerri may have nailed it when she quickly diagnosed Roman outside her room, out of earshot of Laurie. She thinks that his heightened Roman-ness is a result of the Gojo deal and the greater stress that has come with it. I’d say “stress” is less accurate than “ego.” His successful endorsement of Jeryd Mencken (What’s going on with that storyline? Does the show remember that just happened?) and his parlance with Matsson at Kendall’s party have turned Roman into the worst version of himself. He’s received nothing but positive reinforcement for some really toxic behaviors.

But not to worry. He’s about to get a whole lot of negative feedback.

Kendall is in Tuscany as well, and he’s brought a new hair cut. Also his kids. (Where the fuck are they?) Since his rather extreme emotional comedown at his birthday party, he’s decided to strip down. His hair is gone, and so is his swagger. He’s still very much Kendall, and when his mom asks him to divvy up events with his dad, it seems to set his resolve. He wants to finish it. All of the fighting with the family, the war of attrition with Logan, he wants it nailed. “Maybe wear a stab vest,” suggest Roman, after Pops seems like he’s considering Kendall’s dinner invitation. But that’s the crack of someone who has no idea (or a single care) about the things his brother is struggling with.

Roman has concerns far outside of his brother’s wellbeing. Matsson is tweeting like Elon Musk, sending the price of Gojo up with little more than a few emojis and a Snapchat filter. As the terms of the acquisition continue to get hammered out, Waystar-Royco is getting to see what kind of person they’ve gotten into business with. Because of the nature of the tweets, they can’t be really sure what any of it means, though. It’s no wonder that Matsson and Roman formed a bond. No one observing them can put any concrete reason to the things they do. That would likely take someone with a license, expert training, and an hourly rate.

The episode also contained two instances of journalists digging where the Roys might not want them to—well, where some of the Roys might not want them to. Comfry, before kissing Greg against all better judgment, informs Kendall that two former Globe journalists are starting a podcast digging into the curse of the Roys, including Logan’s sister Rose, Connor’s mom, and a poor waiter who died after being bullied at Shiv and Tom’s wedding. It’s the first explicit reference to the death in a season peppered with ominous nods in that direction. The incident has quietly loomed over Kendall’s campaign against the company as a possible nuclear option for Logan. What is Kendall thinking when he says to keep tabs on the offer? Will he be around to see it through?

The other line of inquiry seems obvious in hindsight. Someone from Politico is asking about Willa’s employment history. It’s a scandal that would make Connor’s poll number plummet from one to zero. Willa ever so selflessly suggests taking their relationship back underground. She’d have her own apartment in the city again and still maintain the flow of cash from Connor. But he has another idea. Marriage! Of course, she has to “give it a think,” and when the episode ends, there isn’t a definitive answer from Willa. But this relationship was always heading here, wasn’t it? Connor, without knowing it, is forcing the endgame of this arrangement. How much discomfort will Willa subject herself to in order to keep her comfort?

Also asking herself tough questions is Shiv, who managed to withstand a conversation with her mom for three minutes before having a near-complete meltdown. Her mom says that Shiv has more culpability in their relationship than she wants to admit and sums up her dad succinctly. Logan “never had anything he didn’t kick to see if it would come back.” Shiv completely misses the point and decides to try even harder to get daddy’s approval, which mostly amounts to some too on-the-nose dirty talk with Tom as they try to conceive a child. The uncomfortable exchange leads to an all-time Wambsgans line: “Sometimes I think, should I maybe listen to the things you say directly in my face when we’re at our most intimate?”

Not satisfied with a toxic mother-daughter conversation, the hour also featured a climactic showdown between father and son, with bonus food testing on a child. The fallout from too much birthday has cleared Kendall’s head, and now he wants to cash in the offer Roman passed along. Kendall wants out—all the way out. He thought he was a knight on horseback, but he’s not. That’s not how life works, Logan tells him. Life is “a fight for a knife in the mud.” And no, Kendall won’t be getting $2 billion. That offer was just “for fun.” Then conversation turns to whether Logan is evil. Kendall says yes, but Logan—shockingly—says no. He is “a revolutionary.” And following the arc of all tough Roy conversations, Logan goes ugly. “How long was that kid alive, before he started sucking in water?” he asks. It’s absolutely brutal. Kendall may not be the good person he believes he is, but he is certainly not his father. Few people are.

What would seem like the conclusion of the episode comes after Roman takes a trip to Matsson’s place in Italy, which he can’t sleep in because he needs the best of everything. The Gojo giant thinks that he may not be getting the best out of the Waystar deal, and a path forward emerges. He’s suggesting a merger of equals. The proposition seems ridiculous at first (mainly to Shiv), but the more Roman pitches it to Logan, the more it begins to make sense. After all, Gerri does predict that without some kind of union between Waystar and Gojo, the former will become someone’s lunch.

So Roman mostly sells Logan on the idea of a merger, and to cap off the business victory, he attempts to send a dick pic to Gerri. I say attempts because it ends up going to Logan.

It needs to be stated that, no, this is not how Messages works. The photo added to a draft of a Gerri text would not move over to a Logan conversation. With that technicality out of the way, OH MY GOD. Wow. A truly rattling dick pic. Logan flips, and Shiv sees her opportunity. She tells her dad that this could be a liability and begins pushing Gerri toward a formal complaint. This could have major organizational repercussions, but really, we just have to talk about the pool.

Left alone by his kids, Kendall ends the episode by passing out face down in the pool. Is he dead? Is this the poetic end for a man who left a kid to drown in a pond? In short, I don’t think so. He’s still breathing moments before the credits roll, so if he dies, we probably haven’t seen it happen just yet. There is the dangling thread of the Roy curse podcast, but that could be an easily planted red herring. Who’s to say?

Even the most analytic of reads can’t keep me from desperately needing next week’s finale and learning what exactly did (or did not) just happen.