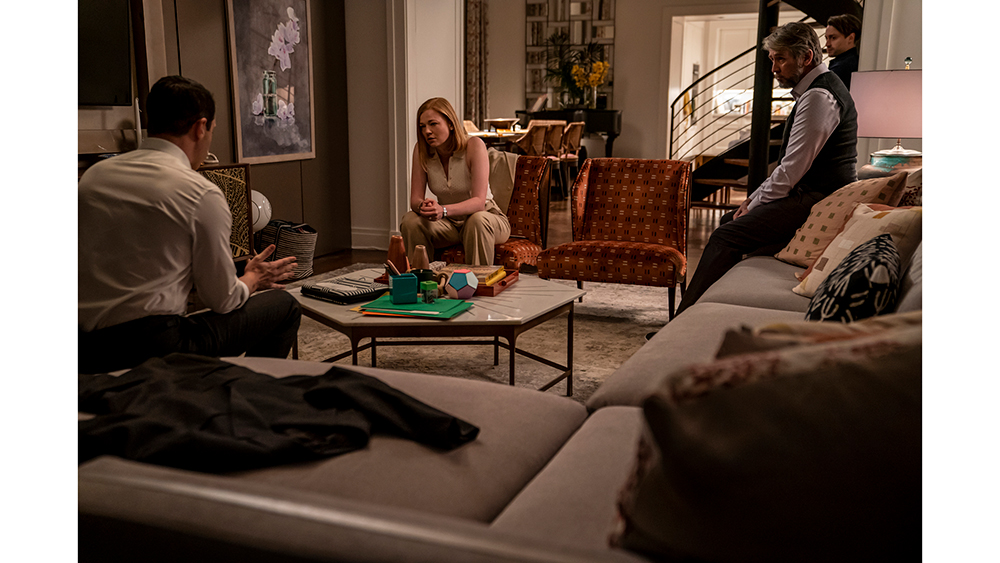 Kendall makes his pitch to Shiv, Connor and Roman.

Last week’s premiere ended with a clear declaration of war by Logan Roy against his former No. 1 Boy, Kendall, and in week two, it’s time to seal off the exits, baton down the hatches, call your estranged (and strangely powerful) wife, and talk strategy.

A theme of this episode, entitled “Mass in Time of War,” focused on the importance of family. But since this is Succession and we’re talking about the Roys, the full theme is “the importance of family, mostly in terms of optics when it comes to internal wars, but also some misguided sense of loyalty to a man who’d feed you to the wolves if it would bolster shareholder confidence and fend off Sandy and Stewy for a bit longer.”

All of which is to say that with war declared between Kendall and Logan, it’s time for the rest of the gang to pick a side and decide where their loyalties lie. The central drama of the episode—and most likely the “mass” that’s referenced in the title—is a gathering of the Roy children at Rava’s place, and here we see the writers room really flexing their dramatic muscles. The conversations among the four adult children is probably the closest that the show has ever come to filming a play, and it made for such a compelling watch. It’s a credit to how well established these characters are by now and how precisely they can push each others’ buttons.

“No one talks to the snake.” That’s the blanket order from Logan, still hanging out in the Days Inn Sarajevo. But naturally, everyone has to at least listen to Kendall’s pitch—without making it seem like they’re listening to Kendall’s pitch.

Shiv, fresh from the news that she lost the top job to Gerri, goes dark and heads to Rava’s, where she’s promptly spotted by Greg. All of Kendall’s sibling give different reasons for why they’re actually coming over, and Shiv’s is to talk him out of his assault on the company. But what really compels her is what has motivated her since the season two premiere: the dream of being CEO and chairman, the ultimate form of affirmation within the company and the family.

And Kendall knows exactly how to engage with that dream. “You’re the one I want,” he tells her shortly after she arrives. And though she explicitly says that she’s not there to cozy up, her interest is as palpable as her desperation was last week when talking to her supposed friend Lisa. Kendall’s pitch is simple, and it builds on the self-righteous streak he debuted in last week’s premiere. “You tell yourself your a good person, but you’re not a good person,” he tells her. “Right now, I’m the real you.”

You get the feeling Roman really does like it when Gerri threatens him.  Photo: Macall Polay/HBO

Shiv understandably calls bullshit, but she’s thinking this could be her only shot at CEO. She tells Tom as much during their second secret phone call, but I would like to take a moment to discuss their first talk—the one about love. Shiv says “I love you.” Tom says “Thank you” and wants to know why it’s important that he say it back to Shiv. “You can’t just take my love and bank it, then take a view of the love market and see if you want to invest in me,” he tells her. Even while they’re not talking about everything that’s gone down between them, I’ve thoroughly enjoyed them trying to skate around it.

On the topic of strained marriages, is that Marcia’s music?! “Those fucking kids of yours!” she declares as she arrives in Sarajevo. Logan thinks an estrangement won’t play well during a contested investors meeting, and it’s time to set things right. Marcia and her lawyer have some very specific ideas how that can be accomplished. She wants her place in the trust restored, as well as the future of her children secured and an amount of money that’s actually quite reasonable if you consider the context.

Already, the business Voltron that is Logan Roy is beginning to reform.

Possibly the most intriguing dilemma any of the Roys face here belongs to Roman—and it has nothing to do with Kendall and his offer. The rise of Gerri to CEO last episode was, on its surface, a win for the hot little maniac, but a call from Pops early in the episode complicates things. “Keep Gerri close,” Logan tells him. He’s to spy on the new CEO and make sure that she doesn’t do anything that could compromise the former CEO’s inevitable return to power. Roman agrees, but it puts him in a deliciously bad bind. His dad, whom he has been more or less unfailingly loyal to and who very recently passed him over for the top spot, wants Roman, whose primary internal dynamic is his inability to reveal himself to anyone on an emotional level, to betray Gerri, the one person with whom he’s formed an honest connection.

It’s a tough turn for Roman that will be fascinating to watch play out, especially with Gerri (so cute taking photos of the TV) twisting the knife in his side by considering his advice when he suggests forming an executive counsel—no doubt something dad wants—and offering mentorship. After Kendall makes his pitch, Roman shows that he’s still willing to put a huge amount of trust in Gerri by telling her exactly where he is and what he’s doing. She ultimately gives him the insight that fully closes the door on the possibility of a collab between him and Kendall—that a four-way Roy zapping of Logan doesn’t result in any of them ascending.

Yes, Gerri’s read of the situation is highly advantageous to her and her goals of keeping Roman by her side, but she makes a good point. It’s very possible that all Kendall has done with his big move is assure that no Roy ends up atop Waystar Royco. But who would that leave then?

The most important thing to consider about Greg’s role in all of this is that he isn’t a part of any of this necessarily. For all of his uncertainty about whether he picks a lawyer or whether a lawyer picks him, Greg might be the person who makes everything—the company, the Roys, and their various schemes—come crashing down. (A quick aside: My pet theory since the beginning of the show is that Greg will be the character who winds up at the top when all is said and done with the series. Nothing in this episode has dissuaded me from that position.) Afraid that he’s got his dick attached to a runaway train, Greg decides that he should get a lawyer, and Ewan is willing to provide one. (Another quick aside: I briefly transformed into an emotional seven-year-old hearing James Cromwell call back to his iconic Babe line “That’ll do” when Greg tries to hug him.) Gramps does set Greg up with a lawyer, but one eager to take on Waystar-Royco in the way that Kendall only tells himself he is.

Ewan sets up Greg with a lawyer. And then some.  Macall Polay

The gathering of the Roy children inside the bedroom of Kendall’s daughter, whose name he kind of forgets for a moment, is one of the most dramatically dynamic sequences that the show has given us so far. Kendall’s main argument is a moral one. This takeover is the right thing to do, and the importance of it is compounded by what he believes is their complicity in the company’s crimes. Connor agrees. Shiv and Roman do not. How much deniability can any of them really lay claim to? It’s a fundamental moral question for these characters, framed by a choice of whether they should take over a company and enrich themselves in the process.

And of course, Kendall is making this argument and simultaneously hiding his conversations with Sandy (father), Sandy (daughter), and Stewy. The secret meeting is just an appetizer for Kendall’s implosion once everyone walks out on him, showing how hollow all of his philosophizing really is. He simply wants people on his side. He wants his family to choose him more than anything, even going as far as prioritizing the pitch to them over Lisa’s warning about a potential FBI raid. And when it blows up in his face—thanks in no small part to a box of donuts from Logan—he shows exactly how small and sad he really is.

The episode ends on a foreboding note with the return of Logan Roy to the US and Shiv’s seeming rise to president. Gerri is still in place as a figurehead and potential sacrificial lamb, ready to absorb any nuclear radiation that this war may bring the company’s way. There was also a subtle reference on Marcia’s part—I believe—to the potentially devastating information Logan has involving Kendall and one very unfortunate wedding waiter. Logan says “You drop some bombs, you get burnt, too, you know?” suggesting that the murder he helped cover up might be too spicy of a meatball even for the Full Fucking Beast, but I have a hard time believing that this water-logged shoe won’t drop at some point in the near future.

Lots of threads unresolved and questions to answer. But as we stare down the barrel of another week of theorizing and waiting, one question still haunts me. What did Connor see in those geological surveys, and where will he store his fine wines now?