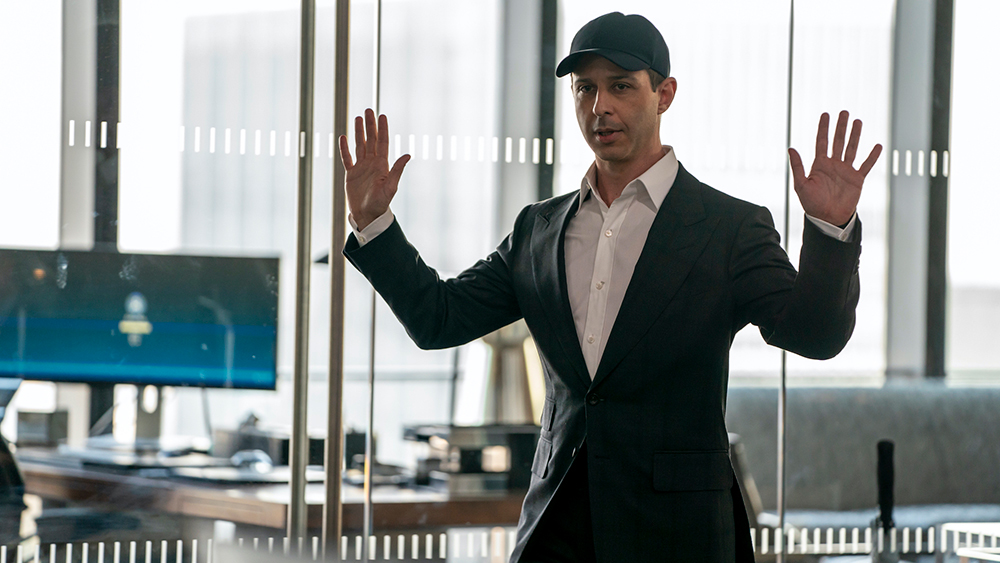 Kendall’s moves against his dad are a lot of things. Desperate, delusionally self-righteous, motivated by personal grievances, childish, pathetic.

After last week’s blowup in which he labeled Connor, Shiv, and Roman, “irrelevant,” “a twat,” and “a fucking moron,” respectively,” Kendall has quickly bounced back by talking about how great his headspace is. He’s speaking with a journalist over lunch, and he’s really happy in his headspace. Nothing bothers this guy, the noble warrior fighting the patriarchy. Not his siblings choosing dad over him, and definitely not the new monologue by Sophie Iwobi, the host of The Disruption with Sophie Iwobi (impeccably played by Ziwe Fumudoh). “It’s funny,” he says. “And it doesn’t hurt because it’s not who I am.” This guy is really out here cosplaying as someone with pure intentions, someone with such a firm belief in his actions and morals that his sense of self can’t be shaken. He can totally take a joke. That’s how he’s supposed to be.

We get our first look at Waystar-Royco with Gerri Kellman as C(wink)E(wink)O(wink) and Shiv Roy as president. All it really boils down to is “Logan still calls the shots.” “Let’s hope our active CEO isn’t getting too active,” he tells Karl. After Gerri’s plan to sell off one of the company’s Israeli outfits off is scuttled by Logan, the FBI brings up the next agenda item. The Bureau wants to know if the corporation will accept service of a document subpoena. Gerri portentously warns that a warrant could come quickly if they don’t accept service, but Logan is steadfast. “Tell them to ‘fuck off,'” he orders, and I think it’s safe to say that the FBI didn’t appreciate his tone.

No one will be surprised if Gerri has some plans of her own.  Photo: Macall Polay/HBO

The former head of cruises is excruciatingly aware of the FBI’s breath down the company’s neck, but also Greg’s breath, which is apparently very bad. “DOJ is coming in like a combine harvester in a wheat field of dicks,” Tom tells Greg in the latter’s brand new “not very nice” office, which is by no means a punishment for playing both sides, hanging out with Kendall, and finding his own lawyer. But the Tomelette is actually taking that page from Greg’s book and getting an outside legal opinion about how much trouble he (hypothetically) might be in.

As he reveals to Shiv later in the episode, a hypothetical John Doe at the head of cruises is a very likely candidate for some prison time. The news hits the non-hypothetical Tom hard. It’s alarming, but not nearly as alarming as the reminder that Shiv and Tom have a dog named Mondale. Is there any chance that this dog is being properly cared for? I mean, I know they have the means to pay someone to walk and feed him, but what about love? What about belly rubs? Is Mondale the most sympathetic character on this show, it’s true victim?

Who wants to play a round of Good Tweet-Bad Tweet? On his way to a journalism benefit dinner, Kendall sticks his hand into the fire to prove how much it doesn’t burn him with his favorite new game, in which passengers in his limo alternate reading off positive and negative tweets. It’s all fun until someone on the internet speaks too plainly, chalking up his moral crusade as nothing more than the product of mental health and addiction issues. (Well, yeah…)

Inside the dinner, things don’t get much cheerier. Shiv is in attendance to speak with Kendall and pitch him on the concept of “change from the inside,” but first, she has to fend off Nate, who is presumably on a break from filming The Lost Symbol. Once Kendall arrives, Shiv lays out the actual stakes for what he’s doing. The share holder vote is coming up in the next week or so, and the family is at risk of losing control to Sandy and Stewy. Could Kendall just hold off on the attacks and maybe not come into the office like he’s threatening to do? His answer is a firm “maybe idk,” but he’d also like to apologize for his comments at Rava’s. He doesn’t specify which comments, but it’s safe to presume it’s the ones involving “teets.”

Failing to rein Kendall in, Shiv returns to Logan’s and would like to know how atrocious his reported atrocities are. He, of course, doesn’t want his daughter to know too much. Gerri can get mucked up with details, but Shiv needs to be clean. “You will not find a piece of paper that makes you ashamed of me,” Logan assures her, but does anyone really believe that? Ultimately, he’s asking Shiv for her faith—faith that none of this “hullabaloo” is actually that bad and faith that he knows the best way through it. “The law is people, and people is politics,” he says. “And I can handle the people.” But considering how the episode ends, can he? So far, a common motif running through season three is these characters being confronted about the lies inherent to their self-images.

But not everyone is deluding themselves. Tom is taking quite a sober look at his prospects, and since they don’t look good, he’s wondering what the best version of this bad situation is. His crazy idea is accepting his probable fate and using it to score points with Logan. If he knows that jail is likely, at the very least he can make it seem like he’s doing the noble thing by going down. Shiv rejects the idea at first, but the more she thinks about it, the more it makes sense. She reasons that such a posture would work with Logan and that it’s incredibly unlikely that anyone goes to jail at all. The first part bears out when Tom makes the offer to his father-in-law. “I won’t wriggle,” he says. “Just clunk the trout on the head and put it in your pouch.” And yet I can’t shake the feeling that Tom is going to get clunked.

Tom agrees to play “clunked trout” and take the fall if necessary. Will it play with Logan?  Photo: Macall Polay/HBO

After some careful thought and consideration, Kendall decides that he’s going to go into work. Since he’s technically still an employee and firing him would be a gift to the Department of Justice, Ken—in theory—should have no trouble strolling into Waystar ahead of Shiv’s big townhall, but everyone freaks out, including Lisa, who hasn’t been able to lock down an immunity deal yet. And while he is let into the building, Logan, et al, do everything they can to ice him out, including turning the thermostat down to a frosty 65. One truly chilling moment is when one of Logan’s guys—Colin, who debriefed Kendall on the investigation into the drowned wedding waiter—appears inside Kendall’s office like a Shakespearean ghost. “I know you,” he says. This might be the closest Succession ever comes to a Halloween episode, and I love it.

It’s time for President Shiv Roy to take her rightful place: parroting back focus-grouped taglines to pissed-off employees. (She gets it.) This should be the moment that she gets everything she has ever wanted—finally the chosen child—but Kendall has other plans. He has speakers planted throughout the space and blares “Rape Me” by Nirvana, showing off the show’s music licensing budget. It’s a direct hit, but Shiv hits back with strong loogie into his notebook. (Quick aside: That’s some good spit acting. A lot of force, not a ton of head movement. 9.5/10)

Of course, she has more planned. Shiv has penned a release about Kendall that she wants Roman and Connor to sign. It’s brutal, but accurate. “Yeah, accurate like Oswald was accurate,” Connor says. The statement reiterates a lot of what the Tweet That Sucked said—that Kendall is someone struggling with mental illness and addiction. One of his PR consultants shows him the statement at a very inopportune time, just as he’s about to prove how super cool and with-it he is by appearing on Sophie Iwobi’s show. Of course the content of the statement is fair game for the show, and he can’t have that. Before, it was easy to write off what Sophie said, no matter how many times she called him Oedipussy. That’s the show, as one of her writers puts it. No matter the content of her criticism, it was media attention—helpfully spun as a joke.

There is nothing funny about what Shiv had to say, and when her words are put in Sophie’s mouth, Kendall stops laughing. It’s the reverse of what he told the journalist about the first monologue. This does hurt because this is who he is. In the aftermath, he wanders the halls of the studio with dead eyes and the saddest of grins. It’s haunting! Eventually, he goes to hide in a server room to avoid appearing on the show. I thought he might start ripping out cords to force a delay in taping and give himself the out. What actually happens is a lot more pathetic and believable.

But oh, the drama gods are smiling upon us because here comes the FBI! As Gerri explained, these are the agents that you can’t tell to fuck off. There’s a brief moment of indecision, with CEO telling former CEO that they need to cooperate, and finally, Logan relents.

So there you have it. The FBI are in the building! Or as Tom hilariously tells ATN’s advertisers, “That’s what that is.”