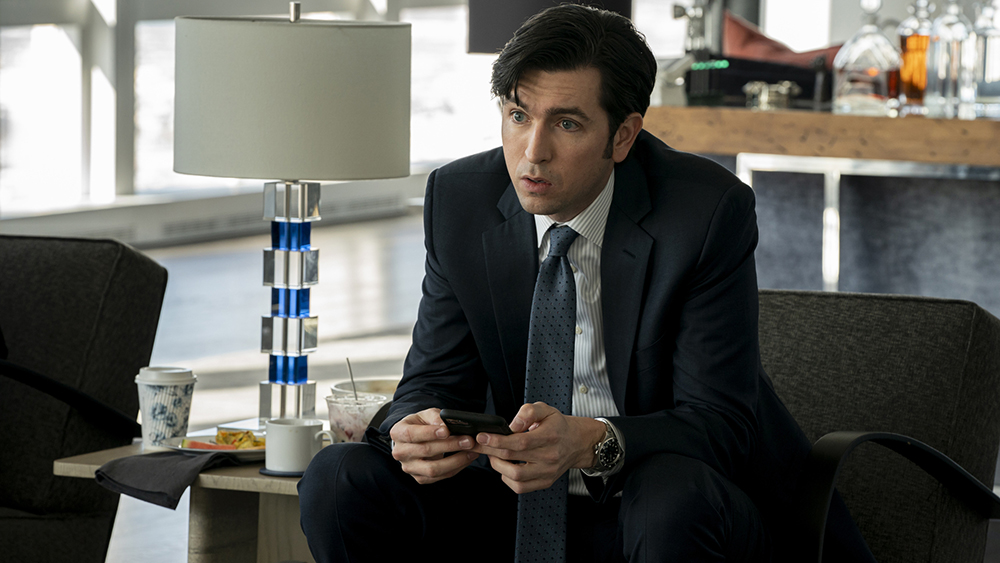 Pour yourself a rum and Coke, then chug it! It’s time for another episode of Succession, and this week, it’s all about leverage. A lot of people have it, and everyone is using it—even Tattoo Guy! Both teams, Logan and Kendall, understand how shaky their paths to power are, and they need every advantage they can get. Or as Logan so eloquently puts it, “Everything is coming up fuck.” That means recruiting people to their side, but can they do it? And how much will it cost them?

The hour kicks off with Kendall still rejoicing over the FBI raid on Waystar, but it’s going to be short-lived. Greg is being courted by the other side, but more importantly, Kendall is calling Greg “G.” Logan is losing patience with Greg and is eager to get him in a joint defense agreement. “It means you have weight, bro,” Kendall tells him, before pressuring him to stay and not betray him. “You’re an asset.” Greg, however, has to contend with the possibility of Logan’s goons, stooges and roughnecks.

But even as this War of the Roses plays outs, Kendall is still an employee of Waystar-Royco, and there’s some business to take care of. Do you hear that sounds? It’s Little Lord Fuck-LeRoy joining the call! Frank has everyone from the top of Waystar on the call, including Shiv, making it the first time she and her brother are speaking after her written statement. “First-rate composition,” Kendall says. “Really fucking horrible.” He’s not sure that he and Shiv come back from that, but I don’t know. If it’s advantageous, I imagine they could patch things up. There is investor blowback from the raid, and some of the investors are getting nervous, specifically Academy Award winner Josh Aaronson and his 4 percent. He’s thinking of switching to Sandy and Stewy, unless he can get some time in the room with both Kendall and Logan. It doesn’t seem possible to Ken, but with the shareholder meeting four days away, he doesn’t have much of a choice.

There is, however, a third shadow team within all of this—that of everyone’s favorite psychosexual not-really-a-couple couple, Roman and Gerri. Roman is looking for leverage of his own, and he thinks he’s found it. Apparently during Kendall’s bachelor party in New Orleans, they paid an unhoused guy to get Kendall’s initials tattooed on his forehead and Roman has managed to track him down. There is a kink in the plan, however. And it’s not that this a monstrous act of cruelty that Roman played an active role in. The Tattoo Guy is really a Used to Have Tattoo Guy. A few years back, he had the tattoo removed, and now only a faint shadow of the letters remain. Roman and Hugo absolutely manhandle this dude as they try to find traces of the ink, but it’s not enough. Roman needs photos, and he’s willing to pay $1 million for them.

When it’s Greg’s time to play his card, he’s only kind of sure how to do it—at first. While he swears to Logan that his hanging with Kendall is “purely social,” the former CEO makes it clear that such a connection makes his great nephew’s future at the company complicated. The JDA could clear things up, and here is Greg’s big opening! “What’s it worth?” Logan asks. “How much can I get?” Greg replies, not understanding the assignment. But luckily for him, he figures it out pretty quickly.

Unluckily for Terminal Tom Wambsgans, Greg’s apt gaming of the opportunity sends him into an existential spiral. The Egg doesn’t need him anymore, and even worse, Greg’s going to be running a theme park while Tom worries about the logistics of making toilet wine. Though the feds aren’t knocking on his door yet, Tom’s world is quickly falling apart. And it’s not just Greg—though he would castrate and marry him in a heartbeat. Shiv’s new role as president is being questioned from all sides (I mean, even Connor doesn’t respects her!), and she can’t spare a moment for her divebombing husband. At this point, a handhold in the office is too weak of a stance for her. All he is to her someone to get her what she needs. Tom has always been a pathetic character (in the best way possible. Matthew McFadyen’s performance is some of the best acting I have ever seen… ever) but season three has taken it to a new level, setting up his potential to be the series’ ultimate victim within the family.

Even Connor is annoyed with Shiv’s turn as president.  Photo: Macall B. Polay/HBO

Time for separate helicopter and plane rides! Because of his maybe-sick daughter, Josh Aaronson (Adrien Brody) is having the father-son duo meet out at his compound to find out how thing are going. “It’s a fuckpie,” Kendall says before Logan arrives. “But at the end of the day, it’s not that complicated.” The enormity of Ken’s delusion about his own likability is really on display here. Since the company turmoil began, Josh has lost $350 million, 10 percent of his 4 percent, and he wants to be made whole. Logan downplays the DOJ investigation, but it’s going to take more than that for Josh. How about a walk?

The first suggestion from Josh is pretty simple. “Close up the outrage shop,” he says, trying to get Ken to walk back everything he’s revealed. What Kendall hears is “This meeting, like everything else, is solely about screwing you, Kendall.” And when he momentarily freaks out, Logan spares a few words for his son to cut him right in half. “Are you okay, son? Some of those drugs that you do can make you paranoid, is that right?”

A moment must be spared for Frank and Karl’s French fry lunch. Have you ever seen fries eaten with such disdain? Shiv, on her many crusades across the building, attempts to make them do work, and they don’t like it. It’s enough to prompt a smack-down call from dad, who’s mad he’s expected to do so much hand holding. “Nothing is a line,” he tells her, rather wisely. “Everything, everywhere is always moving, forever.”

But I disagree. There is a line, and I draw it at not even touching the lobster on the table. Josh’s staff has set up an oceanside meal for him and Logan and Kendall, but they barely eat anything. It’s incredibly hard to watch. But also, they finally get down to negotiating. Josh doesn’t like Sandy and Stewy, but the father-son issue doesn’t feel right. He presses Kendall on whether he wants Logan to go to prison, and I wonder the same thing. “I don’t like betting on blood feuds,” he tells the Roys, prompting Logan to take out the big guns. “It’ll be okay,” he says, “because he’s a good kid. He did what he thought was best. I think he went too far, but he’s a good kid. And I love him.” Then, knowing that Josh isn’t the only one listening, Logan goes in for the kill. “Maybe it’ll be him one day. It’s in his blood. He learned it all from me. Maybe he’s the best one of all of them.”

Kendall is a puddle of goo, but he doesn’t want to admit it. Josh seems swayed, but when he steps away for a moment, Logan still won’t talk to Kendall. There really isn’t a line. “Nice speeches,” Kendall says on the walk back. “Yeah, well, you’ll say anything to get fucked on a date,” Logan replies. Since this does technically count for the Roys as father-son communication, Kendall tries to negotiate with his dad, but Logan is all fired up now. He has Greg. He has Tattoo Guy. Ken is dead. But all the sun and the hate has Logan literally nearing death. He collapses while they’re on the short way that sometimes takes longer, prompting Josh to call for a doctor.

Meanwhile, Shiv, with Logan’s advice banging around her noggin, heads down to ATN to deal with Mark Ravenhead herself. She thinks they’ve let the president off the hook on big tech, and if coverage went a little negative, maybe the president could rein in the DOJ. But Ravenhead is resistant, saying that he has a Perspective and a personal friendship with the president to consider. He even threatens to go public with the pressure Shiv’s applying, but she doesn’t really care. “The thing about us, Mark—and you should know this by now—is we don’t get embarrassed.”

And it works! The president catches wind of Ravenhead’s turn and loses it on the phone with Logan, who is now recuperating on his private jet. He lets his assistant hear the president’s screams, and it’s legitimately the happiest that Logan has ever been on this show. It’s terrifying! His call with the president ends with the simple fact that he could focus on keeping ATN on message if he wasn’t so tied up with an investigation.

Logan may be physically fine, but the episode on the trail had its costs. Josh is out and meeting with Stewey. “You tried to assassinate our dad with the sun,” Roman tells Kendall, after big bro assures little bro that Josh is a lock. The meltdown freakout scared Josh and signaled weak leadership, fractured at the top. “You wouldn’t give dad a timely fucking Evian,” Roman says.

And that’s to say nothing of the uneaten lobster.