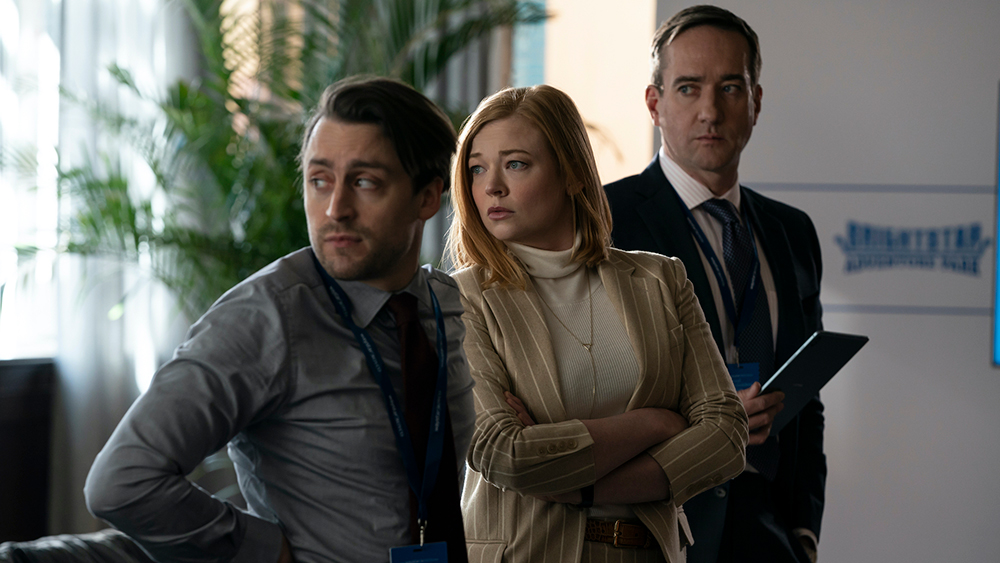 This week’s episode of Succession was a tense drama of technically complex financial dealings, and there’s no doubt one big question on everyone’s mind. So allow me to clear the air.

A bagatelle—as in “Your life is not a bagatelle”—is something of little value, substance, or importance; a trifle.

Got it? Great. Now let’s remember to take our meds and dive right in.

It’s shareholder meeting time. Yes, the long-teased gathering of Waystar-Royco investors that could decide whether the firm stays in the family is finally upon us. Pamphlets, sandwiches, lanyards, the foreboding need to pee abound! The portents of Logan’s decline later in the day begin as he’s leaving his apartment. It’s a classic example of Chevok’s piss. (If an elderly character is on medication and needs to use the bathroom in Act I, he’ll go piss-mad by Act III. Pretty standard stuff.)

The most basic understanding of the day’s events boil down to this: If Waystar can reach a settlement with Sandy and Stewy, they won’t have to open the matter to a shareholder vote and potentially lose control of the firm. But negotiations with the duo aren’t going so well. They aren’t making concessions and still push for four board seats. “Ridiculous!” Karl yells in outrage. “Full fat for them, corndogs and toenails for us.” The prospects on the vote aren’t looking good, either. On the bright side, Roman says that he and his siblings are all going to apply at the same Target branch, but Logan is hoping for a third option. He wants to know the status of his own extortion plot with the president. Ever since Shiv’s talk with Ravenhead, ATN has been running with a story about the president’s faulty memory and demanding tests.

The S Team: Stewy and Sandi lay out Sandy’s terms.  Macall B. Polay/HBO

Meanwhile, Kendall is arriving at the Marriott, eager to play puppet master, but also dealing with a case of Chevok’s bagel-eating rabbit. He knows that the vote is too close to call, which could spell disaster for his hopes of turning his crusade into a CEO pitch. Frank calls, cooking up his sweaty spaghetti, and informs Ken that Logan is ready to let this go to a vote. They plan to stay in touch throughout the day, keeping communications open—that is unless Frank is detained on stage for a few hours of sweaty, sweaty vamping.

But Ken is also working the other side too, swearing to Stewy that he wants a good deal for both of them. Kendall thinks he can see the bigger picture in all of this. Apparently Sandy and Stewy’s financing is wobbly, and they could lose $150 million if  things don’t go their way and they’re forced to walk. Everyone is afraid that Logan will purposefully take this to a vote and work his magic to sway shareholders.

And Kendall seems to get through because Sandy and Stewy tell Team Waystar that they want to talk settlement. Logan, however, is suspicious. “What do they know that we don’t know?” he asks, presumably before his UTI takes over. Everyone but Logan leaves to negotiate, while Frank gets “nailed to the cross” on stage. (This is only a slight exaggeration.) The offer is reasonable (three board seats, among some other less significant asks) until they get to the veto. Sandy, apparently suffering from syphilis if ATN is to be believed, wants the right to refuse any Roy family member taking over as CEO. It’s an immediate deal breaker for two of the Roys hoping to take over as CEO. One of them, Roman, asks how can they know that older Sandy is not a meat puppet. “I just do what my dad tells me, like you guys,” the younger Sandy says.

Gerri’s vote on the deal with Sandy and Stewy doesn’t sit well with Roman.  Macall B. Polay/HBO

Karl likes the deal, and so does Gerri, much to Roman’s chagrin. He and Shiv hate it, and so does Logan. But this could be a landing space, which is apparently something that people who make deals say, and Sandy and Stewy are seen as very ready to deal. So as Frank heads out onto the stage, with Gerri’s speech in the prompter and Josh Aaronson in the crowd (good on Adrien Brody for showing up for a single crowd shot), the mood is tense but a deal is within sight…

…As long as no one goes piss-mad.

‘Twas a bad week for Greg, who while trying to avoid getting it in both ends, winds up in exactly that position. His apology to Kendall very quickly turns into what I believe is technically a burn notice. The DOJ has been too non-committal for Kendall’s liking, so he needs some red meat to throw them. Greg is taken aback, especially since Ken said that he would protect his source. “Let’s not he said-she said this,” Kendall says. “A lot of shit gets said.” Naturally, Greg has some questions. “How bad will the burning be?” But not to worry, Greggy. “They’ll probably just fuck you and chuck you to get the red meat.” So, not so bad. Of course, the alternative is dropping from the joint defense agreement.

Speaking of which, Ewan—”the best darn gramper out”—is not happy about Greg firing his good friend Roger Pugh, and as a result, he’s making some changes to his will. When Ewan passes away, the entirety of his fortune is going to Greenpeace, and Greg’s portion is going first. Greg demands to know why, and James Cromwell proves his status as a g.d. legend for the upteenth time. I mean, that pregnant pause before “Because you need to take yourself seriously, kid.” I want to live in that pause, wearing a comfy cardigan and a newsboy cap.

Ewan has some bad news for Cousin Greg.  Macall B. Polay/HBO

Sandy has one more proviso. To lock in a deal on the settlement, the Roys need to get rid of their private jets. A personal attack, wrapped in the guise of do-goodery? Hey, Sandy and Kendall should hang out! Logan, instead of making a call on the proviso, decides that he has to use the restroom and that Tom has to help him. When he returns, he has his answer. “Fuck ’em.” But considering the trajectory of his mental spiral, that just seems like a lizard brain reaction. Most of the gathered party doesn’t know exactly how to take the decision, but Roman shows how delusional he is when it comes to his daddy worship. “He’s gambling the company because he’s a fucking badass,” Roman says. Really pathetic. “He’s six moves ahead.” Shiv makes the “fuck ’em” call. “I just do what my dad tells me,” she tells young Sandy, happily parroting back her shade.

But whoops! Turns out that Logan is out of it. Tom is the one who makes the big discovery on a subsequent journey to the far-away bathroom. Of course, this is after he guesses that Logan got stuck in a zipper. “Hey, big man,” Tom says. “Did you get it caught? You don’t need me to hold the scepter.” Logan’s assistant, Kerry—who is watching from inside the conference hall—informs the group that he has a UTI, and Connor relays that the affliction can cause confusion in the elderly. Roman declares him “piss-mad,” and delightfully, that becomes the agreed-upon term for Logan’s state. The next logical question is how long has he been piss-mad? Did UTI brain inform his “fuck ’em”? Logan still wants to give his speech, but that’s impossible. Though Karl does make a good point. “It would be great to get the body up there,” he says.

When Kendall arrives to berate the team for not closing the deal, it’s clear that he’s less welcome than the imaginary cat under Logan’s chair. But his screaming about making a deal underlines that fact that they really do need to make a deal. So Shiv steps up—with a blessing from all those who aren’t piss-mad—and reaches out to the younger Sandy. The offer is a fourth seat on the board, allowing for an additional one of the Waystar side for someone (specifically) like Shiv, of course.

It’s in the middle of all of this chaos that the president calls. He’s pissed (not like Logan), and there’s no Logan to talk to him, though Connor is game to stand in. “I’ll talk to him, the little bitch,” he offers. Gerri suggests Roman is the closest they have to bootleg Logan, so he takes the call. The president isn’t running again, according to him because of the negative attention from his minor memory issue. The firm has lost their most powerful ally. But there is a bright side. “It’s kind of nice to know that we can puppetmaster the whole republic project,” Roman points out.

There isn’t much time to linger on national politics. Shiv reports back with the offer, and they all need to make a call. Logan is asleep and receiving fluids, so it’s up to all of them. But really, in the end, it comes down to Roman giving a nod to Shiv and the rest falling in line. There’s some celebrating, in which Tom reveals that he’s been tracking Shiv’s fertility, which is not horrible. It’s nice!

As Frank takes the stage to report the settlement, Kendall wanders out, sensing that his spotlight is fading and not even wearing a tie, as Tom points out in disgust. He calls for a moment of silence for the victims of the company. “He looks crazy,” Karolina says, “and I think that could be good for us.” Kendall says he’s starting a foundation for the victims, but what I’m really struck by here is how complex this character writing is. His whole arc this season is about how the moral high ground can be easily co-oped by the self-interested. Kendall has sought approval and acceptance from just about every other port. He’s basically trying out goodness as a matter of due diligence. How about the socially conscious? Will they love me?

The answer is looking like a solid “no,” especially as his mic is cut. Logan comes to just in time to hear the deal news and baselessly poo poo it. And to really make sure his second oldest son feels like a dipshit, Logan makes him wait in a hotel room for a meeting that’s never coming. Man, Kendall’s story just gets sadder and sadder. Let’s just hope that it’s true that if a doctor can do people, he can do rabbits.