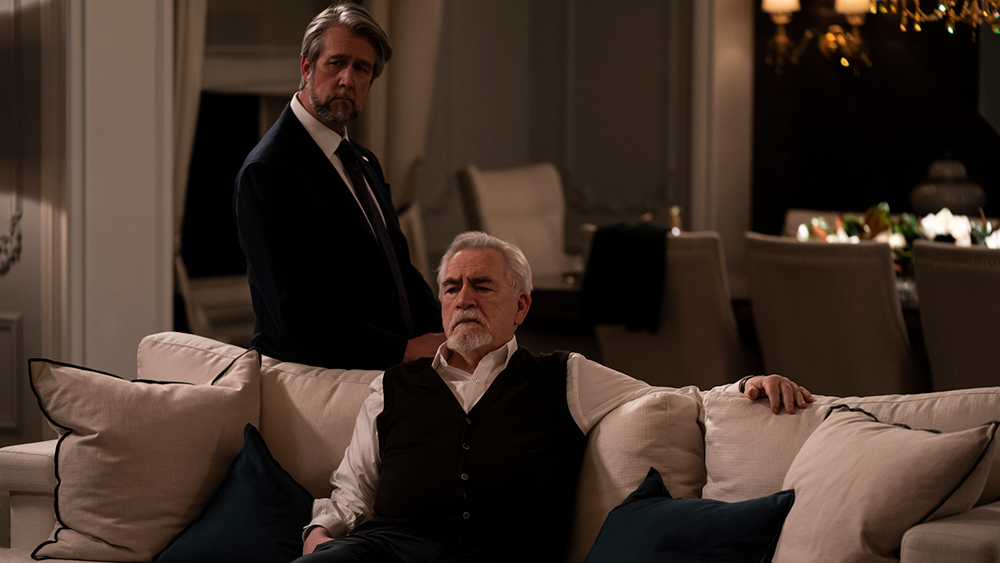 Since Succession premiered, there seems to have been an ongoing conversation about the morality of chuckling along at the vast wealth and conservative power playing of the Roys. Defenders of the show could point out that anyone with a critical eye would watch and see that these character are portrayed as inherently broken, pathetic—albeit very human—people.

But then again, not everyone has a critical eye, the other side might reply.

Putting luxury on screen will inevitably attract aspirational viewers, and there’s nothing inherently wrong with that. There’s an escapist pleasure in watching characters who have the stuff we want. But fawning over the Roys’ PJs, designer suits, and superyachts can come at the expense of recognizing what keeps these characters and their real-world corollaries (the Murdochs and their ilk) rich—the self-dealing, labor exploiting, and election rigging—and the misbegotten influence they have over the rest of us.

The sixth episode of the third season—a supremely dark and utterly compelling hour—stands out from the rest of the series in my mind because I don’t believe the show has more plainly demonstrated how ugly these people really are.

The episode addresses its title, “What It Takes,” in two major ways. The first is the more superficial. The Roys head down to Virginia for the gathering of a Republican thinktank in order to anoint their choice for Republican presidential nominee. The Raisin’s sudden and unexpected announcement that he wouldn’t seek reelection has thrown the party into chaos, just months out from the next election, so the top candidates are angling for the ATN bump.

The more thematic meaning of the title refers to doing what is necessary to achieve a goal—and it’s usually repugnant. Logan wants to survive a squeeze from big tech and the DOJ’s seemingly waning investigation into cruises. Kendall hears that his “defensive and high-handed” personal nature is actively damaging that same case, but when has he ever been able to self-evaluate and adjust? Tom is doing what he can to adapt his palate to the prison lifestyle with the help of diner food and even accepting Greg’s request to take the fall for his part in the coverup. Shiv is facing the fact that she’s working for the baddies—and that no amount of distance in a family photo is going to save her from culpability.

Success for all of them comes down to having what it takes, but also lacking in the right places, particularly in the shame arena. Even though, just two episodes ago, Shiv won a stalemate with Ravenhead by declaring that the Roys don’t get embarrassed, there is a spectrum of shame. And in the world of Succession, shame may be a moral asset, but it’s a professional liability.

When the gang arrives at the fascist fest, the thinking is that the easiest candidate to sell is the closest to the status quo, Vice President David Boyer. Logan, who may or may not be but actually definitely is having sex with his assistant Kerry, expects the gathered party to stay on-message. They’re worried about the unchecked growth of big tech and the deputy attorney general’s purported dartboard portrait of Logan.

There will be plenty of ass kissing and Coke delivering, but before then, there is the small personal matter of Kendall, Shiv, and Roman’s mom getting remarried to some guy named Munion. “New dad just dropped,” Roman announces to Kendall, who simply cannot not take a call from his family, maybe hoping that they’ll finally wake up to his genius and love join him. The new wrinkle doesn’t get much of a resolution beyond Logan learning about the engagement and declaring Munion “The Seat Sniffer,” but this does feel like foundation being pour for something more dramatic between now and the season finale.

The other story element that seems poised to resolve itself in the next four weeks is Tom’s impending prison sentence. Our guy Wambgans has a new nickname around the office: Christmas Tree. The idea is that everything is going to get hung on him, and Greg has something he’d like to add to the bows. You see, he’s worried that his physical length making him a target for misadventure. Tom accepts Greg’s criminal bauble because he has a new ethos. Don’t hope. “What’s good is to eradicate hope,” he tells Greg.

This lowpoint is what makes him such an enticing target for Kendall, who could use the help. No matter how Lisa tries to prepare him for his interview with the Department of Justice, Ken’s arrogance and personal grievances, paired with Waystar’s deft legal maneuvering, are scuttling this case. The talk does not go how he was expecting—I’m guessing he wanted a confetti cannon and a certificate declaring him national hero and CEO—and since this is Kendall, there’s only one place to lay the blame: with anyone else but him.

So Lisa is gone. She’s toxic and bad and it’s not Kendall’s fault so she’s gone but his 40th birthday party is going to be fire and you should totally come. But first, he needs to bolster his case, which mean going down to Virginia and meeting with Tom in a scene reminiscent of De Niro and Pacino squaring off in Heat. Kendall’s pitch is that he’s heard people call Tom “The Christmas Tree”—“Perhaps that’s because I’m tall and jolly,” Tom guesses—and he’s the only one who can save the big guy from prison. All Tom would have to do is say that nothing happens at the firm without Logan’s sign off.

But since Kendall fears rejection most of all, he can’t stop himself from going personal in the face of hesitation from Tom. He asks if his brother-in-law really thinks that Shiv will wait for him to get out. It’s, no doubt, a touchy subject for Tom, who no longer even sees the point of sex with his wife. “It’s still like throwing so much cake batter at a brick wall,” he tells her, since she’s still on contraception. Tom, however, isn’t so easily swayed by the low blow. “Having been around a bit, my hunch is that you’re going to get fucked,” he says to Kendall outside his training diner. “Because I’ve seen you get fucked a lot. And I’ve never seen Logan get fucked once.”

Is this the part of the recap where I talk about how Tom Wambsgans is the best part of this very good show? I’m going to say yes, because once again, I’m bowled over by both the writing of him and Matthew Macfadyen’s performance. He’s always been compelling as the outsider desperate to enter an extremely toxic enterprise, but with prison looming, he’s been given perspective on everything that’s he fought so hard for—his job, his status and his marriage. And it all sucks. Now, everything that has become so rote to these characters can still have a sick novelty to Tom. It’s evident in Macfadyen’s expert delivery of Tom’s parting words to Kendall.

“Do you know what they’re doing up in the suite? They’re picking the next president.”

He’s not kidding. The state of the race for the Republican nomination is such that a push from ATN could all but clinch it. “They’re calling the ATN primary,” the vice president says. In the running with Boyer is Salgado (whose appeal to Shiv is “I’ll arrest your dad”) and dog whistle virtuoso Jared Menken.

Oh, and Connor. “He’s a good looking kid. He’s smart… in his way,” Logan says, while they’re holed up in a suite to make the pick. (Side note: I love the idea of everything-to-lose, inheritance-free, Greenpeace-suing Greg Hirsh putting it all on the line for his country to ask Logan not to crown Connor.)

The three non-Connor candidates come through the suite to kiss the ring, and while all three are played by notable and competent character actors, it’s Justin Kirk’s Menken that pulls ahead with a chilling sales pitch to Roman in the bathroom. The youngest Roy is concerned enough about a fascism to at least say “Fascists are kind of cool, but not really.” Menken counters by saying that he’s but a participant in the marketplace of ideas, borrowing freely from Franco, Taxi Driver‘s Travis Bickle, and “H,” an abbreviation for Hitler and a red flag so big you could tent the White House with it. And Menken continues. “You have to put in before you get to take out,” he says, talking about the country’s makeup. So he’s a total piece of shit, and in Roman’s eyes, exactly the guy for the job.

The rest of the debate back in the suite is less of an argument among candidates than it is among siblings. Logan presides over it all, gleeful. Roman ultimately makes the best case, somehow convincing the his dad that the guy who called him “irrelevant” hours earlier is the man who should be president. Shiv’s concerns about the fate of democracy fall on uninterested ears, because it’s really not a concern. A Menken presidency would mean nothing for Logan other than tax cuts and deregulation. It’s not like he’d be oppressed.

But even Shiv’s principled stance falls the next day when Logan wants her to appear in a family photo with Menken. “Siobhan, are you part of this family or not?” Of course, she is, because she’s a Roy first and an American second.