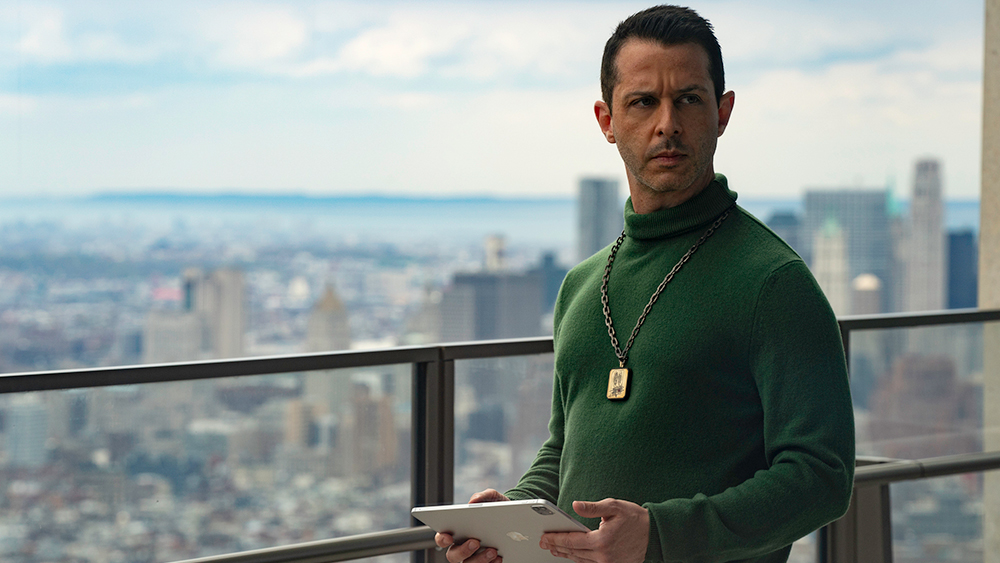 For weeks, Succession has teased Kendall’s approaching 40th birthday, and for the seventh episode of the season, the show finally delivered. It’s time to party! But not that kind of party. It’s the kind where no one really has any fun—except Greg, in the end—and where a bunch of characters experience existential crises or should experience one but don’t because they’re a complete egomaniac.

Or as Kendall might phrase it, not a real person.

The fête that was promised functioned as one huge setpiece that occupied much of the episode’s runtime, and it was less of a true birthday party and more of a tour through someone’s psyche—an asshole’s psyche—but a complicated, impeccably written asshole at that.

The hour was a nice counterpoint to the third episode of the season, where we saw Kendall’s bluster and righteous crusade really tested both by Sophie Iwobi and then Shiv in her editorial. He maintained that none of the criticism could hurt him because it isn’t who he is, but we’ve seen what happens when Kendall comes too close to look directly at his own reflection. This episode, aptly titled “Too Much Birthday,” brings him—mentally—back to where he was just before the FBI raided Waystar, huddled and wanting to disappear.

Naomi watches as Kendall does a weirdly impressive soundcheck for his rendition of Billy Joel’s “Honesty.”   Photo: Macall Polay/HBO

The party is what you’d get if you turned Kendall’s massive headphone blaring rap into an event. He’s trying to “go nut-nut” and turn the volume up as loudly as possible to drown out the noise he can’t stand to hear. No one loves you. You’re a bad father. You’re nothing but an addict. You killed a kid. For much of the season, he’s had his whistleblower campaign to drape himself in integrity, but with the DOJ case floundering, he’s turned his energy to his party and invited all of his insecurities. “If I start second guessing, it collapses,” he tells Naomi (who might actually be as good for Ken as he told Rava she was). And boy is he right!

Before the festivities officially begin, another, more cautiously optimistic celebration is popping off down at Waystar. Gerri’s DOJ contacts are hinting that all their investigation will amount to is a fine and no jail time for anyone. This ties into Lisa’s read on the state of things from the previous episode. Waystar is cooperating enough, and Kendall seemingly under-delivered. But, Gerri warns, this is just where the “vibrations” stand at the moment. Logan seems convinced, though, and he assures Tom that he’ll remember how his son-in-law stepped up to go down.

Taking Gerri’s advice to heart, Tom excuses himself and makes for Greg’s office, where he promptly flips over a desk, shouting “The Waystar Two are free!”

Not all the news is good though. Lukas Mattson (Alexander Skarsgård) has snubbed Logan. He’s the creator of Gojo, the killer streaming platform that Waystar has been eying, and now Papa is so upset that he flashbacks back to season two and floats reaching out to Nan Pierce about an acquisition. But there’s another chance to get at Mattson: Kendall’s party. He’ll be there, no doubt on the lookout for what he affectionately calls the Three Ps (privacy, pussy, and pasta). So Roman and Shiv finally have an excuse to attend their brother’s birthday, apart from seeing how much of a shitshow it is.

Shiv and Roman try to convince Logan not to scrap the Gojo deal.  Photo: Macall Polay/HBO

If there isn’t a giant, inflatable recreation of your mom’s vagina, is it even your birthday party? Kendall’s answer to that question is “No, and please take off your coat.” Roman, Shiv, Tom, Greg, Connor, and Willa all roll into the party and through the birth canal. While Ken’s two younger siblings are there solely for Mattson, Greg has another mission in mind. He’s going to ask out Comfry, one of Kendall’s PR reps. Tom, who plans on getting really fucked up, has some doubts. “It’s like a haunted scarecrow asking out Jackie Onassis,” he says. But Greg is prepared. He has a line. “You’re like a fascinating book I’d like to crack open.”

In a scene that captures the contradictions warring inside Kendall, he shows his siblings—the only people he really wanted at his party—gallery prints of fake frontpages announcing their arrest, death in a jerk-off incident and shitting of one’s bag. The gag has the intended effect, though Connor—who will not take off his coat, which by the way is really just a light jacket—especially doesn’t like being reminded of the bag shitting. As he takes off into the party, Roman passes along Logan’s “birthday” card, and Kendall opens it, fittingly, in a burning replica of his Waystar office.

The card instructs Kendall to “cash out and fuck off” and contains a share purchase proposal. The move would completely buy him out of the holding company, to the tune of $2 billion. Naomi, when she finds out, brings up a cogent point. “Maybe you do take it.” The offer, however, is the spark that ignites that rest of Kendall’s night.

Shiv and Roman really want to get into Kendall’s treehouse.  Photo: Macall Polay/HBO

Speaking of sparks, Greg talks to Comfry like he’s at a Ren fair. The “very even-handed maiden” might have to brief the press on Greg soon, but she promises to be targeted, rather than terminal. So it seems that as Ken’s case with the DOJ really is floundering, the threat to burn Greg is seeming more and more real. But our boy is a romantic, and orchestrating a smear campaign against him is not enough to turn the heart of the lord.

After Kendall catches wind of Shiv and Roman’s plan to speak with Mattson and stashes the Skarsgård in a replica of his childhood treehouse, he dives further into his inner turmoil by speaking with Rava. She tells him that Sophie and Iverson made him a gift and that goons from Waystar are interrogating their nanny, but what I really want to talk about here is the anti-Kevin rhetoric from Kendall. There’s nothing funny about the name Kevin. It’s not cool to mistakenly call Rava’s date by that name. Nothing! It’s a perfectly fine name.

The conversation sends Kendall into an even steeper downward spiral. He makes fun of a guy’s shoes for no reason, lambasts his reps for throwing an asshole’s party when he specifically asked them not to, and then calls Greg a tape worm for wanting to ask out Comfry. Greg does get back at him, though, by tapping aggressively on a TV screen bearing Kendall’s image.

Roman finds Lukas in the treehouse and gives his pitch. It makes sense, Lukas has to admit, but he has one big question. “When will your father die?” “We’re all obviously hugely looking forward to my father dying,” Roman says, but there can be an alternative to waiting for Logan to croak. Roman offers to be Mattson’s sole point of contact within the company, and they seal the arrangement with a piss. Mattson literally urinates on Roman’s phone as it struggles to load Waystar’s shitty streaming app. Roman can’t piss near other men “due to we don’t know what reasons,” and considering how the episode ends, I’m really hoping that the youngest Roy’s psyche gets as thoroughly examined as Ken’s. Mattson agrees to meet with Logan. He’s not selling, though. But he’s in the conversation. See you next week, Alexander?

Kendall saves his full breakdown for the privacy of the present room. He’s canceled his crucified rendition of “Honesty” by Billy Joel and nixed the Tiny Wu-Tang performance, much to my personal disappoint. (If Tiny Wu-Tang is “better than it sounds,” as Kendall tells Rava, they must be amazing.) When he and Naomi can’t find his kids’ gift, she tries to save things by giving him a watch and offering a blowjob. He responds very rudely and then continues to look, before falling apart. “I wish I was…” he begins to say, and I can’t help but think he wants to say “dead.” He blurts out “home” instead, and Good Girlfriend Naomi says they can go.

Unaware that her boss is leaving, Comfry is still on the job trying to track down a jetpack, when Greg approaches her with his big question. She tells him all about all the retro lunchboxes she had to hunt down only to have Kendall change his mind at the last minute, leaving her to resell them on eBay. Whether out of rebellion or genuine attraction, she says yes to Greg’s invitation out.  It’s completely delightful that Ewan’s big vocabulary has seemingly rubbed off on Greg, who understands that Comfry may have agreed to go out because of “rancor or pique,” meaning a feeling of irritation or resentment resulting from a slight, especially to one’s pride.

The news that Logan and Roman planned to buy Ken out of the holding company without consulting her sends Shiv out onto the dance floor. Once she’s finished doing her best Kat Stratford from 10 Things I Hate About You, she joins Roman in the treehouse and learns that he’s already handled Mattson. That success and the feeling that he might be the best businessman alive turn Roman into an absolute monster, mocking Shiv’s indignation by theorizing that she’s mainly upset Tom isn’t going to prison. When Kendall and Naomi pass by to leave, things only get worse. Ken asks if any part of them wanted to see him on his birthday, and of course the answer is no. Roman then continues to heap on the torment, admitting to spying on his niece and nephew (something Shiv didn’t know about) and suggesting that the only problem people have with him is his success. It’s possibly the most villainous display any character outside Logan has ever put on.

Thus, another week of Succession ends on a down—albeit dramatically satisfying—note. A solid episode, for sure, but one that really could have been made sublime by a Tiny Wu-Tang performance.