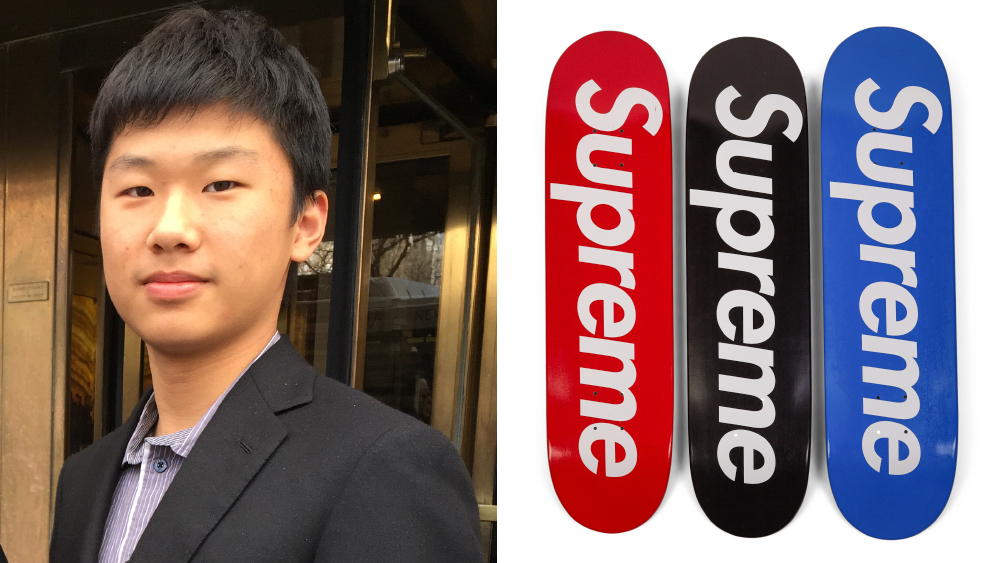 Carson Guo’s recent acquisition of a series of skateboard decks from the streetwear brand Supreme began with, of all things, a pair of chopsticks.

Two years ago, the Vancouver-based collector spent around $115 for a pair of Supreme chopsticks. That purchase was just the start for Guo. Last month, the 17-year-old, who used to work part-time at a streetwear store, spent $800,000 on 248 skateboard decks, which had been released by the brand over a 20-year period between 1998 and 2018. Originally collected by Ryan Fuller, these boards include pieces that blur the line between fashion and art, featuring work by artists like Damien Hirst, George Condo, and Jeff Koons. There are also two Louis Vuitton decks—the first, in 2000, lifted the luxury label’s logo without permission, and later, the two labels partnered for the much-hyped fall 2017 collection.

Guo may be young, but he comes from a family of art collectors. “My father is a collector who buys from auction houses and galleries. My older sister graduated with a degree in art history from UBC, and she is my father’s adviser in his acquisition of fine art. She is also a collector of fine art, and the two of them are my mentors,” Guy told Robb Report via e-mail. The family owns pieces by towering artists like Picasso and Monet. The teen collector’s proclivities, however, veer more toward street culture.

“I love how Supreme started as just a skateboard brand, and has now become the top streetwear brand in the world,” Guo said. “I love the advanced and free-minded culture behind Supreme, but most importantly, the rarity of their products and collaborations with many other respected brands.”

The collection of decks had a top estimate of $1.2 million, originally, and Guo had one million earmarked for the purchase, so, relatively speaking, he got a pretty good deal. “The collection is worth the price to me because many of the decks are designed and/or signed by world-famous artists such as KAWS, Damien Hirst, Jeff Koons, and more,” he said. “Also, the time and effort that the seller Mr. Ryan Fuller put in to complete the set is priceless.” (At $800,000 for the entire line, each of the 248 decks sold for an average of $3,225.)

“As the only complete archive of Supreme skate decks in private hands, this collection is of singular rarity and importance,” Sotheby’s head of e-commerce, Noah Wunsch, said in a release. “We have been overwhelmed by the response we have received from collectors and fans of Supreme, streetwear, skate culture, and contemporary art alike, who came out in droves to view the archive in our galleries, on our website, and across social media.”

As you might expect from the man who bought Supreme chopsticks, Guo is no stranger to the New York–based brand. He says he owns around 200 items from Supreme, “including a few skateboards, some clothes, and many accessories.” But his favorite piece? A Supreme x Everlast punching bag, which is available on the website Kixclusive right now for a cool $15,000. “The piece is very rare, and I think it is absolutely fascinating that Supreme collaborated with Everlast,” Guo said.

As for his most recent acquisition, Guo said the decks will go on view in an upcoming gallery in Vancouver for both hypebeasts and art connoisseurs alike to enjoy.

“Street culture has slowly become a part of the modern world,” Guo said. “I think it is important for more people to appreciate and understand the culture behind street fashion.”