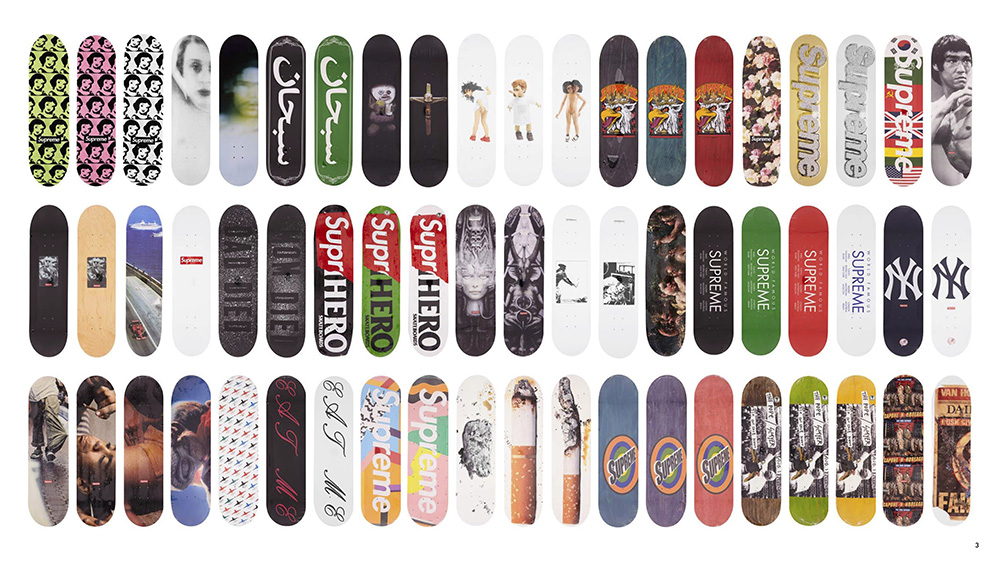 It seems you can slap a red and white Supreme logo on almost any product and it increases in value. Case in point, last month we saw the brand auction 1,300 goods and accessories for characteristically sky-high prices ($80,000 for a pinball machine anyone?). So we’re hardly surprised to hear a collection of 132 Supreme skateboard decks snatched £125,063 ($158,589) at a Bonhams auction today in London.

The decks were sold as a single lot to a young Chinese collector. Cassi Young, head of Bonhams modern and contemporary sale, said in a press release: “We are so pleased with today’s result. The 132-deck collection featured the most sought-after editions produced by the brand between 2011 and 2019.”

Of course, it wasn’t simply the streetwear brand’s imprimatur that rendered these so valuable—there were blue-chip artists behind each board: Cindy Sherman, Nan Goldin, The Champman Brothers and skateboard enthusiast/indie filmmaker Harmony Korine are just some of the artists who turned the decks into canvasses. The collection also featured pop culture references aplenty, with pictures of Bruce Lee, Michael Jackson, Marvin Gaye and Macaulay Culkin, as well as stills from The Godfather, Taxi Driver, Kids, E.T. and cult anime film Akira.

Skateboards and Supreme have had an enduring love affair. The brand first popped an ollie in the fashion world back in 1994 when it started slinging clothing for skaters from its storefront on Lafayette Street in downtown Manhattan. It had success well beyond the skate scene but decided to launch a trademark line of skateboards in 1998. Noteworthy artists were quick to put their hand up to collaborate and swap canvases for one of the brand’s coveted decks. The end result? Collections like these which blend off-the-wall art, pop culture and, of course, skating.

Today wasn’t the first time Supreme’s boards have rolled onto the auction block. Back in January, a collection of 248 decks went up for sale at Sotheby’s with a whopping estimate of $1.2 million. They were snapped up by 17-year-old Vancouver-based collector Carson Guo for $800,000. “The collection is worth the price to me because many of the decks are designed and/or signed by world-famous artists such as KAWS, Damien Hirst, Jeff Koons, and more,” Guo told Robb Report in February.