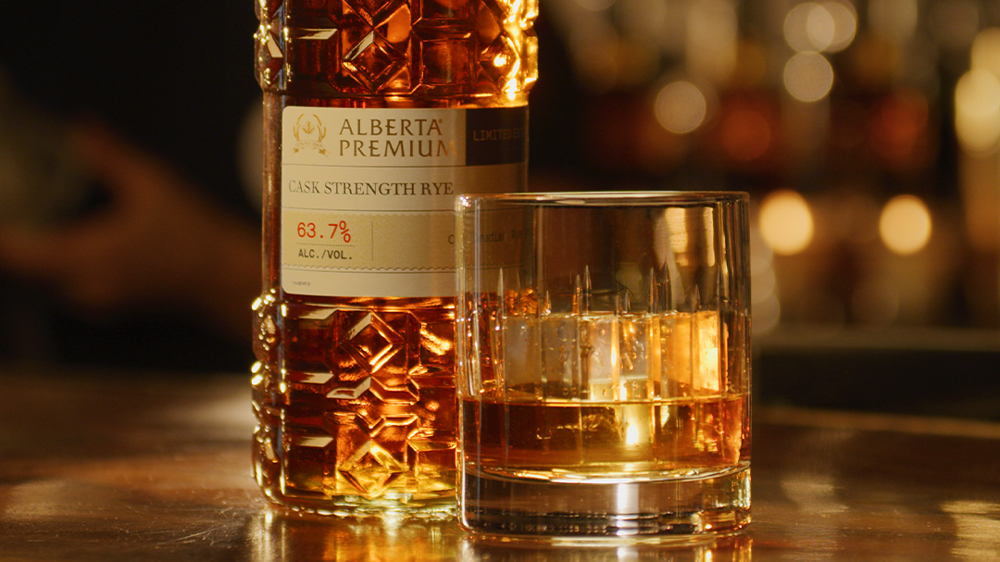 If you’re a whiskey fan, it’s very likely you’ve tasted something from Alberta Distillers Limited before and perhaps not realized it. This distillery, located in Calgary, has been making whisky (remember, Canadians spell it without the “e”) since 1946, and has been owned by Beam Suntory since the late ‘80s (just Beam Inc. at the time, pre-Suntory acquisition). The distillery produces its own brands, one of which is the focus of this review, but it’s also the source of some well-known, high-end rye whiskey bottled here in the US. The most popular is WhistlePig, the Vermont distillery that uses Alberta rye, along with some from MGP in Indiana, for its core bottlings (it’s also releasing in-house distilled whiskey now). Masterson’s is another rye whiskey sourced from ADL, as well as the aged whiskeys released under the Lock, Stock & Barrel name.

Which brings us to the new release of Alberta Premium Cask Strength Rye, the uncut, high-proof version of the distillery’s regular Alberta Premium rye whisky. It was first introduced to the US last year and racked up some awards, including Double Gold at the 2020 and 2021 San Francisco World Spirits Competitions. There have been some other cask-strength Canadian whisky releases, but by and large it’s not as popular a category there as it is in the world of bourbon and scotch. But this one is a beast of whisky, made from a mash bill of 100 percent rye and coming in at between 63 and 66 percent ABV (the bottle I sampled from this year’s release was 66 percent).

While “rye whisky” is sometimes used as a catch-all to refer to Canadian whisky in general, this is indeed a true rye whisky. The color is a rich amber-brown, and while Canadian whisky can have color added, a rep for the brand says it’s “bottled straight from the barrel uncut and completely unadulterated.” Take care while nosing this whisky, because there’s a good deal of alcohol at this high proof. Still, notes of honey and a ripe fruit basket come through, typical for a rye. The palate is hot and spicy, and I don’t mean just typical rye baking spices, but also some black pepper and even cayenne notes. Even with barrel-proof whiskies, I don’t normally like to add water, but this is a welcome addition here. The flavors really start to widen and blossom, revealing espresso, dark chocolate and a bit of mint and more honey on the finish, almost like a cup of peppermint tea.

So what should you do with this whisky? I’m not entirely sure how to answer this. You could make a really spicy Manhattan with it, which might be good but will also likely get you kind of drunk. As interesting and well-crafted as this whisky clearly is, I’m just not sold on sipping such a strong, rye-forward expression, although I’m sure Canuck whisky geeks and rye champions will beg to differ. But if you’re a fan of strong, assertive Canadian exports like Drake, Sandra Oh, Tommy Chong, Ryan Reynolds and Nickelback’s Chad Kroeger, this bold whisky should be right up your alley.