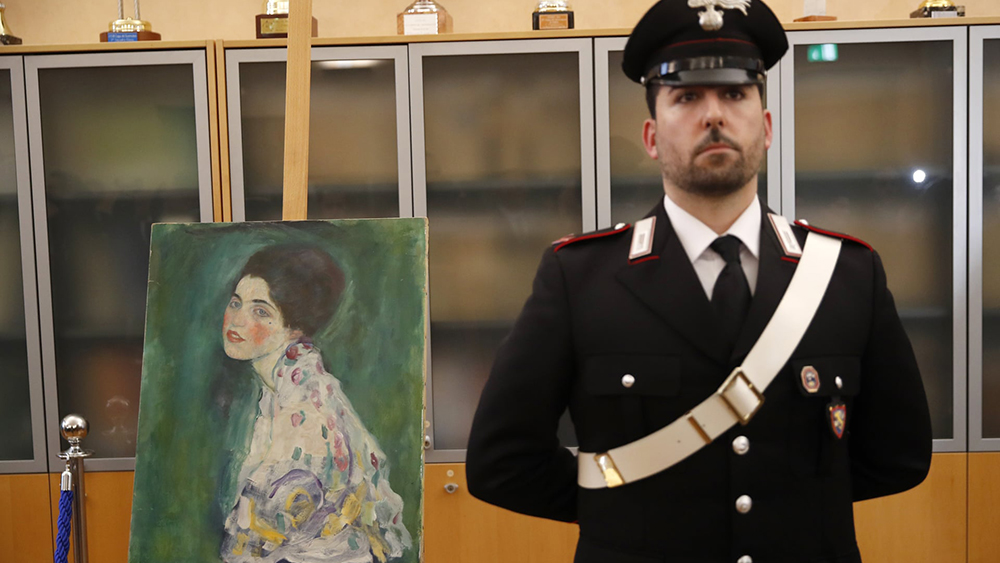 Courtesy of Antonio Calanni for the AP

Whatever form it comes in, following an art heist has a particular kind of thrill, one made all the more hair-raising when the art involved is especially valuable and the plot has a twist ending. We got all that and more from a case in Italy involving a stolen Klimt that was 23 years in the making.

In 1997, Gustav Klimt’s Portrait of a Lady was stolen in the lead up to an exhibition in the Northern Italian city of Piacenza where it was set to be featured. Its whereabouts remained a mystery until December when two gardeners clearing ivy on the exterior of the Ricci Oddi modern art gallery––the very same gallery it was stolen from––uncovered it wrapped and hidden within a concealed panel. The duo responsible confessed in a letter to local journalist Ermanno Mariani and confessed to police on Friday when they were both questioned.

Both men involved, who authorities believe were part of a gang responsible for several art thefts in the region at the time, recounted the details of their crime to Mariani and stated that they returned it “as a gift to the city.” Guido Gulieri, the pair’s lawyer, told The Guardian that they placed the painting behind the recessed metal panel where it was discovered four years ago, but did not reveal how it found its way there or where it was stored for nearly two decades in the interim. Gulieri says the suspects gave police the address for a house where it was stored, but the validity of that claim has yet to be confirmed.

Gustav Klimt’s Portrait of a Lady, 1916.  Courtesy of Getty

But why the sudden confession after so much time has passed? It seems likely that that was just as strategic as the crime. Because more than 20 years had elapsed, the statute of limitations was up, so the perpetrators wouldn’t serve prison time. Simultaneously, they might be able to get leniency for another crime for which they were awaiting sentencing. “They won’t go to prison for it,” Gulieri noted. “But the good news is, we have found the painting.”

Worth an estimated $66 million, Portrait of a Lady is precious not only because it’s a work by one of the 20th century’s greatest artists, but also because it is believed to be the only “double” work in his oeuvre. This means, as far as anyone in the art world knows, it is Klimt’s only painting which was painted over another of his pieces––Portrait of a Young Woman in this case. It’s safe to assume that security measures will be a little tighter the next time it goes up for display.