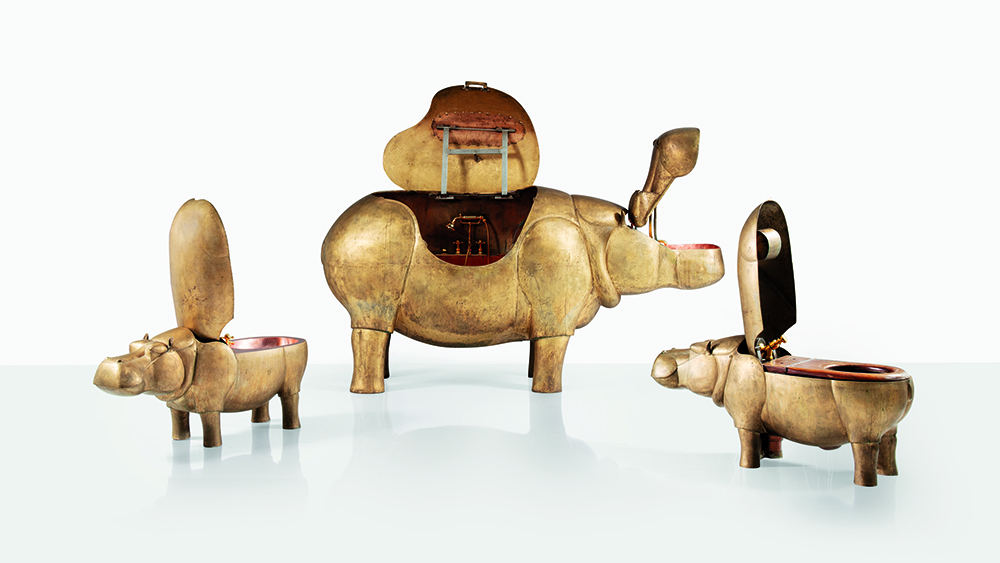 The luxury and auction markets may be scrambling to deal with the fallout from the coronavirus crisis, but collectors’ appetite for the truly ridiculous appears to be alive and well. For proof, look no further than a hippopotamus-themed bathroom suite that sold for a jaw-dropping $2.4 million last week.

Dreamt up by French sculptor François-Xavier Lalanne, the whimsical bronze three-piece set, dubbed “Famille Hippopotames,” was sold as part of Sotheby’s “Important Design” auction this past week in Paris. In all, the contemporary art and design sale, which included five pieces by Lalanne, brought in $33.6 million for the auction house.

The headline lot, of course, was Lalanne’s set of three life-sized hippos, which used to reside in the unnamed seller’s 17th century home on the banks of Lake Geneva in the Alps. Meant to depict a mother hippopotamus and her two children, each sculpture doubles as a different, working bathroom fixture. The mother opens up to become a bathtub, sink and vanity, while the baby hippos hide a toilet and bidet. Originally commissioned by the seller in the early 1990s, the playful bronzes hit the auction block for the first time on Friday.

Amazingly, this isn’t Lalanne’s first life-sized hippo piece to make a giant splash at auction within the last year. Last November, another baroque bathtub crafted by the sculptor sold for an even more outrageous $4.3 million at a Christie’s New York auction. The sky-high sale price was 25 times the $168,000 the prescient seller had purchased it for at auction more than a decade earlier.