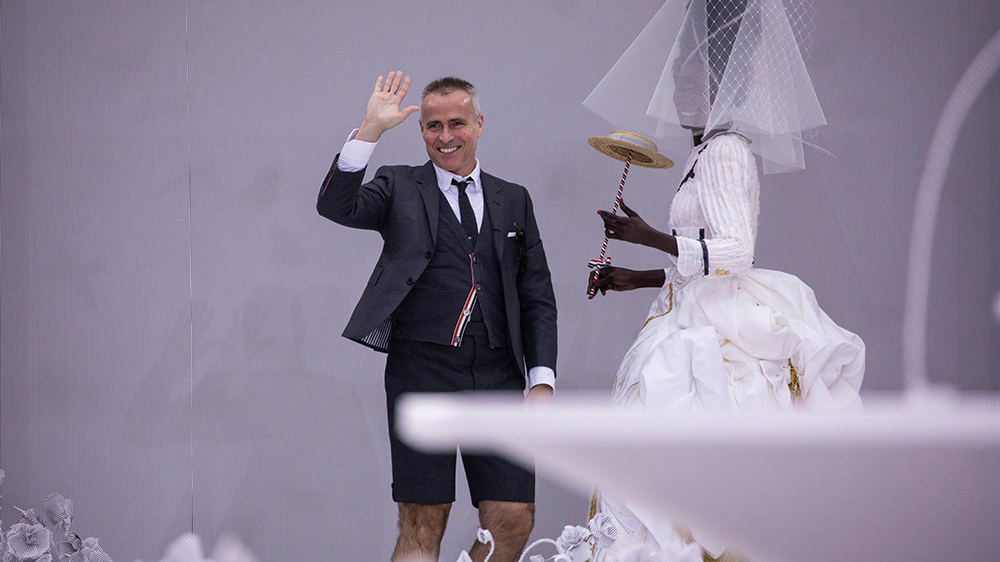 Thom Browne, the designer who built his reputation by shrinking the suit and making tailoring feel appealing to a younger generation, is looking to the future in a new collaboration with Samsung.

The announcement was made via an Instagram post on Browne’s feed that showed his signature stark blinds snapping open to reveal a dual Samsung-Thom Browne logo. Though Browne didn’t elaborate on specific details of the team up, WWD is reporting that the most likely outcome is a Browne-branded Samsung Galaxy phone. The designer is rumored to be orchestrating a special performance to celebrate the launch scheduled to take place sometime next month during New York Fashion Week.

Browne has managed to create an interesting Venn diagram of a brand that somehow specializes in buttoned-up suiting (and all the necessary accoutrement) and over-the-top, runway-only fashion at the same time. In short, he can produce a crisp Oxford shirt as readily as hot pants with codpieces and make them all seem like part of the same grayscale universe.

How he will interpret Samsung’s flagship smartphone is indeed a burning question. Browne started his brand in 2004 and managed to establish specific codes nearly from the start. One is the triple-striped grosgrain detailing fixed to nearly every garment and accessory. It would be a straightforward way to make this Galaxy unmistakably his own.

An equally pressing query is how Browne plans to stage the event set for next month. Browne and company frequently throw mind-bending affairs, many of them resembling (or aspiring to be?) performance art with a puzzling cast of characters playing off of Surrealist themes. Every runway show from the brand is more spectacular than the last. Assuming he’s aided by at least some cash from Samsung, the upcoming festivities may be Browne’s greatest yet.