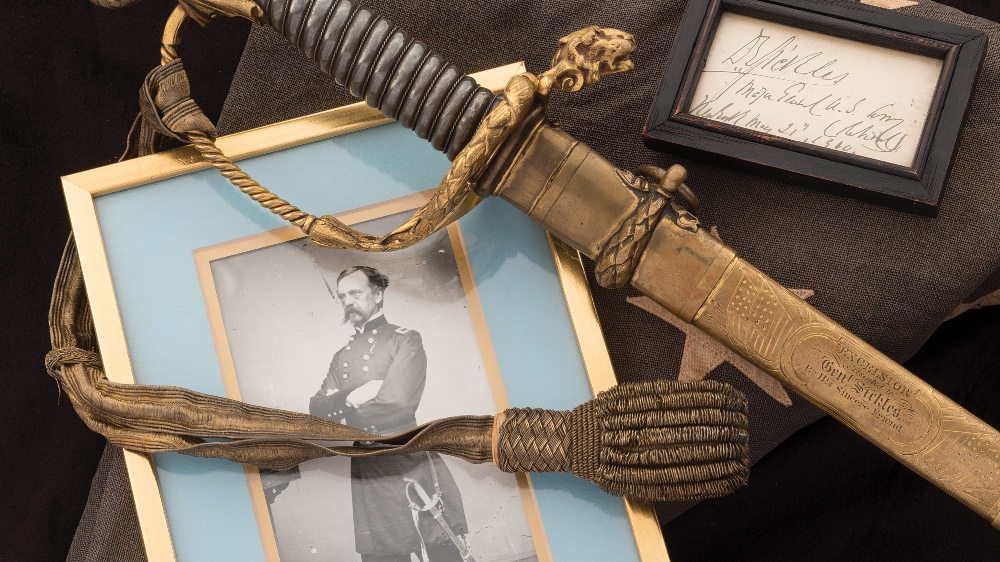 Since 1837, Tiffany & Co. has created a bevy of luxurious designs, from stunning bracelets to gem-studded necklaces—to military swords, which the jewelry house produced an entire line of back in the mid-19th century. Now one Illinois-based auctioneer is giving you the chance to snatch up two of these historical sabers.

As a part of its December Premier event, Rock Island Auction Company is selling off a plethora of antique swords and war memorabilia. Included in the prominent lots are two Civil War–era blades made by Tiffany’s, predating the brand’s foray into luxury jewelry. One of the items belonged to Union General Daniel Edgar Sickles, who fought in the Battle of Gettysburg, and dates back to the beginning of his military career in 1861. The 32-inch Excelsior Brigade sword, named for the brigade Sickles commanded during the war, has a distinctive knight pommel design, featuring a lion head quillion and patriotic motifs on both sides of the guard surrounded by floral accents. Estimated to fetch between $30,000 and $50,000, the piece also features two marks of the words “Tiffany & Co,” located on the scabbard and above the left ricasso.

The other saber is a standard officer born from Tiffany’s partnership with bladesmith company Peter D. Luneschloss from Solingen, Prussia, to supply the weapons for the Union army during the war. This model dates back to 1860 and was used by the Union Navy, featuring an iron plate in its guard with a 31-inch lightly curved saber blade. Rock Island expects this sword to bring in anywhere between $4,500 to $6,500.

Outside weaponry, the auction also features a variety of officer badges made by the jewelry maison in its lots. The selection includes seven US Navy aviator badges, five “propeller” pilot badges and two “US on shield” badges. One of the items has a handwritten message with the words “with all my love/Meg” etched on the back; its estimated value ranges from $9,000 to $14,000.

“While today Tiffany & Co. is mostly known for its fine jewelry, in the mid-19th century their work was much broader, including a catalog entirely dedicated to presentation swords,” said Joel Kolander, interactive production manager for Rock Island Auction Company, in an email to Robb Report. “They continued their artistry in fine arms, with several displayed at the 1893 Columbian Exposition, and through World War 1, fashioning pins and medals for the military.”

If you want to add a different kind of Tiffany’s item to your collection, Rock Island’s Premier Auction runs from December 9 through 11 on the auction’s online portal and, if you register ahead of time, in-person. And, if you want to catch a glimpse of the goods beforehand, there will also be an in-person preview on December 9 that’s open to public.