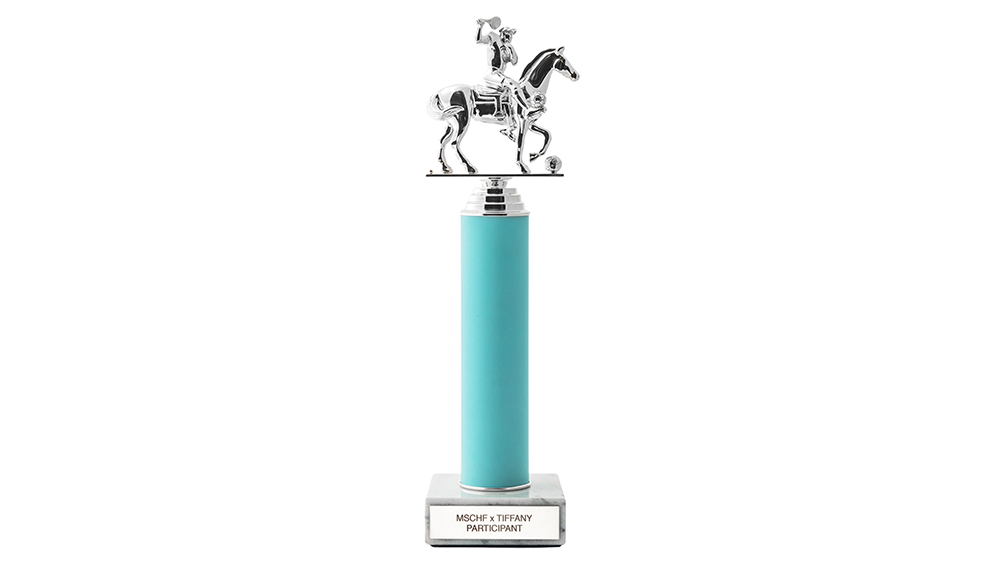 After forging some of the finest trophies in the sporting world, Tiffany & Co. has reimagined the most modest prize of all.

The luxury jeweler has joined forces with mischievous art collective MSCHF to create the “Ultimate Participation Trophy.” Limited to just 100 pieces, the exclusive award was reportedly made in celebration of Tiffany’s 160-year tradition of handcrafting sports trophies at its hollowware workshop in Cumberland, Rhode Island.

There is, of course, a little tongue-in-cheek humor at play. Participation trophies are typically cheap tchotchkes given out indiscriminately at the end of the season. It’s ironic, then, that this iteration was meticulously handcrafted by America’s most iconic jeweler and will be awarded to people who haven’t done anything to earn it.

Four months in the making, each trophy was fashioned from sterling silver and stainless steel using age-old techniques, such as casting, silversmithing, hand engraving, polishing and finishing. Measuring 11.5 inches tall, the award features an equestrian up top surrounded by a host of sports equipment. Each piece represents an existing Tiffany trophy, according to MSCHF. Elsewhere, the trophy sports a hefty white marble base, a co-branded plaque and a good dose of Tiffany’s signature blue.

A close-up of the limited-edition trophy.  Tiffany & Co.

The duo is having a little fun with the drop itself, too. The first three buyers will receive first, second and third trophies, respectively. All other buyers will receive the standard participation editions. Another twist, you won’t know which trophy you’re getting until it arrives at your doorstep. It may come off as a mockery of fair competition to some, but as the accompanying manifesto states: “Those who can’t play, pay!”

While Tiffany & Co. has a storied history of creating iconic trophies, such as the Commissioner’s Trophy, the Super Bowl’s Vince Lombardi Trophy and the Larry O’Brien trophy, the jeweler has embarked on an array of playful collabs of late. Similarly, MSCHF, which The New York Times describes as the Banksys of consumer culture, has a rep for pushing boundaries with things like “Jesus Shoes” filled with holy water and “Birkinstock” sandals made from actual Birkins. Last March, the Brooklyn-based collective was even sued by Nike for selling rapper Lil Nas X’s blood-filled “Satan shoes.”

Love them or hate them, MSCHF’s controversial creations have cult status and releases typically sell out in minutes. This should be no exception.

Priced at $1,000, the Ultimate Participation Trophy will be available starting May 2 at 11 am.