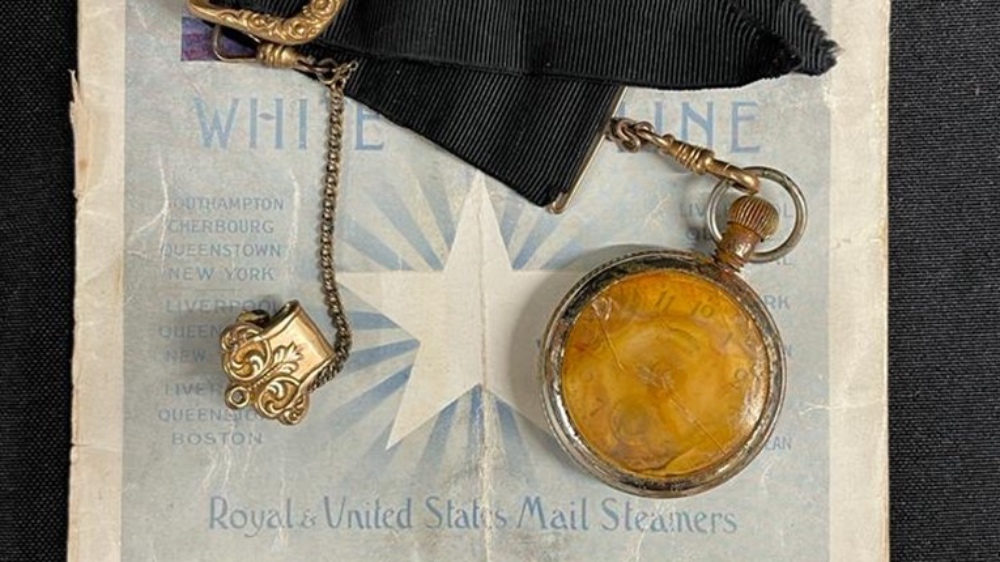 A gilded pocket watch that survived the sinking of RMS Titanic against all odds has just sold for six figures at auction.

The timepiece in question belonged to postal clerk Oscar Scott Woody, who was working aboard the passenger liner when it struck that fateful iceberg on April 14, 1912. In fact, the watch is actually frozen at the time he went into the cold North Atlantic with more than 1,500 other ill-fated passengers. Woody’s body was recovered from the ocean 10 days later, and his waterlogged pocket watch was returned to his wife Leila the following month.

Some 110 years on, the relic sold for $116,000 at a Henry Aldrige & Sons auction over the weekend in the small market town of Devizes, England. The watch’s screen is shattered and both the minute and second hands are missing. There is, however, a faint imprint of a hand visible between four and five numerals, which coincides with reports that the ship sunk at 2:21 am. Woody and his fellow mail clerks reportedly died trying to save sacks of letters from the flooded storage room to no avail. He had just celebrated his 44th birthday aboard the ship.

The timepiece was only the tip of the iceberg in terms of the Titanic memorabilia on offer at last Saturday’s auction. A list of first-class passengers sold for $48,000, while a first-class menu featuring “plover on toast” went for $60,000. Other highlights included an elegant dessert plate that realized just over $23,000 and an “a la carte” section of the menu that achieved more than $27,000.

Henry Aldrige & Sons has developed a reputation for collecting, authenticating and auctioning vintage finds from the Titanic. In 2017, the family-owned auction house sold a fur coat owned by a first-class stewardess for $178,000 and a letter by passenger Oscar Holverson for nearly $150,000. It’s further proof that Titanic still piques interest even a century after sinking.