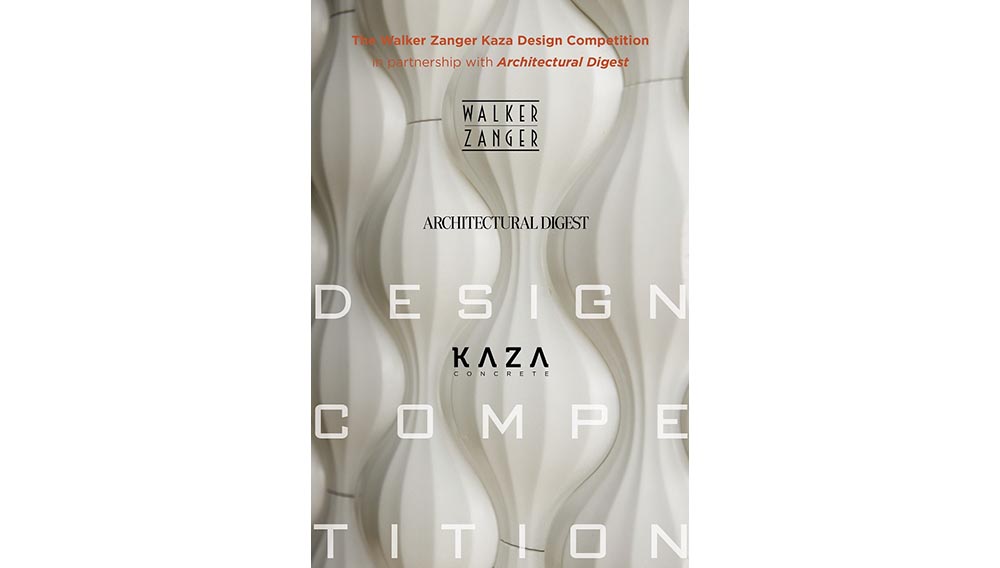 “We are thrilled to present such experienced and accomplished judges for the Kaza Design Competition who will ultimately select the winning tile design,” said Walker Zanger Vice President of Design and Marketing Jared Becker.

The Kaza Design Competition offers aspiring and established designers and architects the chance to have their original tile design added to Walker Zanger’s Kaza collection and earn royalties from the product’s sales.

“Architectural Digest is proud to partner with Walker Zanger on their inaugural competition, supporting the design community with a great opportunity for a designer or architect to have their product manufactured,” said Giulio Capua, Architectural Digest Publisher and Chief Revenue Officer. “We look forward to seeing the creativity that comes from the entries and great design being turned into a tangible product.”

Entries for the Kaza Design Competition will be accepted until September 30, and the winner will be announced in November at a celebratory event in New York City. For more information about the panel of judges, please visit walkerzanger.com/kazadesigncompetition.

For more than 60 years, Walker Zanger, the world’s most comprehensive stone and tile company, has been combining traditional tile-making techniques with a modern sophistication that transcends any singular design style. A leading choice for design professionals and consumers, Walker Zanger natural stone and tile products can be found in luxury homes, trendy boutiques, lavish spas and resorts, famed museums and fine restaurants around the globe. Walker Zanger is available through 14 beautiful showrooms and more than 150 authorized dealers nationwide. To learn more about Walker Zanger and its line of products, visit www.walkerzanger.com.

Architectural Digest is the international design authority. AD provides exclusive access to the world’s most beautiful homes and the fascinating people who live in them, bringing its audience a wealth of information on architecture and interior design, art and antiques, travel destinations, and extraordinary products; its AD100 list of top architects and designers is one of the industry’s most relied-upon indexes of talent. Every day Architectural Digest inspires millions of readers to redesign and refresh their lives through a multiplatform presence that includes print and digital editions, social media, signature events, and the brand’s website, archdigest.com.