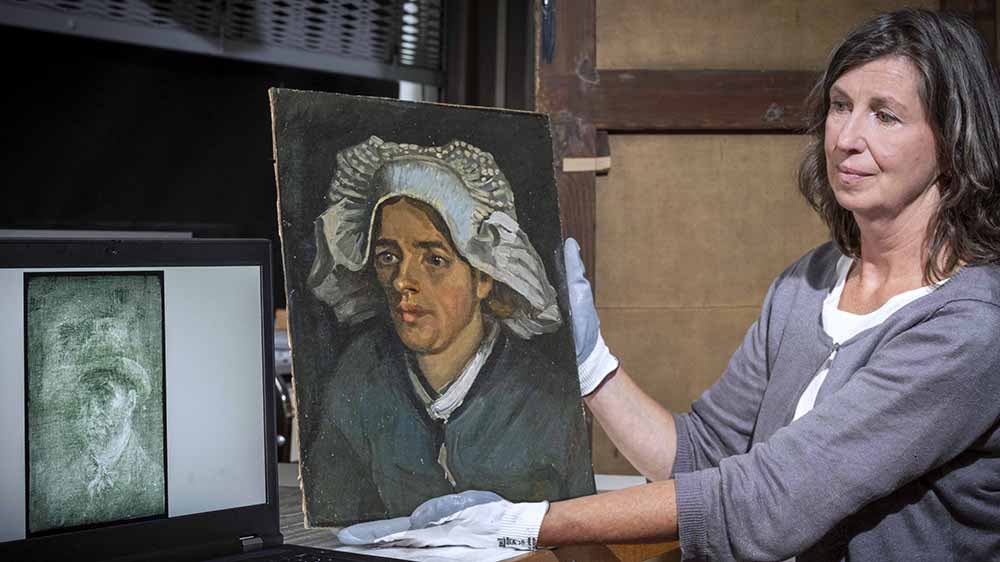 For many museums, showcasing a work by Vincent van Gogh is enough of a win. But the National Galleries of Scotland has just gotten something even better: Conservators recently discovered a previously unknown van Gogh self-portrait during an X-ray of one of his other paintings.

When doing a routine examination of the Dutch artist’s Head of a Peasant Woman before an upcoming exhibition at the Royal Scottish Academy in Edinburgh, the museum came across a mysterious image. On the back of the canvas, covered by layers of glue and cardboard, was a depiction of a bearded man in a brimmed hat and neckerchief, which the conservators believe to be van Gogh himself.

“Moments like this are incredibly rare,” Frances Fowle, the senior curator of French art at the National Galleries, said in a statement. “What an incredible gift for Scotland, and one that will forever be in the care of the National Galleries. We are very excited to share this thrilling discovery in our big summer exhibition ‘A Taste for Impressionism.’”

Van Gogh was known for reusing canvases, often as a means of saving money. Instead of painting over works, however, the artist would use the opposite side of the canvas. Many of these verso portraits have been discovered, with five examples hanging in Amsterdam’s Van Gogh Museum and others housed at the Metropolitan Museum of Art, the Wadsworth Atheneum Museum of Art in Connecticut and the Kunstmuseum Den Haag in the Hague.

Researchers are hoping that they’ll be able to fully uncover the newly discovered portrait, although removing the glue and cardboard will require delicate work. In the meantime, they’ll show off the exciting find via the X-ray image, which will sit in a specially crafted lightbox at the upcoming Royal Scottish Academy exhibit.

“Knowing that [the self-portrait is] there—in a painting that’s in the National Galleries of Scotland, in a collection that belongs to the people of Scotland—is incredibly important and significant,” Stevenson said in an interview that the National Galleries released. “Those images of the artist by the artist have a special quality—they’re very enigmatic. They’re giving us an insight into how [the artist is] thinking of themselves.”

“A Taste for Impressionism” will be on view from July 30 to November 13.